When I Think About You I Cut Myself

With Thanksgiving occurring this week and our shuffling classes around I've just realized that I  have to get this post out ASAP because we have class this evening.  Therefore we're just jumping right on in starting with Linda F's Beach Scene Panel.   It's her very own original design and she's done wonders with it as you can clearly see for yourself.  We all start somewhere and I can guarantee you that my first original pattern wasn't as complex as this one is! 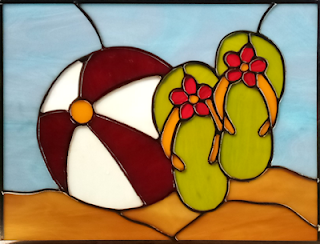 Next we look at Annette's Joy Suncatcher complete with Holly Berries.  The 'problem' with this was deciding what color to make the letters out of.  Red or green are the 'obvious' first choices until you realize that the red berries would get lost in red glass and that the green leaves would disappear if the letters were green.  Amber was the choice Annette went with but the fluorescent lighting I used for the picture makes it look more yellow than it actually is.    In the end, Annette made quick work of this project and has taken home a new Christmas pattern that we'll reveal to you with when she returns a week from now. 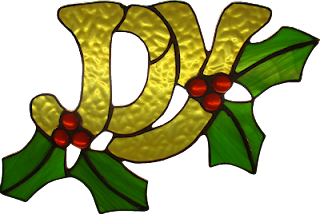 Lisa made a Cardinal and a Flower suncatcher that she wanted to mount into a hoop to make one single suncatcher.  Even though they are two separate entities you'd swear that these were designed to compliment each other in a single scene right from the very start.  But that's not all that Lisa finished this week... 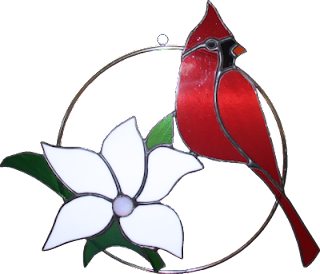 Lisa also completed seven nightlights!  Three Deer Heads, two Soccer Balls and a pair of softballs.  She plans on doing a little painting on some of these to add some extra detail but she's doing that at home so what you see below are the nightlights as they appeared as they left our shop. 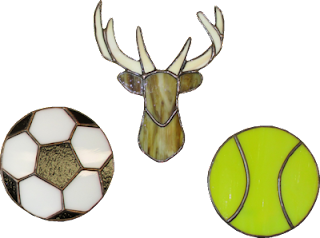 Sheri's becoming a pro when it comes to making Hummingbird Suncatchers.   These were an order that she cut out, ground, and tacked together while at home.   She soldered them while she was in class and by now they're most likely residing with their owner! 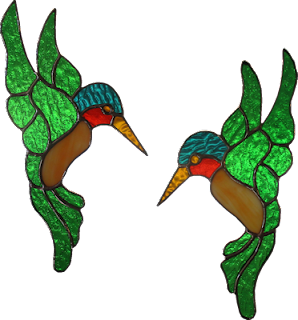 Shawn added solder to her latest trio of Christmas Ornaments which finished them up and allowed us to share their final picture with you.  Next up for Shawn are (imagine a drum roll playing here)... more ornaments! 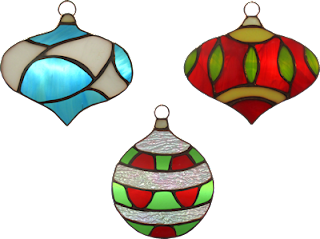 I could be wrong but I believe that Betty has completed her final three cutlery Dragonflies. Here's a look at one of them that flew out of the door with her. 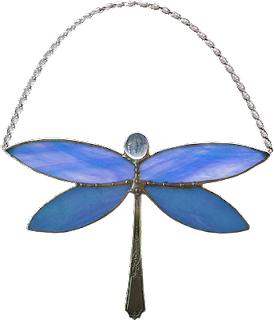 I had an order for two Beveled Crosses so I'm picturing them here to use as inspiration amongst our students.  These have yet to be made in some of our classes and when it comes down to quick yet beautiful gifts well, these certainly fit the bill. 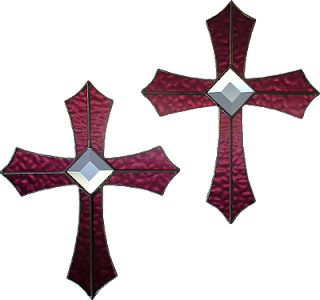 That Cross order also included two large Butterfly Lawn Ornaments and when our Wednesday morning class saw these on the table I ended up passing out three patterns for them.  Everyone falls in love with these once they see them in person. 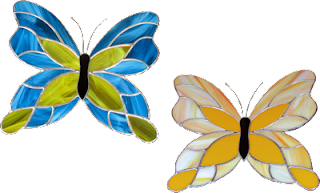 Linda F actually started cutting the glass for this window when she walked into class and by the time the left she had all but 10 pieces cut out and ready to be ground.  She's flying through this project and I know that it won't take her long to get it ground as well.  I think this would have been completely cut out had she not been stumped on what color to use for her final accent pieces.

This mouth watering Christmas Candy Cane is being made by Susan R who also managed to get her all of her glass  cut out and most of it ground.  At the rate of speed she's traveling on this it won't be all that long before we get to see this hanging up with some light behind it.

Kerry began working on a Santa Face Window that's driving everyone crazy in all of the classes.   If I hear "Ohhhh, I want to make that" one more time....  LOL!  Color-wise this is very simple to do since it's only made up  of red, white, green and flesh.  Faces can be tricky though and it takes both time a patience to make sure that you don't over grind anything.   That said, Kerry already has this looking like a Santa Claus before the grinding has even touched a piece of glass.. 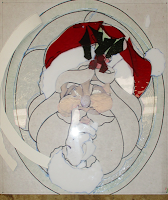 Next up we have Shelley who has begun working on her favorite subject again-- a Mermaid!   She's modified the pattern slightly but there's no mistaking  this gorgeous creature for a sea dragon, that's for sure. 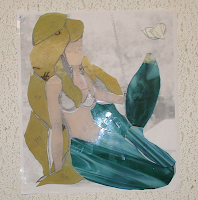 The pictures that you look at here in our posts  can be very deceiving when it comes to size.  Yes, this may look like a full sized window but Cindy's latest Fleur De Lis is actually a very detailed panel which is only  ten  inches wide by ten inches tall  and that includes the double borders!  Cindy revels in small panels with intricate pieces. 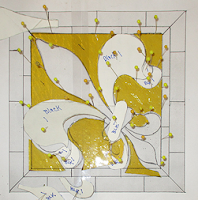 Jan's Old Fashioned Santa Claus is starting to coming together now.   What you don't see (yet) are the green leaves that will make up the Christmas Tree that Santa is carrying because those won't be cut into place until Jan grinds this window and has everything fitting together just right.  Making it in this manor (as we discussed in last week's tip) is the easiest way to get a perfect fit with minimal grinding required. And once all of those green pieces are  added you'll easily see the Christmas tree under Santa's arm. 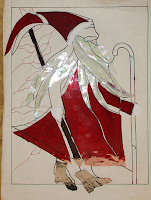 Betty is all cut and ground and just waiting to get her Nativity Scene wrapped and tacked so she can add the borders all around this window.  She'll be using a dark brown wood color for the border pieces and then a green/brown mix for the left and right upper corner sections.

Judy officially has all of the grinding finished on her Louisiana Hot Sauce Window and is now set to begin wrapping all of those pieces.  I know she doesn't enjoy foiling very much but I honestly feel as though the majority of the work is behind me when I get to this stage of a windows creation.  You can even see exactly what the finished window will look like at this stage of the game. 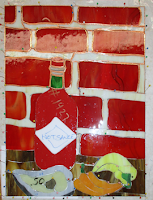 He may not have any pupils in the whites of his eyes (yet) but you can't miss the fact that this is Dr. Seuss' Christmas Grinch.  Cheryl has really caught on to the grinding process and you can certainly see that in the picture below. 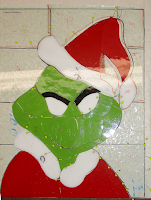 I didn't get a picture of Bee's current project but this is the logo that we drew the pattern from.  She already has the wolves heads cut out as well as some of the green leaves which means that Bee is adding some much needed color throughout her interpretation of this design. 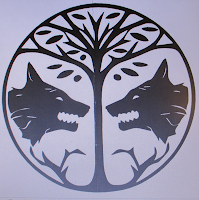 With just a small S left to go in the letters that form the abbreviation for the word ' Established', Susan D appears to be making excellent headway.  The numbers are going to be a piece of cake to grind because they are practically huge when compared to the letters in this window.

Ho Ho Ho.   That's one 'Ho' for each of Linda L's Santa faces.   She's currently grinding glass globs into position for his eyes and the Santa on the bottom left is ready for solder.  Those blue ares are certainly striking but wait until you see them after they have their black pupils painted on the.  It really makes a HUGE difference! 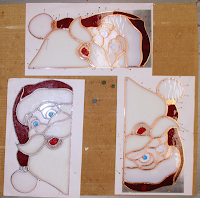 With her second Sugar Skull eye coming together I reminded Sheri that she really ought to wrap and tack that first eye before something happens to it and the pieces get scattered.  She said that she would have wrapped them but that she didn't have the correct size foil.   I had previously mentioned that she'll need to use 5/32 foil on some of this but Sheri thought that I said on all of it.  Now that she realizes that the smaller foil is only for the white glass she can get some of these small pieces locked into place.

Mary Grace had a slight issue with one of the long pieces of glass for her Peacock window when it snapped in half .  The problem was that she no longer had  a piece of glass big enough to re-cut on.  Here's the easy fix to that problem: just grind the straight break line into a curve and then re-cut the other half of the piece (which is now much smaller than the original piece was).   This technique makes it appear as though the newly created lead line was always a part of the pattern.  And that is why Mary Grace has a hole in the middle of her peacock right now.   We'll fill that in next week and no one will ever know the difference.

Ann's got her next batch of Christmas Ornaments all ground and she even has a few of them wrapped already as well.   I suspect that she'll have at least a few of these completed when she comes back in giving her time to make even more of these for the holidays (if she chooses to).

Here's a close up of side two of MiMi's latest Hexa-long window.   I have to say that these are a blast to solder on.  It's no wonder MiMi is managing to still have fun while making these!

With three completed Ornaments under her belt this week Shawn has begun cutting out two new ornaments with a new color scheme.   These ornaments are so easy to fill in with colors because just about every color out there works in these patterns.

With everything all ground and fitting together perfectly, Martha was able to begin foiling the pieces in her Build Your Life Window.  My hat goes off to her because I know she did NOT want to grind all of those letters (they did give her a tough time) but she did them and they look wonderful.  Also, I have no doubt that this window will be finished in time for Christmas. 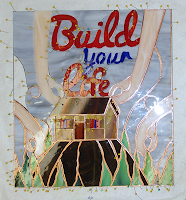 And in the end, with all of the broken glass knocked out and then replaced in her huge Beveled window, Barbara is now ready to solder this, wash it, and take it home again.

I would have two more pictures to show you but Mary and Tracey managed to run out the door before I got a chance to snap pictures of their projects.  Mary was working on grinding two Christmas Ornament Suncatchers while Tracey actually completed either two or three of her own ornaments.  Either they have to give me a warning that they are leaving or I  have to pay more attention.  (Mostly it's the later.)
As I said at the beginning of this post I was a little short on time in putting this together but everything should return back to normal next week.  I even promise to have another tip of the week so be sure to come on back next Monday.
Paul
Bayou Salé GlassWorks

Posted by Bayou Salé GlassWorks at 11:15 AM