But I'm Never On Point

In the past few weeks we've had a few issues with students having problems with their projects taking patina.  Largely this is due to people rushing to get things done in the last few minutes of class but the problem in each case has always been one of two bad conditions.  First, your window MUST be completely cleaned before applying the patina.  Use the scrubby side of a sponge and DON'T USE SOAP TO REMOVE THE FLUX!  Just use water.  Next dry the project thoroughly (we don't want excess water to dilute the patina solution) and remember to shake the patina bottle vigorously before applying it.   It may take some extra time to add these few  simple steps but it's sure quicker than spending a half an hour trying to get your patina to take.

So first off in our completed projects we see that Martha has finished her Build Your Life Window and I must say that her border glass is as beautiful as the  subject is.  She took her time on this and her attention to detail shines through, especially in her lettering (which is never easy to accomplish).  I know she found this to be hard work but her patience and perseverance have really paid off and she now has another big feather in her stained glass cap. 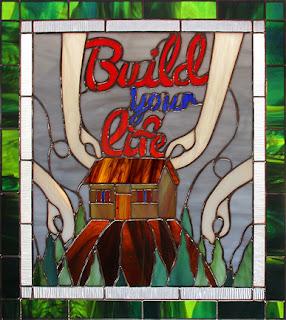 And now for something completely different.  This is Linda L's Flower Pot Succulent which was made in three layers and then tacked together to form one plant which resides in an actual flower pot.   The three layers were done so that leaves could be seen through any of the clear leaves in front of them to create shading that you'd never achieve by making this as a flat piece of glass.   The end result never needs water and sparkles in the sunlight! 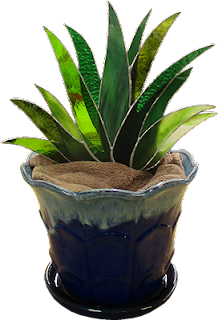 Here you can see how the layers overlap with one another. 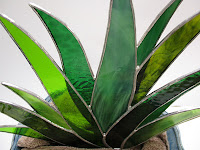 Annette made this adorable Christmas Gnome (I think it's a gnome!) and it turned out better than I ever expected.  I also believe that I know of another student who might REALLY want to do one of these! 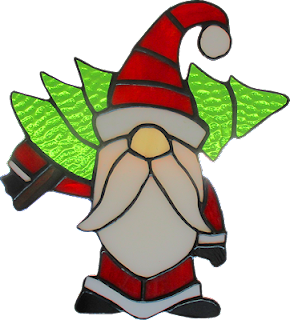 Lisa's Georgia Window was almost completed last week (it only needed soldering) but you couldn't see anything but a black border and some red in the center of if.  Now that it's off the paper and back lit you can plainly see the clear bevels in the outer  border and the wispy white glass that she used for the background.   "I said just an old sweet song keeps Georgia on my mind." 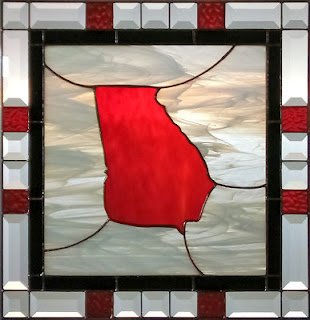 And here's Cindy's Fleur De Lis Panel.  It features the same black inner border that Lisa used but Cindy went one step further and made the Fleur De Lis itself out of the black as well.   This gives her panel a distinctive silhouette effect either with or without light behind it.  It's stunning and small enough to be covered by a single piece of paper. 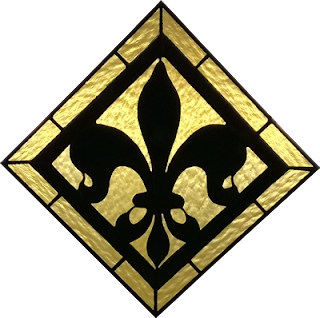 Cindy also completed three Unicorn Suncatchers to which she painted eyes, noses, and mouths upon.  Made using a rainbow of pastel colors I'm thinking that these Unicorns are females because of the color choice. 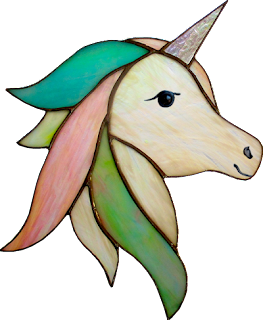 Cindy isn't the only person to complete multiple  projects this week-- Annette did as well.  Here are the two Angels and the latest Joy Suncatcher that Annette finished along with her Gnome Carrying a Christmas Tree.  She really knocks these things out quickly! 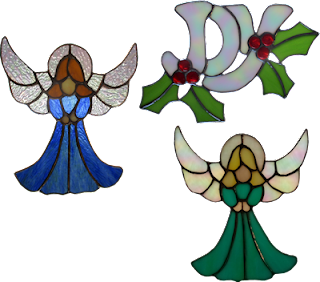 Our last completed piece of the week was done by me and since it's Christmas I thought I'd share it here as a little bit of inspiration for all of our students.     The holly leaves and berries were an afterthought and are actually overlaid on top of the panel but when I do this again I will surely cut it into the actual glass. 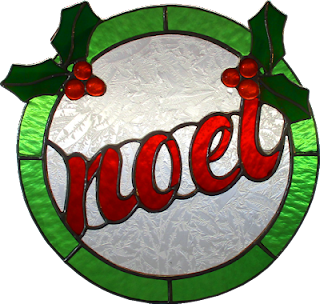 First up on out projects that are still under construction are Steve's 3D Chickens.  The legs are made out of wire and normally get a bend along with another wire soldered onto it which form the feet (or claw) of the bird and allows it to stand upright on a table.  Steve is going in another direction with his though.   He'll be mounting these on a board and I can't wait to show you what they will look like once all of his chickens are assembled and hatched. 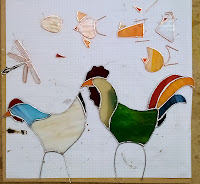 With one side of her Kaleidoscope ground and wrapped in copper foil Melissa is ready to begin working on the second side of her three sided project.  The scene that you see below was done in darker, dreary colors to signify a stormy day while the second side will be the same scene with a bright sunshiny day all around it.  The third side will tie everything together and we'll show you that once Melissa gets to it.

Lisa also began working on a new set of panels for her next Lantern.  It looks like she's got three sides all cut out which means that someone (Lisa) was busy as a bee all throughout class.   She's quickly  becoming the Lantern Queen of New Orleans. 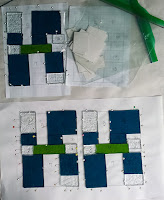 Susan D's got just about everything wrapped for her Establish 1965 Plaque.  In fact, she even managed to straighten out the E before she tacked her pieces together as originally planned.  I have a sneaking suspicion that this will be completed when we see it again next week. 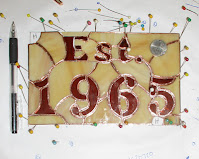 Up next we see that Jan's Old Time Santa really looks like a Santa Claus now.  He's currently holding a staff and what appears to be a stick but that stick will turn into a Christmas tree once her few remaining pieces are ground and she grinds green leaves into the background and into Santa's body. 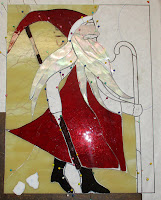 Mary Grace spent her time wrapping  the pieces for her Peacock so we could solidify everything by tacking it together (which she has now done).  This will help make fitting the remaining pieces easier since individual pieces won't be able to wiggle around.

Mary's back but on a new day and time.  Now that she's joined the Thursday morning class she's been reunited with Jan and Barbara, her glass friends from long ago (even though Barbara doesn't know it yet).  This week she resumed work on her pair of Christmas Ornaments and by the end of the day she had them both ground and wrapped in foil.   It looks like somebody will be soldering when she comes back in next week!

Susan R has one of her pair of angled Poinsettia Lawn Ornaments all soldered and is ready to begin work on the second one.   We only need to attach a stake to the back side of her top Poinsettia so it will be ready to head out the door and decorate her yard when she comes back in.

And here's Kerry's Santa Claus Face all ready for solder.   The eyes were the last thing that got tacked into position and since  Santa doesn't appear to be squinting or look cross eyed I'd say that this is as good as it could possibly be.  That said, it will look even better next week once it's soldered. 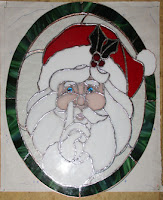 Ann is evening out things in her family by making five more Christmas Ornament Suncatchers to give to family members.  She's really gotten good at making these as you can tell by looking at all of the work that she accomplished in just one night.  It's hard to believe that she even left an hour earlier than she needed to!

With Christmas fast approaching we still have a few projects to get rushed out of the door but, as always, I know we'll get the ones that need to be finished completed before Christmas arrives.  It's amazing how quickly that holidays gets here though, isn't it?

Posted by Bayou Salé GlassWorks at 7:55 AM