You're A Clean One, Mr. Grinch

Here's a quick and simple tip to celebrate the end of 2021 and the start of 2022.  We all know that we have to foil our pieces of glass after they've been ground but did you know that the starting point for your foil matters?  As a rule of thumb you want to begin (and therefor end) your foil on the straightest side of the piece you are wrapping.   You also want to start near a corner rather than at the center of the side you are starting on.  Most importantly, you NEVER want to start your foil in the center of a deep curve.

In the picture below the red arrows point to where you DON'T want your foil starting and stopping.   The   yellow arrows point to an area where it's safe to begin foiling and the green arrows show you the best place to start.  All of this helps to stop your foil from splitting while going around curves, and to help make the trimming of any foil misalignments (otherwise known as stair steps). 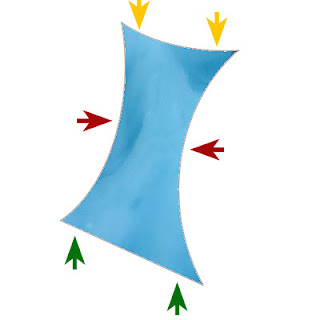 So first up this week we have Melissa's incredible complex Kaleidoscope that she made as a gift for a friend who has lost someone.   Melissa knew that the rainbow images that this creates might help bring about a smile.  She also had the idea of using one of the three sides to show a cloudy day with a second side showing the same scene but with the sun shining through making the world bright again.   Then, as the icing on the cake, Melissa had the lyrics to the song 'I Can See Clearly Now' printed onto the glass on the third side of the triangular Kaleidoscope.  The three sides come together telling the viewer that although things look bleak now, they will get better. 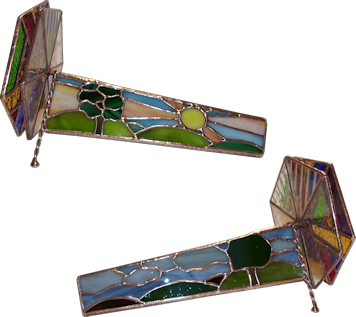 Here's a look at the underside of the Kaleidoscope so you can see the lyrics on it.  Yes it starts off a little tiny but in person it's easy to read.  I also tried to take a picture of the view through the Kaleidoscope.   The image doesn't do justice to the actual shifting colors and textures but at least you get an idea of what happens when you look through this piece of art.  Lastly, Melissa incorporated twisted wire legs onto the front of the scope (which she loved learning how to do). 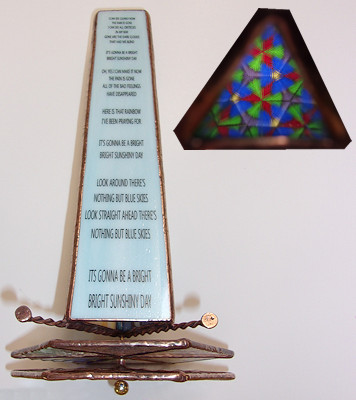 Susan D says, "Just say no to letters and numbers, especially small letters and numbers!"  but this turned out so very well for a 7 inch wide window.   Working on something this small requires patience and even though Susan says she doesn't have any, she's proven here that she does. 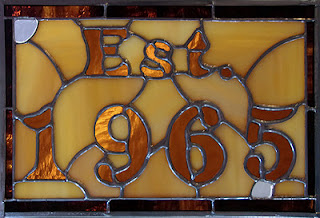 Cheryl got her Grinch Window completed and it's a doozy.  Her soldering was so very good on this that I just have to give her a pat on the back in public!   With all the Grinch items having been made in the shop people who are not familiar with the book, or cartoon, or even the movie have asked why someone would want to make something so---un-beautiful.  Well, this quote by the Grinch sums a lot of the answer up for me:
“Maybe Christmas (he thought) doesn’t come from a store. Maybe Christmas perhaps means a little bit more.” 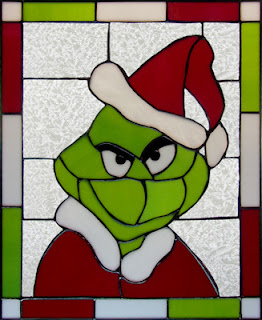 Next up, Kerry came into class hoping that he could complete the Grinch hand that he cut out last week and he also finished his Grinch inspired suncatcher with plenty of time to spare. 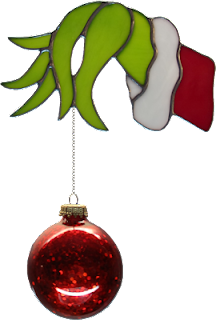 Ann's final four Christmas Ornaments were also finished just in time for Christmas.  I guess I need to say that everything which NEEDED to be done in time for the 25th was completed.   Although Ann may make more of these I believe that won't happen for at least a few more months! 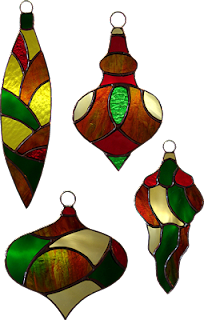 Like I said, Mr Grinch was very popular this year.  Our last Grinch Hand of the season was made by Betty who actually walked out of the door with five of these.   I guess you could say that they're always nice to have on hand... 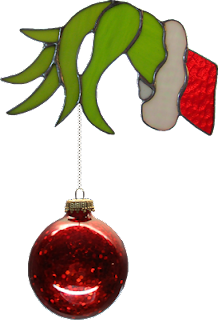 Susan R has begun working on a Wine and Grapes Hoop.   This one will incorporate a lot of wire work and the end result is going to be stunning for sure.   I'm expecting Susan to start a trend with this project. 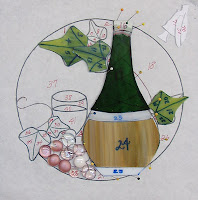 Steve sent me a picture last week saying that he was going o do a door and to be honest I thought that we was going to be making an insert for a full sized door.  Nope, not the case.  This window is a stained glass representation of the full door from his grandmother's house.   As you can see below, he's already nailed it!

Judy spend her last class of the year beginning a Wedding box.  She's got the top completed and that means that she'll easily finish this when she returns because there are only five pieces of glass left to cut and that will happen using the strip cutter for four of them so, hey, she's got this! 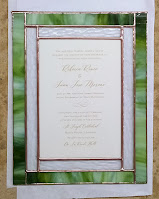 Lisa was as busy as a bee making a Honeycomb  with honey dripping all around it.  What makes this different is that it will be mounted into a wooden plank.  It already fits into the routed out section of the plank and what you are actually looking at below is the back side.  I have a sneaking suspicion that we'll see the front of this in completed form when Lisa returns.

Martha has her first Franklin Lamp Post all ground and fitting together perfectly.   Next she'll wrap and tack these together and then hopefully cut her background from one piece of glass (which should go quickly!) 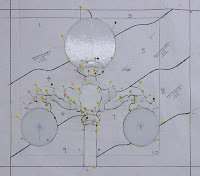 With all of the glass cut for her latest Beveled Window, Barbara has only two sides of her final border left to wrap.  Once that's done she can solder this and then take it home.  These beveled windows always go quickly and I must thank Barbara for proving my point!

Here's my latest artsy photograph of MiMi's latest Octagon Window Insert.  There are a sea of pins involved in this and that's why MiMi gets these to fit together so perfectly.  The less things move, or slide around, the easier things will go when you tack your window together.

Linda's got her four suncatchers just about foiled and ready to be tacked.  Also, Linda has her mind made up on the size and design of her beach scene window.  It's almost completely drawn up at this point and surely will be upon her return so she's going to want to finish these up quickly so she can start off the new year with a new window. 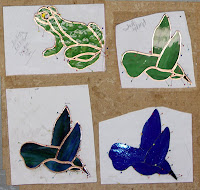 Lastly we see that Shelley began working on a Christmas Ornament of her own.   She really just came in to see all of her stained glass friends and wish them all a Merry Christmas and a Happy New Year (as well as  partake in some Christmas Food).  A little while after class started she thought she'd do a little something and it didn't take her long to get her ornament this far along but then the S..L..O..W and somewhat depressing classic Christmas music that was playing put her to sleep so she ended up taking this ornament home to finish there.  Needless to say, we ended up switching the music for some faster paced dance tunes to liven things up! 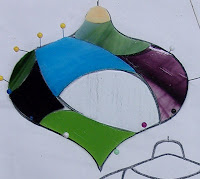 And that brings us to the end of our final Blog entry for 2021.  We won't have a post  next week but we WILL be back the following week with new projects AND new students!
Paul
Bayou Salé GlassWorks