It's been another hectic week so were just jumping straight into things here starting with Susan R's Girl On A Swing.   This piece took on a life of its own after Susan decided that it looked somewhat barren and added the tree limb and the green ground below the girl.   The hoop does EXACTLY what it's supposed to do-- provide an open airiness while holding the scene together.  Doesn't this look as though it's floating??? Bravo! 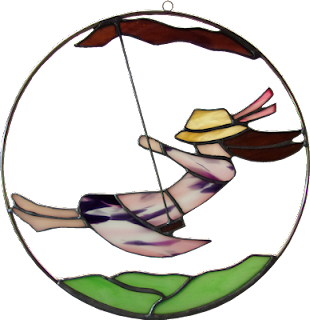 Lara decided to make her Wrought Iron Cross using two different yet similar colored sheets of glass.   Here's the kicker-- aside from the four pieces that make up the blue diamond in the center the other pieces of blue come from the same sheet of glass that the rest of the cross was cut from.  Lara carefully positioned each pattern piece on the various colors that made up the multicolored sheet of glass that she picked for this cross.   Her careful planning makes this look incredible. 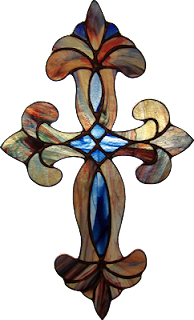 Linda F managed to get her first LSU Plaque finished.   All it needed was some channel around the edges.   I think the simple tweaks that we made on this pattern elevate it from nice to wonderful (as well as being completely steadfast.)  Of course, Linda's workmanship also factors greatly into its awesomeness!

Let has been a busy woman!   Her Owl and her Sunflower Heart are amazing pieces of work especially when you take into consideration just how new she is to the stained glass game.  The all too common problem of a ragged edged heart was completely avoided by Let as she ground and  aligned each piece to fit perfectly together. 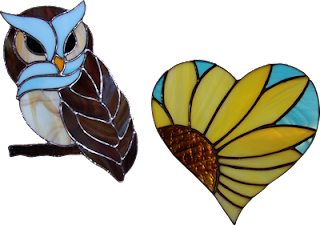 Robert began a new Door Insert this week and he's well on his way now that the design has been drawn up and his bevels are wrapped.   I always insist that a bevel border be tacked together before doing any other work on the window so the rest of the pieces can be ground to fit within the framework of the bevels.   It may sound like you're working backwards but things just fit together so much more perfectly when you use this method.   There's nothing worse than looking at a window with a beveled border that doesn't line up correctly.

Betty has got three Rosebud panels coming together.  She's already got two of them ground with the third one being very near to completion.   She also has her border pieces cut into strips and if she can get these three windows wrapped in foil and get the front sides soldered I think she'll easily have these completed upon her return next week. 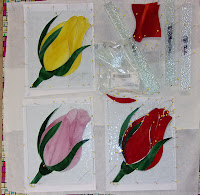 Martha has really stepped up her game because she seems to come in with a new window just about each week.  This butterfly is ready to be foiled and soldered when she comes back in and this is only the first time we're seeing it!   The reason she was able to grind this so quickly was because her cutting was so exact.   Careful cutting may take a little more time to get your pieces all cut out but it speeds up the grinding process so much that you actually end up saving time. 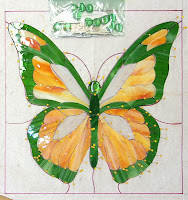 With both sides soldered on her Peacock Window Mary Grace is very close to washing and coloring this.   The only thing left to do is add the channel that will surround the window and replace the one piece of glass that was accidentally cut from the wrong color.  She's already got the bad piece knocked out so I know we'll see this completed upon her return.

Mary likes her Hummingbird and Flower Panel so much that she's going to put a second one together right after she finishes this one.   She got her background and border cut out this week and then even got it all tacked together which means that this is very close to being finished.   Expect to see another one of these being cut out real soon now. 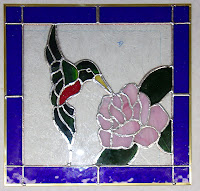 Cheryl's Birdhouse is also well under construction as she completed the front and back of the house and then moved along to cutting and grinding the brown pieces of glass that make up the roof of the bird house.   The roof will be very interesting because it's made up of six overlapping slats (three per side) that have been wrapped in scalloped foil.  We'll show you just what that will look like when you see this again next week. 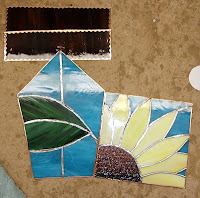 June got her large Rooster Suncatcher completely ground  and has moved along to the foiling phase of its creation.   She's taken it home so she can wrap it before she comes back in and therefore hopefully get this completed upon her return.  It will be close but as long as it's wrapped in foil when she walks in the door, I think that she can do it. 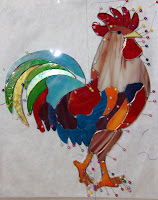 It's very hard to see that Fractures and Streamers glass that Susan D is using for the background of her Fall Window but it's there.   The colors in the F&S glass are perfect for this 'fall' application and I think we'll see the opened areas in the center of this window filled in when Susan returns next week.

With the front and back side of his Shrimp De Lis Window soldered all Kerry has left to do is add a channel and a little wire work that will really set these shrimp off.  Look out because the end is near! 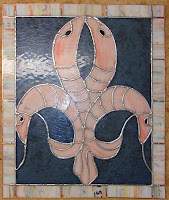 Wow, is Annette's Transom Window is really coming together now or what?  There are just 6 pieces of background left to cut and then she'll move along to begin work on the two borders that will finish this off.  We all know how quickly borders go so this I think it's safe to say that this window is nearly finished. 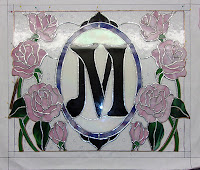 The crab may not look like much right now but Linda L's Beach Scene has come alive with color now that the crab has been cut into the sand.   It still needs some eyes painted on it to really finish it off but that will easily happen next week.  This appears to be another window that will be completed when we next see it.. 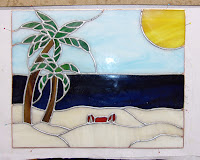 And last but not least is another Hexagon Window that MiMi has all ground and fitted together.  This even has two rows wrapped in copper foil already! These are really flying off of the 'press' quickly now so before you know it MiMi will be cutting curves again. 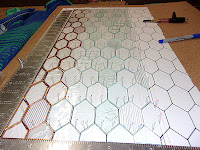 And there you have it.   There's been a lot of excellent work done this week and I hope this post showcased it well.