Since we don't have any completed projects this week I went ahead and put the windows we just installed at the end of this update. We'll be seeing some finished student projects shortly as more than a few students are finishing up with their work. And Jane's lamp is a good example of that now that it's nearly complete. Although it's the same pattern as the last one she made she's changed the glass this time around and made it out of entirely new colors. Jane plans on making a third lamp with the same mold, but with a different pattern that involves a flower border. All that this lamp needs is a cap and then we'll see it completed. 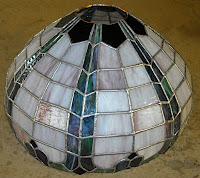 Jane not only got her lamp almost finished -- she also worked on this butterfly lawn ornament. She got it all cut and ground during class so this is another project we should see finished very soon. 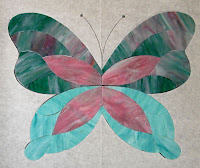 Grace began making another one of her Fleur De Lis windows. She wasn't sure what she was going to make when she came into class so she started looking through some of the patterns we had laying around. When she stumbled upon this one she decided that she'd like to do it again but with a different color scheme. She got all of the Fluer De Lis sections cut and ground during the first class and only has 8 pieces of background to cut before she gets to the borders. She'll be making her borders square rather than using the leaf-like border that you see in the pattern. This may not make much sense now but it will be much easier to see next week when her background is completed and then tacked in place. 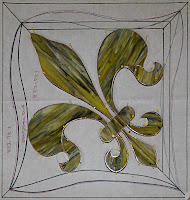 There's not much left for Patty to do on her window either. She finished grinding it during class this week and then got all of it wrapped and ready for solder. Patty has decided to forgo a border on this window and I think that it will look just great without one. The other option would be to go with a double border (because a single border would look too plain) but that might actually take the focus away from the center of the window. It's always tough to know what to do when you have a project that looks this good already. :-)

Julie began cutting glass on her first of two Iris windows. She's looking to make a colorful window but not one that screams 'LOOK AT ME!' I think she's doing just fine. She's questioning 3 particular pieces of glass that she's cut and will decide if she should change them next week when she comes in to begin cutting her leaves and background. I have to give her credit for considering changing anything that she's cut. All too often students believe that once a piece is cut it's more or less set in stone. Sometimes you can't really tell what something will look like until it's cut out in in place. And if you don't like it I always recommend changing it. I've replaced MANY pieces in windows I've done over the years including the ones you'll see at the end of this post.

And yet once again Janice has moved along quickly and efficiently with her window. I suspect this one will be all tacked together next week and then she'll decide on whether she wants to solder the window here in class or at home. She's got another center piece all cut and ground for her second window so she has options on what she'll be doing when we see her again Wednesday night. 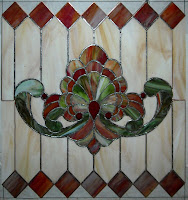 Lastly, here's a look at the Iris windows that we've been working on here in the shop. When each window was cut and ground it was put aside and then another would take its place on the back of the work table. A lot of students didn't realize there were actually 3 different windows so here's a look at all three of them installed in their new home out in New Orleans. Make sure you click on the picture to see all the detail. 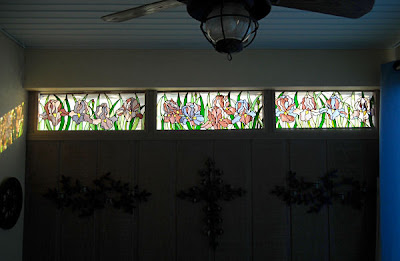 And that brings us to the end of our post this week. We'll return in another week with more on what's been happening in our classes.