We have a new student this week and a new student means that we get to see a butterfly. If you're new to this Blog you'll soon see that every student spends their first class making a stained glass butterfly. Yvette is our newest student and she'll be coming in during our morning classes. She made her butterfly out of various shades of blue and it came out perfectly. Yvette had no problem during any of the many steps it takes to get this sun catcher finished. She's decided that she likes doing this and that she'll be starting off with a big project. And I mean BIG! She'll start her Peacock window during her next class. Had she not shown a natural ability to do this I would never have let her start off with such a large undertaking, but I have a good feeling about her and her proficiency at this. 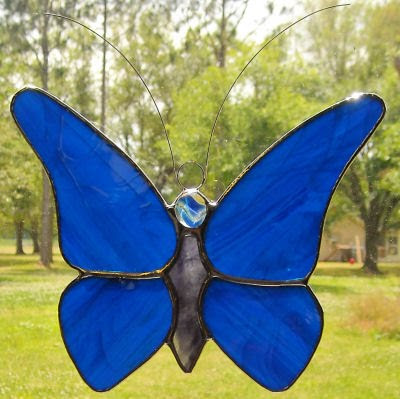 This is Knotty Margaret. She's a sock monkey and although I never cared much for monkeys I can live with this one because she's decidedly happy and not too terrifying at all. :-) Besides, Patty said that she was going to make this whether I liked it or not. lol She came in with the pattern almost completely drawn out and we only had to make a minor adjustment or two before she started cutting this out. This is what got accomplished on her first night of work. Not bad at all! 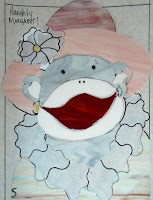 Roxie had begun grinding her window and this is how it looked when she took it home to wrap on Thursday night. Everything fits beautifully and there are only about 5 pieces that need attention. In a window this complex that is just a drop in the bucket. There's still the matter of a border to put on this but we won't tackle that until this is wrapped and tacked together.

Julie began working on her second Iris window a few weeks ago and she has all but the background cut out. I neglected to take pictures of this in it's semi-finished state because it's so tall and difficult to fit into the frame. That's one of the reasons we're only seeing a section of it this week. Next she'll work on her clear Rough Rolled background glass and then she'll be spending some quality time at the grinder!

Janice began to cut out her second to last window. We're out of the Red/Green glass so she wasn't able to cut out both windows at once like she normally does. She was able to doubled up on everything but the Red/Green so the missing glass shouldn't really put her far behind at all. By the time this window is ready to go home we'll have the glass and Janice will be moving right along again. Next she'll cut the red pieces and then make sure it all fits before she starts wrapping. 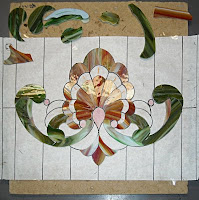 When Cheryl came in last week to repair her Camper Window she just fell right back into place with Janice and Grace. She ended up deciding to return to class and picked out a pattern which involves a Turtle and a tropical fish to do for her bathroom. It will be a companion piece to the Tropical Fish window she did about a year or so ago. She had liked the look of Steve's turtle so I just re-adjusted the size and then added Louis' tropical fish under it . We tend to mix and match a lot here and it always works out nicely. This week Cheryl worked on her turtle, next week she'll tackle the many odd shaped pieces that make up the turtles fins. 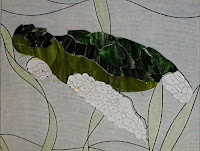 Lastly, Grace got the LSU script section of her box cut ground and tacked. The background has been picked out and I suspect we'll see this box completed soon. The biggest problem is deciding what glass to use for the trim of the top.

That wraps things up for this week. We're quickly getting caught up now as there are only 2 posts left to go to bring us up to date.