The Night The Lights Went Out

We only had one night of classes this week due to a power outage during a storm that knocked out the power Tuesday Night just as Janice and Grace arrived. Cheryl showed up a few minutes later and by 6:45 we decided that at this point the power was going to return too late to really get anything accomplished. An hour later we had lights. Oh well, at least we had some fun catching up on what's going on with each other. It's not just about learning stained glass-- it's about keeping up with friends as well!

Roxie was in the following evening and since she had electricity at her disposal she was able to finish soldering the last half of the back side of her window. I did some minor touch-ups for her (she's very good at soldering!) and then we washed her window, colored it and took this picture. It's finished and it looks GREAT! I think Roxie should be really proud of herself. 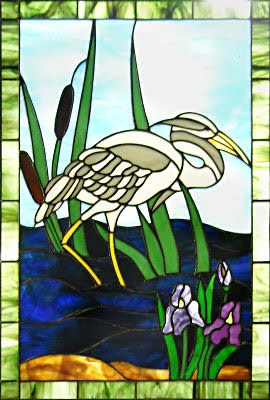 Julie finished grinding her Iris window and has begun wrapping glass. She has about half of it foiled so it's moving along nicely. If it weren't so thin we'd get a better look at it here in the thumbnail. Make sure you click on it to get a closer view of Julie's great work.

Patty is moving right along and her sock monkey is just about completed. There's no doubt that this one will be headed home next week. I love the colorful colors she picked, especially the border. 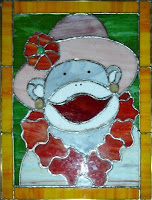 And Suzie traced out her pattern and began cutting the glass for her first real project. I guess it's easy to see that it's a Fleur De Lis. She's going to have to grind out the insides of the bottom left and right curves since they are so small and tight. You can only cut so much glass before you need some help with the grinder. You'll see what I mean when you compare this picture to the one that's posted in our next update. Suzie's getting very comfortable with the glass cutter and her work shows it. 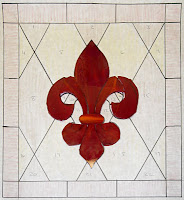 With a little luck we'll have power next week and more to show. I just got work that Yvette has broken her ankle so that's going to slow things down on her Peacock Window, but it will be right here waiting for her when she's able to come back to class. We all hope that ankle gets better soon, Yvette!