Not one, not two, but THREE butterflies this week. The classes are pretty well filled up now so if we get any more students we'll have to add another night. This week we had a small break as a lot of our students were out on vacation which always works well when we have a new student starting.

First off we'll take a look at Monique's baby blue Butterfly with a deep blue body. She decided not to change the color of her solder so hers is a nice bright silver. Monique got the hang of all the steps very quickly so I'm expecting her to have no problem at all. 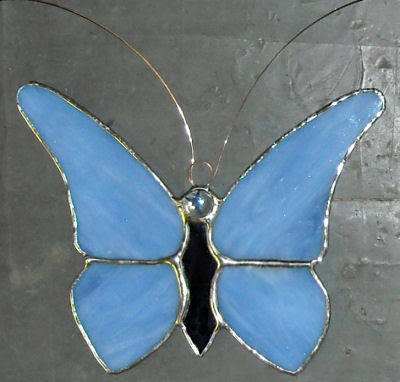 Bonnie came in with Monique (there's safety in numbers) and made this orange winged butterfly with a bright yellow body. And just like Monique, Bonnie showed complete confidence during every step of the way in making this Butterfly. 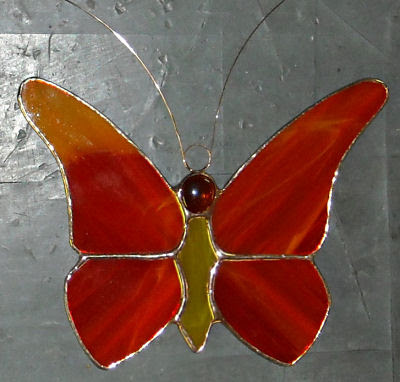 Our last butterfly (this week) was made by Shira. Rather than going with simple colors Shira chose a pink/tan/green mix for the wings and then complimented it with a multi-green body. Going with a copper coloring for the lead was a no-brainer and it came out perfectly. Shira came in with her first project picked so she's certainly excited about doing this. And I don't think she'll have a problem starting her Fluer De Lis window next week. 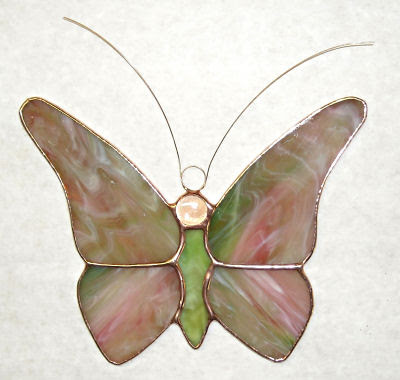 Patty finished up her 3 Fleur De Lis suncatchers and decided that a 4th was in order. After all, why settle for 3 when you can have 4??? So before she left she had a fourth cut out and ground. We'll see that one in our next post. 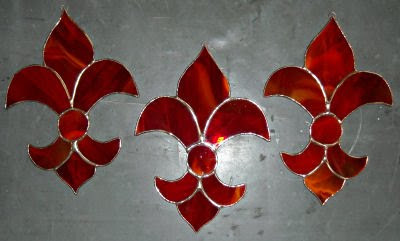 Roxie was working on the border this week as she tacked together all of her windows and then got all of the borders cut for each of them/ On of them is even wrapped already so next week she'll have them all assembled and then she'll begin soldering these.

Rita made full use of her class time and not only finished cutting her water and sky-- she also ground everything and didn't leave until she finished wrapping her last piece of glass. She'll tack it and add a border next week before she begins soldering this cute frog window. 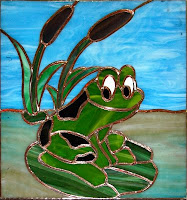 This window looks like it's about finished but in reality Cheryl only cut all of the water-- she didn't get a chance to grind it to fit yet. But that's only because she's dealing with some large pieces here. And she took her time cutting these so (as you can see) it almost fits together perfectly as is. It won't take much to grind the last part of this window. Then she'll need to decide on a color for her border...

When it rains it pours and that's exactly what has been happening here. Once again inclement weather has fouled up my internet and stopped me from posting this in a timely manor. But it looks like the rain is behind us now so although I'm still behind one week, look for a second post to bring us up to date tomorrow.