Rita has completed her Frog window. Four weeks in the making, this demure window is only 12 inches by 12 inches. That means that the pieces are rather tiny and very hard to work with but Rita pulled it all off and knocked out her first stained glass window. This one has a lot of character and I know Rita had fun making it because she's now got a grinder at home and plans to do things in her new home workshop. 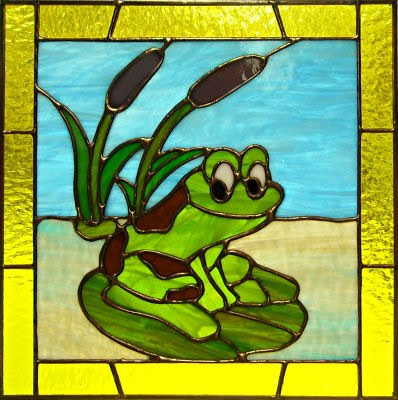 Suzie got her inner border completed and then set upon cutting the final border for her latest Fleur De Lis Window. She wrapped it, tacked it and then even got the first side soldered which means that she'll be taking this one home next week without a doubt. Look here for a completed picture in our next update! 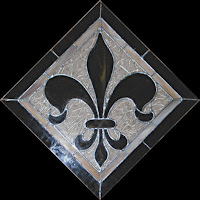 Bonnie REALLY made some progress this week. Not only did she finish cutting out all of her white glass but she also began grinding her window! She's probably got 30% of it ground already which is no easy task considering this is her first window. She took her time and cut off her marker lines on the glass and that means that the time she spends on the grinder will be minimal. It always pays to cut off your black lines! 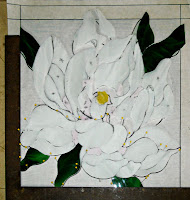 And Monique not only finished cutting her glass but she also has it completely ground as well! Before she called it a day she had a quick wrapping lesson and took all her pieces home with her. All that's left to cut on this window are her border pieces and the background sections of the pebbles at the bottom of her window which will easily be handled next week.

Roxie got all of the brass channel attached to her 6 windows and got them all soldered during her last class. When she left all that she had to do to complete these was to put some solder on the outside edge of the brass channel and attach the hooks to hang these by. Then it's just a matter of washing them and coloring the lead. Expect to see this set completed next week! 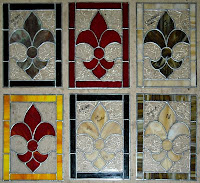 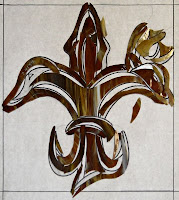 And rounding things out this week we get to take a look at Cheryl's Turtle scene. It's all ground, wrapped and tacked together now. And I only broke one piece when I carried it out to her car for her. YIKES! Now she's worried about about carting it back and forth but I promised I'd fix it when it comes back to get it's border tacked on. She's not sure what color that will be she'll cross that bridge when she comes to it.

So that about brings us up to date here in our Blog. If this rain doesn't let up so I can get the grass cut no one is going to be able to make it into the shop for our next set of classes! See you all next week...