Satellite Internet. Bah, humbug! It's our only choice here in the bayou unless we want to go back to dial up and live like we did back in the 90's. The problem with our current ISP is that if the wind blows or there's a cloud in the sky, or even perhaps a squirrel in a nearby tree we lose our connection. And with all the rain we've been having during the past week I've been lucky to even be able to check our mail. So, without further ado (it may cloud up again while I'm typing this) I bring you last weeks blog update.

You may remember Grace's Fleur De Lis window from last week but now that she's completed it we can get a good look at it with back lighting since we can lift it off the table. This puts another Fleur De Lis under her belt and she seems to be eying up yet another one for her next project. 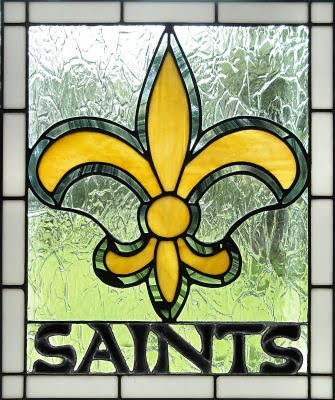 Next up we get a look at Julies second Iris window which is now completed. She went with different color Iris' throughout both windows but she kept the colors similar so it all blends together nicely. Very nice work indeed along with an eye for color.

And I've taken the liberty of photoshopping the 2 pictures of her Iris windows together and setting them in a door frame so you can see something that approximates the effect that Julie will be having in her door at home. Sadly, I took this second picture with some back lighting behind it while the first picture was obviously taken while it was lying on the table so they don't quite match up as nicely as I'd hope they would but you still get the idea of what her door looks like anyway.

Suzie was so excited when she finished her first project last week that she decided to do another similar window. In just one class she's managed to cut out her new Fleur De Lis, grind it and then wrap it as well. You can't say that she's been sleeping though her past 5 classes, that's for sure! Take a look at her new FDL window.

Roxie is hard at work on her 6 Fleur De Lis windows (although I only have 5 pictured here this week). She has all her FDL centers soldered and has 5 of her backgrounds cut and ground. Heck, she even has two of them wrapped already! The rest are going home with her and she'll tack everything together and get borders cut during out during her next class.

Rita has decided to make a cute little frog window and has moved along quite far on it during her first week of work. All she has left to cut out is the sky and the water which totals 10 pieces. I highly suspect that she'll be working at the grinder next week. (Actually, I can't lie-- I know it for a fact since the class has already happened!) 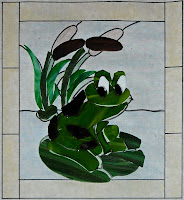 When Patty arrived she wasn't sure what she was going to do since she'd finished her frames last week. After looking around at patterns we had in the shop she decided to cut out 3 Fleur De Lis suncatchers which will be very practical gifts in the near future (Think Christmas!) She has each of them cut, ground and bagged so she can take them home to wrap. Expect to see these completed next week.

Michele continued working away at the centerpiece of her traditional styled stained glass window. In fact, she has the cebter design all cut out now and is ready to begin grinding it when she returns in 2 weeks. I love the colors in this window and think it's really going to be an eye catcher. 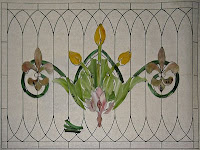 Lisa came in and ground her second Fleur De Lis and then wrapped both of them in foil and tacked them together. By the time the night was over she got the background cut for one of her windows and even has it wrapped. She really moving along quickly here, and she'll certainly have the second background cut when she returns in two weeks. 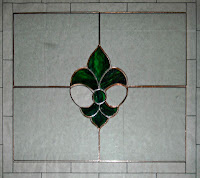 Janice is soldering her 2nd to last window which means that the end is near! I'm going to have to get on the ball and draw up the jumping frog pattern that she wants to make next because she'll be needing it soon enough! She has only a few pieces left to cut on her last window and then there's just the background to go. I can't wait until she can put these behind her and work on new projects. 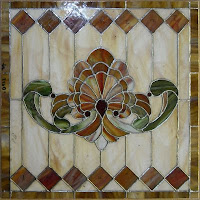 And here at the very end of the blog we have a look at Cheryl's undersea window. This week we saw her cut and grind her fish which means that all she needs to do is cut out the water and a border and she'll be basically done with this window. It's a big piece so it might take 2 weeks to solder but I suspect this will be hanging in her home soon enough.

Well, it looks like the weather has held out long enough for me to finish this. Now I can start working on the pictures from this weeks classes and hopefully get them uploaded tomorrow. But then again, with the weather the way it's been I'm not making any promises!