Well, here's a look at Graces completed Wedding Plaque. She purchased a heavy, black metal easel to display the stained glass that she's made and it does so very securely. The end result was even better than she anticipated because she hadn't even noticed the intertwined hearts on the top of the invitation which match the hearts in the lower stained glass panel. When it came time to decide if she should color the lead black or copper she decided to leave it silver to match the text and trim of the invitation. All in all it's another job very well done. 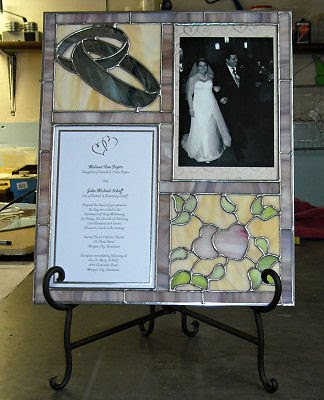 Meanwhile Patty was hard at work this week making herself another beveled box. She made this in one class so I'd say she's really hit her stride with these. She's using striking pieces of colored glass for the tops of these boxes which really set them off. Here's a look at the box both closed and with the lid slightly ajar.

And this week we get to see that Myrt has finished her Bumble Bee window. Like Anita, Myrt has decided to help Ceil out by completing a window for her classroom. Myrt really did 99% this window on her own so I think it's safe to say that she's got the stained glass thing down pat now. And you've gotta love that bee! 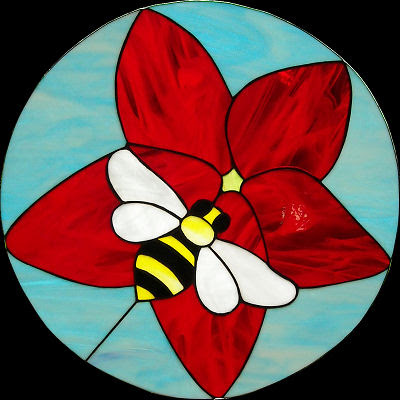 The final completed project this week was a pair of beveled boxes by Roxie. Like Patty, Roxie did all the work by herself using me only as a sounding board to be sure that what she was going to do next was the correct step. As you can tell from the picture below she did just fine. These boxes are always attention getters and once you know the secret to making them. But what really makes these particular boxes is the precision of the work that Roxie put forth in putting them together. Sure, anyone can make a box but not many people can make a box fit together so perfectly. 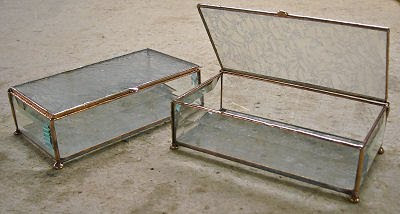 Sonia has decided to start making a Sunflower window complete with 2 birds. It's a nice size project with a fair number of pieces so this should be a project that teaches Sonia a lot. And I have to say that her flower petals are already fitting together nicely even before they've even been ground. 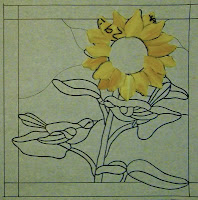 Janice is our reining Flower girl. For the past few weeks she's been working on flowers in sets of 3 and has been doing a great job assembling them. Wait until you see these windows once the backgrounds get cut-- they're going to be colorful, flowing and spectacular when they're installed. 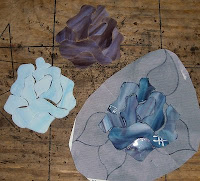 Here's a look at the replacement duck that Fran made this week. It's all ground and tacked together save for one piece that she plans to re-cut and have ready next week. Forgive the hole in this ducks back because it will be fixed the next time you see it.

And now we get to see what Terry has begun working on. It's actually 1 of a set of 3 but the other two won't be identical to this one. Terry is going with Bevels and clear glass for all three but this is the biggest and the most difficult of the 3. There's no doubt at all that it will be striking when it's finished. And the nice thing is that once the corners are put together the rest of this should move VERY quickly. That's the benefit of working with bevels.

We have another Blog post coming up tomorrow so be ready for another update Tuesday morning.