The Buzz This Week

Well, Roxie wanted to make something completely different and she did. I think this is the first Mobile that a student has made and who knows, it may not be the last. Those 3 bees were hard to keep still for the picture but as you can see we managed. I think Roxie had fun making this and I know we improved on the pattern that Vicki Payne provided for this project.

Sonia is all tacked together and ready for her final border. She's decided to use the same blue that she used to make the birds feathers with which will give the border something to tie into color-wise. I have a sneaking suspicion that we'll be seeing this window completed within the next 2 weeks. And like Roxie, Sonia seems to be having a fun time making this. 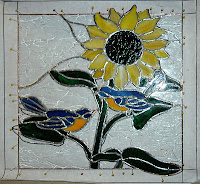 Terry has begun working on the first of her two companion windows to the large Beveled window she finished last week. These are much smaller but the centers have a lot more work in them. With the center piece to the first one cut out Terry is well on her way to completing this one.

Pam has begun to work on her first project. She was concerned about getting in over her head so she decided to start with something a small. After seeing her cut and grind this in one class I'm going to go on record and say that Pam has NOTHING to worry about. She's doing just fine. This humming Bird will be finished when she next shows up for class. 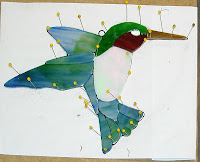 Janice really jumped out ahead of the class with her window this week. Not only did she cut out all of her background but she even has it all ground already! If you look at the enlarged photo of this you'll see 5 small holes where single leaves will be cut to fit. After those 5 pieces are cut Janice will be adding her border and then she'll solder this one. 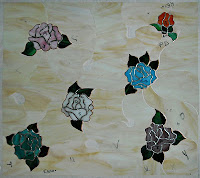 Myrt began working on the Fleur De Lis that Terry had drawn up and made a few weeks back. She altered the pattern a bit and then set out cutting the FDL in a nice dark Red glass. The only problem with the red glass is that it's hard to see your lines on it. But I know Myrt will manage. As you can see on the top part of the photo she's already got a number of the pieces cut out already.

Now would you look at this. When we last checked in on Cindy she had 6 pieces of glass cut and 3 square bevels picked out. This week she walked in the door with all 3 of her windows cut, ground and wrapped. By the time she left class she had 2 of the windows completely soldered and the front of the third window completed. Talk about moving along! 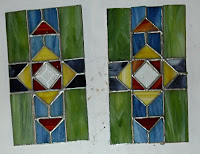 Bonnie has her ballerina slippers all ground and tacked together. She has the background glass for the oval section picked out and will have that part completed next week as well as her four corners that will turn this from an oval into a rectangular window. This window is very near completion and Bonnie is doing a wonderful job with it.

That pretty much sums up what happened during the last week of May except for the fact that I forgot to show you what Roxie did after her Bee Hive was completed. She began working on this Pittsburgh Steelers emblem. It's a quick little suncatcher that only needs 7 more pieces cut before she calls this finished. 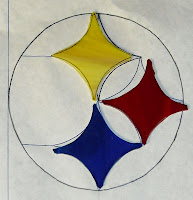 I'll leave you all with these words of wisdom: If you don't have any blood on your project you're being too careful!