Ducks On The Water

Ducks on the water,
and flying in the sky!

Fran's Duck window is finished and it's been quite a trip getting here. We've seen different ducks and backgrounds and patterns and colors but in the end it turned out looking beautiful. And she's even sold it already. Now sit back and take a gander at this. 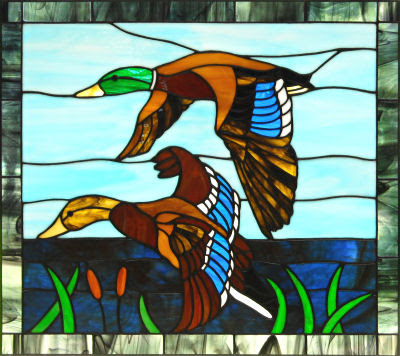 Meanwhile, Bonnie has begun work on her latest project. This will be a a pair of ballerina slippers and you can already see that they've begun to take shape with just one night of work done on them. The ribbons and slippers are almost completely cut already. Bonnie is a natural at this!

Ok, this Boars Head window is REALLY looking good. When Cindy said she wanted to add leaves to the background I thought it would be a look good but that it would also add a lot more work for a first time window. But now that they're almost completely cut out and ground into place I have to say that Cindy has handled herself wonderfully on a complex first project.

With the front of her window soldered and the back almost completed I'd say that we'll see Anita's latest piece of stained glass finished next week. For some odd reason I took a picture of the completed front rather than the 75% completed back side. Trust me when I say that this project is just about ready to make it's debut in a window next week. 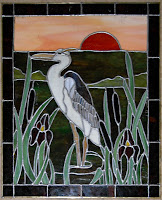 And Sonia is moving right along as well. She's also got a fairly complex window for a first project and she's really doing a great job. Her flower is ground and wrapped and the only thing left to grind before she cuts her background is the bird on the left and the leaf that it is resting on. 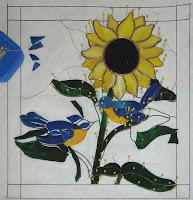 Patty's ear of corn is ground and wrapped which means that she's managed to keep it all together (both herself and her project) which can be VERY difficult with tiny pieces like this. I'm telling you, this window is starting to take shape and it's going to be a show stopper. Mark my words.

Myrt came in and finished wrapping her pieces. Once that was done she tacked it all together and then she cut her border out of the same orange glass that appears briefly in her butterfly. I always recommend that the border be a color that has already been used in the window-- preferably something that was used minimally as an accent color and which doesn't actually touch the border itself. These orange border pieces have all been ground and Myrt will be taking them home to wrap. 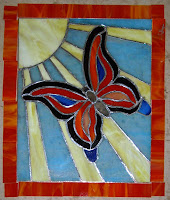 Janice has been cutting out flowers left and right and this week she's cut all of the leaves that surround them. She has 15 flowers and the leaves for half of them have been ground to fit. It won't be long before these will be tacked together and traced out over her background glass. 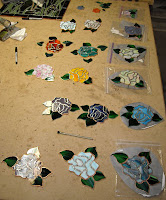 And here we take a look at Terry's beveled window. It's all ready for solder now-- even the zinc channel has been attached. It's a beautiful design and I can't wait to see this completed. Talk about impressive...

And there you have it.