A Bird in ballerina slippers walks into a bar and orders a sot of whiskey. The bartender looks up at him and asks, "Hey, what's with the long face?"

Wait a minute, that was supposed to be a HORSE in ballerina slippers. Or maybe it was just a horse-- I'm not really good with jokes. But I do know that Bonnie's Ballerina Slippers Window went home with her this week and they looked GREAT! The Pink Baroque glass that she used added a lot to the look of this window and her workmanship was nothing short of perfect. 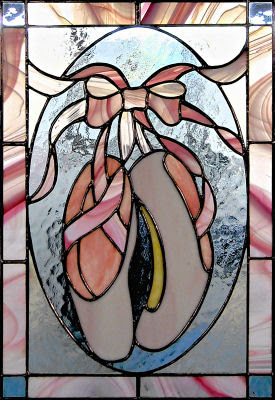 And on the same night we got to see Sonia complete her Sunflower window as well. You couldn't find the change that we made to the pattern if your life depended on it (unless, of course, you read about it last week). It just goes to prove that you can alter your pattern on the fly and still have a window that comes out perfect. Great job, Sonia! 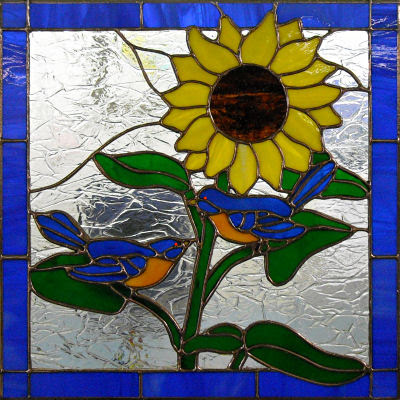 Roxie is going to make a 5 foot by 6 foot window made of nothing but tiny little butterflies. Each butterfly is less than 3 inches tall and made up of 22 pieces of glass. Mathematically that comes out to 480 butterflies in 1 large window! The butterfly wings that she cut out this week are much larger than the ones she'll be cutting for her 5x6 window but she's hoping that she can add more pieces to each wing. I say we up the ante to at least 30 pieces for each butterfly. What do you think?

I hope that no one really believed all that stuff in that last paragraph because Roxie is NOT doing a 5' x 6' window filled with insanely small butterflies. Instead she's making 3 fairies and this is the first of 3 sets of wings that she'll attach to the pewter fairie bodies once they're soldered together. 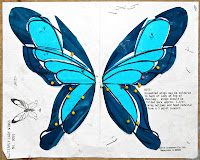 And moving on over to this table we get a gander at Janice's Rose Window. It was hard to see what was going on with it last week since it wasn't wrapped and the background still had some uncut sections but this week it's all perfectly clear to see. The border doesn't go across the top of the window because there's a smaller section that will sit above this. The smaller window will have a border on the top , left and right sides but not the bottom. When the windows are installed the scene will run together and even though it will be made up of 2 windows the border will allow the viewer to look at it as one complete scene. Pretty tricky, huh? 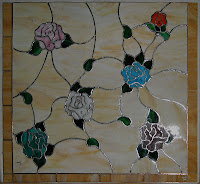 A boar walks into a bar with a horse and a ballerina and orders Whiskey Sours for each of them. The bartender looks at them and asks, "Is this some kind of a joke?"

Well here we are with Cindy's Boar window and it's just about complete. The front side is soldered and the back side will be done when it comes back in next week. I think it's safe to say that this is not only going to be finished next week but that it's the prettiest looking Boar I've ever seen!

Anita is working on her Peacock window and it's moving right along. With only the background and the borders left to go this will be nearing completion pretty quickly. Normally the border is a quick simple process but Anita is going with 3 borders that are very fancy. It will add time to the window but the end result will be worth it. Mary Lynn and Jane have both done these staggered borders in some of their work.

Terry has just the 4 corners left to go before she starts soldering this clear glass beveled window. And when it's finished she'll be starting up another one of the same design. But the second one should go a little faster for her -- it almost always does. Terry says she wants to do something with some color in it next.

And that will do it for this week. Oh, and did you hear the one about the blind carpenter who picked up a hammer and saw?