Roxie's Faeries came out perfectly! I said I had high hopes for the clear one and it turned out to be everything we all thought it would be. The silver lead lines against the clear wings along with the shiny silver Faerie body just sparkles away in the light. Of course, her green Faerie is nothing less than stunning as well! But the best part about these two pieces is that the wings went onto the bodies almost perfectly from the start. (Getting them to be symmetrical can be more than a little mind numbing at times...)

As you may already know it's National Stained Glass Safety Week. To help demonstrate the rights and wrongs of personal safety we have Naughty Margret's slow but lovable cousin Mickey-Mitchell showing us what he likes to do in his spare time. Do NOT try this at home kids. It's probably the reason why Mickey-Mitchell sits in his rocking chair in the corner drooling away the day. But HEY! Did you notice the nice frame that Mickey-Mitchell is in? Yep, Patty has completed her frame and I filled it with another one of her lovable sock monkeys just for this picture. Patty thought about putting a flower in one of the lower corners but she would have had to go with something bright to stand out against the black border and she wanted to make sure that the frame wouldn't clash with the room it would be going into so she opted out on the flower. Still, it's a wonderful frame and a good lesson on why Outlets and Paper Clips should never come together. 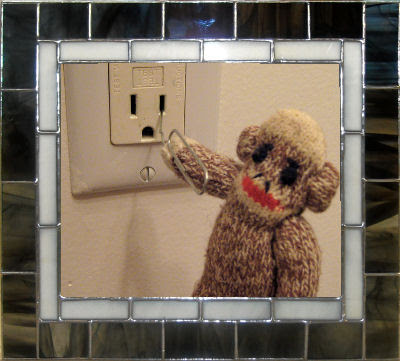 Cindy has completed her Leaves with Cat Tails Window in record time. Her choice of yellow for the border really made this window pop! The importance of a border color can't be stressed enough because most times it's the border that sets the tone for the window. Without this yellow border all of the colors would appear to blend in with one another giving the window a muted look. Now its anything but muted. Cindy is moving along wonderfully with her stained glass skills. 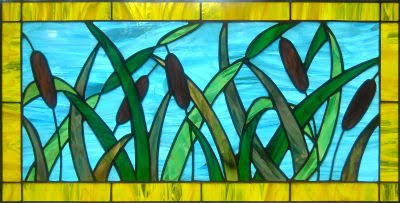 And as a quick "I Need a Present" project, Cindy threw together this stained glass butterfly. It was made from the same pattern that she made her first project from but this time around Cindy did ALL of the work herself and had it completed well before the end of class. Once she was done with this she began working on the pattern to her door which we'll see next week.

Susan is one of our 3 new students that started this week. She made her butterfly in Amber and Brown. From the minute she held her glass cutter she had a good understanding of what was going on. She'll be working on a Fleur De Lis Window next and I know it's going to turn out nicely. Here's here Butterfly.

Peewee came in and had the standard lesson on cutting glass. From there he moved over to his Butterfly pattern and made it all look easy. He took to the grinder perfectly so I'm sure that his first window will fit together just fine. I always know when someone is seeing the big picture when they worry about symmetry. Peewee will also be making a stained glass Fleur De Lis window but a different pattern than the one Susan will be working on. And this is the Butterfly that Peewee took home.

Dianne is the third of out new students and she ended up having no problem with her butterfly either. Its always nice to see the first project go together so smoothly. Over the years I've tried 3 different Patterns to start students with and I have to say that the Butterfly is by far the best one. 99% of the students feel comfortable with their cutting when it's completed and Dianne was no exception. She'll be working on a nice colorful Rooster Window when she comes back for her next class. Meanwhile, let's take a look at her Butterfly.

I have to admit that I was thinking that Myrt's grapes looked a little plain but I've done them the same way in the past so I assumed it was because there weren't any leaves on the top of them yet. Now that the leaves have been tacked in place I can honestly say that her window has really come to life. The rest of this is just filling in background pieces and adding a border so it should go pretty quickly from here. 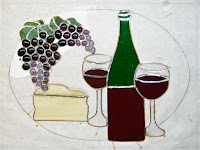 Terry now has the first of her 2 smaller clear beveled windows completely soldered. All this needs is a quick soak in the black patina to change the color of the lead from silver to black and this will be finished. Her second window is a good 90% soldered now also so that means we'll be seeing these windows completed next week. It also means that Terry is about to get some color into her life! 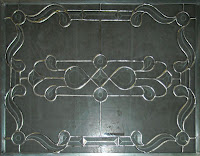 Sonia decided to do the smaller Peacock window that Anita had just completed. The larger Peacocks are certainly pretty but there are so many pieces in them that you can't practically re-size them to be smaller. And as we all know, you shouldn't make a piece of stained glass bigger than the window you plan on putting it in. The paper pattern is cut out and the glass she's going to use has all been selected. Sonia is now ready to start cutting glass.

And I'm going to end this by telling you that Fran started her new Duck window by making adjustments to her pattern ( changing the sex of one of the ducks) and then tracing it out, cutting up the pattern and tracing pieces onto the glass. I only now realized that I didn't get a picture of what she did. I promise to do better the next time we see Fran.