Welcome back! This post will bring us up to date (at least until Thursday night rolls around when I'll have a new weeks worth of progress to report on).

This week we're going to start off with Bonnie P. who has completed her 2 Flower Boxes just as I suspected she would. The bottoms are only made up of 5 pieces of glass but figuring out how to cut them and assemble them is the tricky part. You have to admit that these turned out really nice. Maybe if I'm nice to her she'll make one for me... :-)

Alright, now this is a first. Patty is the first student EVER to make a completed project that required no glass cutting. I know what you're thinking: Bevels. But you'd be wrong. See, Patty had this leftover wooden frame and decided that if she could make a framework that popped inthe back side with 2 bars going across she would have a nice place to hang her ear rings. And this is what she came up with. She even had a small metal flower to hot glue in the corner to give the frame a little more POP! 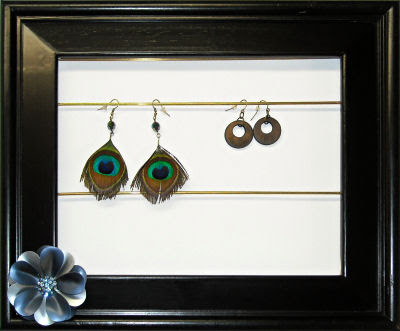 And now we take a final look at Terry's 2 small Clear Beveled Windows. Yes, it's a pain working with clear glass but in the end you can't help but admire the results. The two window are identical so don't knock yourself out trying to determine where the difference lies. There's just something about clear glass and bevels that's really elegant. 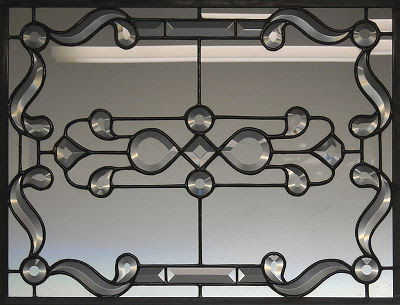 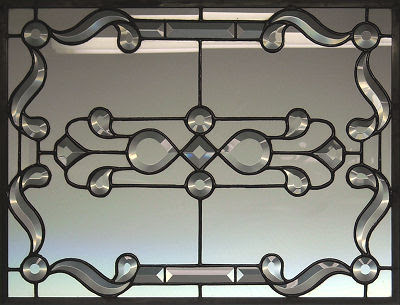 Terry didn't want to waste any time getting on to her next project so she started working on this at home. Whoa! Look at all those pins! I LOVE IT! When this is wrapped and tacked there will be no doubt as to how it will fit together. Terry drew this up herself and is doing a great job with it. 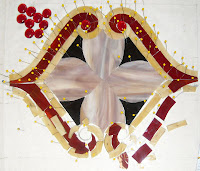 Dianne went all out and decided to make a Rooster Window for her first project. I wanted to see her get the Rooster all cut before class ended but she also got the green hills in the background cut out as well! She has only 2 colors in the sky left to go so I think she'll begin grinding this next week. Talk about moving quickly!

Sonia picked a beautiful iridized blue glass for the neck of her bird. she's also using it as the rounded sections of the feathers that fill the bottom of her window. I really like the choice. She has a lot of other pieces traced out onto glass just waiting to be cut during her next class. 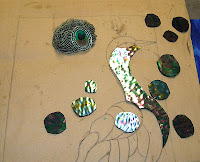 Peewee is making a long Fleur De Lis window that will be accented with 2 small bevels. With the center Fleur De Lis all cut, ground, foiled, and tacked together Peewee will begin his next class cutting and grinding his background. He's moving quickly and doing wonderfully.

Cindy has begun working on her front door. It's a standard size door sectioned off into 9 panels that looks something like this:

Well, what you see below are the top and bottom rows all cut, ground, and wrapped. She'll be working on the middle sections next so we'll start to see this taking shape soon now.

Susan decided that she wanted to make a Fleur De Lis window also. She liked the one we had in the shop but it's orientation was wrong. She wanted something wider than taller. In the end she settled on this pattern and like Peewee, she managed to get her center Fleur De Lis cut, ground, foiled and tacked together. Once her background is cut during her next class she'll be down to borders which will be simple on the strip cutter.

Anita, never one to be sitting down relaxing, has more than put a dent in her second Egret window. By the time she left class it was all set and ready for solder except for 1 small piece that needs to be dropped into place. See, as she was foiling she discovered a large chip on the bottom of her water. She hadn't bothered to bring that glass into class with her since she thought she was finished with it, so what she did was cut a large section of the chip away. I hoped to fill it with th e other blue she had used in the water but as luck would have it we were out of that one as well. So in the end she will simply drop another piece of the water glass into the opening and no one will ever know that she deviated from the pattern. Stained glass is all about making changes on the fly.

Roxie is branching out a bit. A few months ago she made a window with the numbers for her house and now she's making a sign for the Yellow Camp! Whoever took the picture should have straightened out the last 2 letters, huh? And can you guess what color the letters are going to be? Chartreuse? Feldgrau? Malachite? Burnt Umber? Fallo? Gamboge? Perhaps she's decided on Jonquil? Nope-- she's going with boring old Yellow. As it SHOULD be! We'll see some color in this next week for sure.

And that about sums it all up for this, the 3rd week of July. But we'll be back again soon-- you can bank on that.