Bonnie's Rooster Window is complete! She really moved quickly on this and her soldering is getting nothing but better and better. Soldering has always been the toughest part to teach but Bonnie is really picking up on it now-- I barely had to touch this with the soldering iron to get it looking picture perfect. 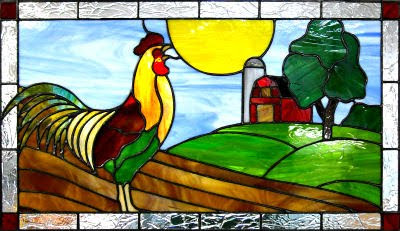 Here we have a look at Janice's 2nd window all completed and ready to install. The third and last one is almost finished as well so we'll be seeing this theme again shortly. Next up Janice will start cutting the flowers and leaves for 3 windows that are the same width but only about half the height of this one. 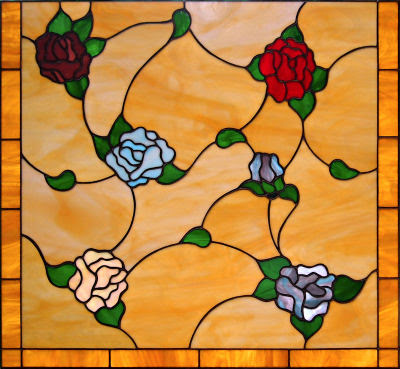 Roosters seem to be a popular idea here in class. Diane's Rooster is the second window this week done in this theme. Although the patterns are similar you can see they are 2 very different interpretations. This particular pattern was done a few years back when Kim was taking classes but I'd be hard pressed to pick which Rooster Window is my favorite.

Terry has all 3 sections of her windows completed now and has already moved on to other projects (as you will soon see). Although this window is somewhat small it certainly has enough pieces in it. And being that it's symmetrical Terry had to take her time to make sure every thing fit perfectly or you'd surely see the placement errors. All in all it's another job WELL done by Terry. 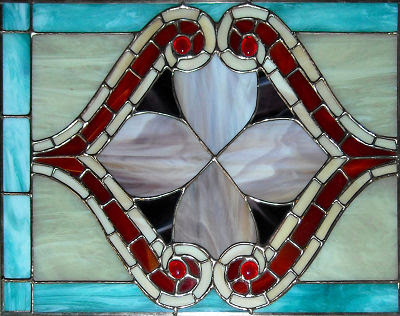 And speaking of work done by Terry here's a look at the completed first side of her Fish Window. All that she has to do on this is solder the back side and give it a bath. This has always been one of my favorite patterns and I have yet to be able to turn up the spare time to make one for the shop. I'm glad to see Terry's turning out so well. 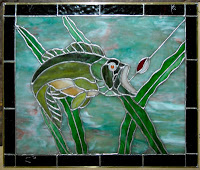 Oh, and don't think we're moving on just yet. Terry is also working on this Fleur De Lis Window as well. I'd ask her what she does during her down time but I don't think that she has any! You can see that the left side of her background glass is cut into a diamond pattern. The right side is also cut but it's been ground and fits together so perfectly you can barely tell it's been cut. That's a testament to the quality of work that Terry does. 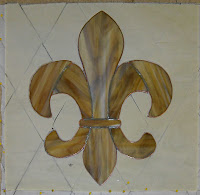 This is the Anita/Myrt Mallard Window and this week I know for certain that Myrt got to work on it first. I'd say that more than half of it was ground when Myrt left for the night. Tomorrow night Anita will swoop in and pick up where Myrt left off.

So, just as I was saying above, Anita came in and finished grinding the rest of her Mallard Window. One of the feathers was extremely transparent so she's leaving that out and replacing it when we have the glass here in the shop next week (she left it home thinking she was through with it for this project). There's also a missing piece of sky that we'll re-cut next week as well. Anita is taking this home and foiling all the remaining pieces there so I'm sure we'll be seeing solder on this when it returns. I just hope I remember to take my square off the board before she takes it home again! :-)

And once Anita finished up grinding her Mallard window she moved on to her Purple Callalily Window. It's hard to see the clear textured glass she picked for her background but it's all cut and ground now. It sounds to me like Anita will be doing a lot of foiling at home this week.

Peewee's latest Fleur De Lis Window is moving right along. He's got the background almost completely cut, ground and foiled. The only snag was that we didn't have enoung of the background glass in stock to cut all of his pieces so the upper right and left sections are missing right now. The glass is scheduled to arrive tomorrow and that means that next week Peewee can tack together what he already has cut and then fill in the 2 missing pieces perfectly. Oh and that red thing on the upper right of his window is the FID that Peewee was using. Somehow I didn't see it lying there while I took the picture.

Susan's got her box top completed and I believe she took the sides for the box bottom home with her to wrap. That means that this box will certainly be finished for next week. You can see that all of the straight lines meet up with the angled lines perfectly which tells us that Susan took her time to make sure that everything fit well when she ground this piece. I can't wait to see this all together.

Cindy's front door panels are really shaping up now. With 7 panels completed and 2 left to go I'd say she'll easily make her deadline for getting these windows installed. Here's a look at the general layout. The bottom of the door would be the left side of the picture.

And these are the 2 remaining pieces of Cindy's door. As you can see she has the bottom one completely ground and the top one is well on its way.

And while Cindy is home and unable to work on her doors she's been making mirrors to give as gifts. Here's a look at one of the hand mirrors that she's started. The mirror has to be dropped in place in the center and a few of the flower petals still need to be cut but you can clearly see what these will look like when completed.

Fran's newest window was hard to get a picture of this week. It's a Donkey complete with background scenery-- and a very large one at that. Only a few of the donkey pieces have been cut out but the rest have been traced out onto the glass so I'm confident that this will be much easier to view when she return with it next week.

Grace has really been knocking out pieces while she's been in class. You can see that her latest Medical Window is moving along nicely. She's been grinding this from the inside out as she's been working on it so it's actually a lot further along than you might think. There's really only the large red pieces and the borders left to grind on this window. 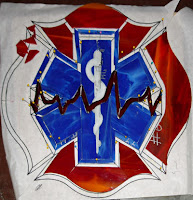 Lastly we'll look at Myrt's second project-- her Fleur De Lis Window. With the front completely soldered and the back almost completed it's safe to assume that this project will be headed out the door and to her house shortly. The background was cut from one piece of glass with no spaces between the pieces so all of the grain matches together perfectly. Well, that's a bit of a lie. There were 2 pieces that she had to cut through to get it to work but they were small and she was able to find 2 pieces that look exactly as if they belonged there. In fact, I defy anyone to tell me which pieces were replaced! 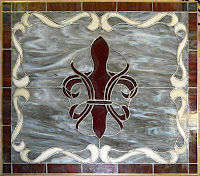 And that wraps up another edition of the Blog. All that you read here today happened during the classes that occurred on September 20th, 21st, and the 23rd. Up in our next post will be the first week of October!