Why Are My Pieces In The Garbage?

We are officially 6 weeks behind and this post will drop the umber by one.  Of course, classes for this week are starting tonight so that will sort of negate this posting.  Still, this is my second post in as many days so I guess it's safe to say that we're on a roll here.

First off we have to look at a project that got skipped in the last update. Somehow (it couldn't have been my fault, could it?)  the picture got thrown into the wrong folder and I just realized that I have 2 projects this week for Susan.  This is her first box and it came out looking beautiful.  How could anyone complain about receiving this as a gift?

This week Susan has begun working on her second box.  This one is a geometric design and it's a little hard to see here since it's un-ground but this is a brown on brown box top made up of 35 pieces. there's a lot of work in this one and making sure it all lines up is essential to making the design work.  I have no doubt that Susan will be able to pull this one off.

We're going to start things off by looking at Anita's latest project.  She's jumping around a bit but that's the way it goes when you have many irons in the fire.  This is her Mallard Window and it's going to be made by both Anita and Myrt.  Both of them had a hand in getting it this far because some of the glass was cut by Anita and some by Myrt. 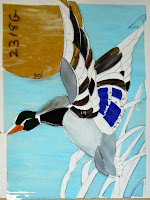 Meanwhile, Myrt was also working on her Stylized FDL window.  She had everything ground last week and while she was working on cutting duck feathers she was also wrapping and tacking this together.  You can see the glass she's chosen for her border on the bottom of the window.  That will be cut next week. 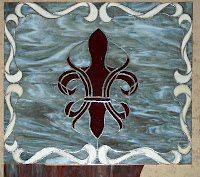 Bonnie's Window is just about ready to crow. The clear krinkle border is all cut and ground and the bottom row is even wrapped already.  The rest of the pieces have gone home with Bonnie so she can come in next class and get to work on soldering this window.  It looks great!

Patty has added some crawfish to her Seafood Medley Window.  I'm telling you-- this is going to be something else when it's completed.  I think that this window and Grace's New Orleans scene are the two most complex windows ever done in here.  All the tiny pieces can really get to you but Patty isn't letting that happen and is working at a steady pace on this.

Sonia's Peacock Window has found it's groove!  Now that it's all wrapped and tacked together she'll be cutting her background glass.  She picked a really nice sheet of textured clear that will make this bird SNAP! (as if the feathers already don't!)  Her colors are flawless and her work is precise to the point of her re-cutting a piece when the foil around all the glass shifted things a bit.  She could have left it go but she went for perfection instead.

And now we look at the second Rooster of the Blog.  Dianne's Rooster and Sun window is a more lighthearted scene than Bonnie's but it is not any less charming.  Dianne has come a long way already while making this first window and her soldering on this first side is really nice.  She'll flip it over next class and finish this window then.

Fran's Ducks are so close to being completed that it's not even funny.  After adding her border we knocked out 3 pieces of the sky so we could redo the lead lines.  I'll post a picture of both of them side by side so you can see how a simple line can change the entire flow of a window.  We would have replaced the glass in class but Fran left her sky glass at home where she'll fill in these 2 pieces during the week. 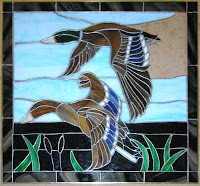 Wow, Terry came in with this Fish Window all cut and ground and managed to knock my socks off.  She's really been burning the midnight oil at home to get all of this work done-- I didn't even realize that she had started this!  And it fits together perfectly.  There's a little wiggle room between the pieces which means that when she foils her glass the window won't grow or possibly twist out of shape due to thickness of all the foil.  Great job Terry! 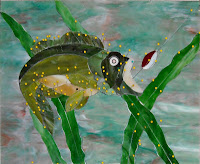 And that brings us to the end of this post.  I won't mention any names to help protect the guilty, but one BIG tip I can give anyone is that you should place your cut pieces on your pattern as you cut them.  This will help stop them from being swept into the trash with the scrap glass that accumulates along side your good pieces!

Posted by Bayou Salé GlassWorks at 10:39 AM