Things are really starting to pick up again in classes here.  We have a lot of completed windows and a lot of  projects that will be completed soon enough.  So let's take a look at just what's been on our cutting tables during this past week.

Terry has completed her latest Egret Window and like the others before it, it's a nothing short of a masterpiece.  It seems that Terry will pick a design and then end up making 4 or 5 similar renditions for other people before she moves along to her next subject matter.  That trait seems to be holding true with her Egrets/Herons as you will see later on.  :-) 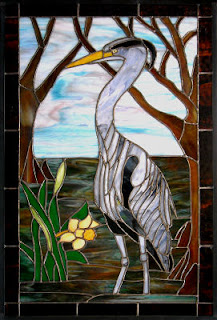 faer·ie  (fâr-ë)
n. pl. faer·ies
1. A tiny winged being in human form, depicted as clever, mischievous, and possessing magical powers.
2. Any of the (naked) women with wings that Roxie has made over the years here in stained glass class.

As you can see, Roxie has this pattern down to a science.  She'll be sticking with the colorful wing motif and will be making at least 2 more butterfly lawn ornaments during her next class. 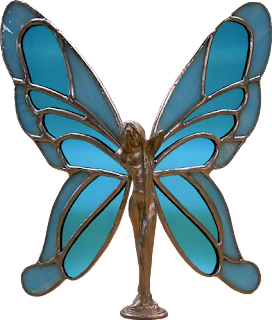 Myrt's Semi-Victorian Window has officially been completed.  Last week she left with only the second side to solder and that's exactly what she did when she came back in.  It's was a a bit different working on a full sized window after having abandoning it for a number of weeks to make about 10 mirrors and crosses.  I haven't a clue as to what Myrt will be doing next so I can't wait to see what she comes up with after she returns from her first retirement vacation.  Congratulations Myrt!

Susan's got her 3rd Flag completed and I believe that after this she plans on making some Pumpkins (on a stick).  In fact, as I type this out I distinctly remember her tracing out pattern pieces on Spectrum orange glass so when she returns I know we'll be seeing something that will decorate her yard for the Fall season.   I'll say this for her-- she's keeping on top of the holidays since her flags are finished and it isn't even the 4th of July yet! 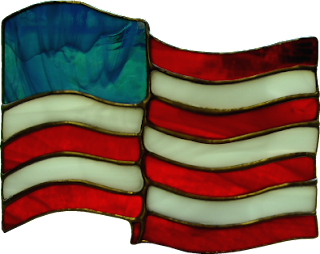 Remember what I was saying about Terry up above?  Well, have a look at Terry's next Egret Window.  She brought it into class for the first time this week and it's already almost 100% cut out!  Terry certainly loves making stained glass (and Egrets!)

What do you call a cow that only has 2 legs?  Lean Beef.  (groan) Cindy's working on the first cow window I've seen in about 20 years.  She's been cutting and re-cutting glass to make sure the colors work out just right because black and white cows are easy to pick out colors for whereas the brown ones are a lot more difficult.

Aubrey is making this beautiful Silhouette Window for her first stained glass project.  There will only be 4 colors of glass in it: Orange, Yellow, and 2 shades of black.  The blacks will blend into each other and won't be discernible when the window is on the table but trust me when I tell you that this window is going to really draw a lot of attention when it's hanging up.  I love the pattern and the colors already. 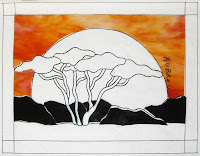 Meanwhile, Lynn is busy with her Flamingo Window.  This pattern is one of those perfect first projects because it isn't too easy and it's not too difficult.  There are a few cuts that are very challenging and then there are others that are almost a straight line.  And Lynn has picked enough colors  to make it stand out in a crowd of windows.  I can't wait to see more of this cut out so we can really get a feel for the pattern. 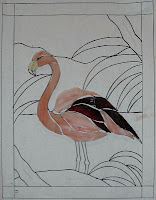 Ok, we might have to make this Blog R rated from here on out-- or at least until Patty finishes her Lady in Bathtub Window.  Just look at those long legs.  It's all cut out now save for the flower that will be coming out of the vase.  To make sure the stem of the flower is absolutely perfect she'll cut the stem lines into the wall after everything else is wrapped.  Patty's begun grinding this project so it's another one that's moving along quickly! 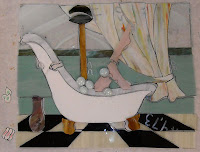 Sonia had her choice of 2 patterns to pick from when she came in this week.  She could either make her Charlie Brown Window or her Praying Hands Window.  Guess what she decided to do first.  The main reason for her choice was that she knew she could get these Praying Hands done quickly.  See, when you finish a project quickly you get on a roll and actually get psyched to tackle more elaborate patterns.  And her Charlie Brown Window is definitely the more elaborate of the 2.  That said, there's nothing wrong with this pattern at all and I suspect we'll see it finished soon.

We have just one more blog to go and we'll be 100% up to date again.  Look for the next post sometime late Sunday.