You Aren't Putting That In My Glass Rack

Ann's Flower Window is leaving the shop.  In other words, it's finished.  At first she was able to transport it back and forth from the shop to her house so that she could work on it at both places but once all the pieces were wrapped it was just too large to be moved in and out of the shop.  I completely understand why she didn't want to risk transporting it but now that it's completely soldered it's a nice and sturdy window.  And colorful too! All in all,  I believe that Ann had a fun time making this.  There were times that she was a little leery about how it would all come together but as you can see it did so very well.  Or I should say that Ann did very well. 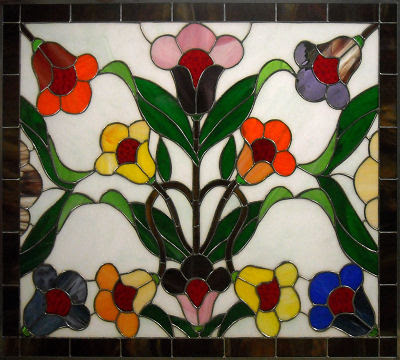 The Pokeno Girls are officially walkin' out the door.  Sonia's border glass was a chore to decide upon but I don't think she could have picked a more perfect color for the trim of this window.  It's colorful and vibrant yet it doesn't detract any attention from the subject of the window-- The girls.  As with all of Sonia's windows I have to say that this is a very nice window indeed. 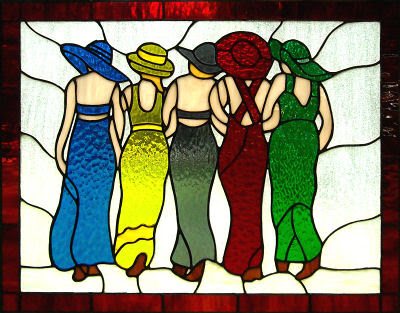 Susan's being very patriotic and has completed a second American flag Lawn Ornament.  She also managed to cut out and grind another while she was in class.  She's taken those pieces home with her to wrap and I expect to see her soldering it together when she returns next week.  That means that we'll be looking at the last of her Trilogy Of Red, White and Blue Lawn Ornaments in our next update. Long time readers of this Blog know that when we see one of these butterflies it means that we have someone new to introduce.  This pattern is our standard first project so we see a lot of these but the color choices make them all different and worth looking at.  This is Aubrey's Butterfly and as you can see, it turned out perfect.  It's really more of a blue hue to it but for some reason the camera is making it appear more gray than it really is. 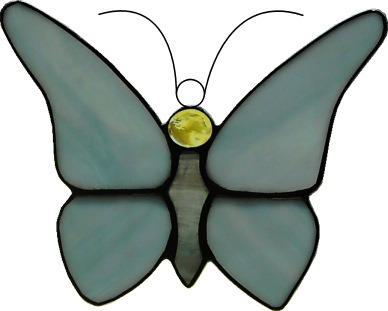 Lynn's Butterfly (yes, we have 2 new students this week)  uses a nice almost olive/green glass for the wings and a teal body.  As you can tell from both of these butterflies, both Lynn and Aubrey made sure that everything was symmetrical and that there were no sharp corners or ragged cuts in the long runs of the glass.  It's little things like these that make a project look professional. 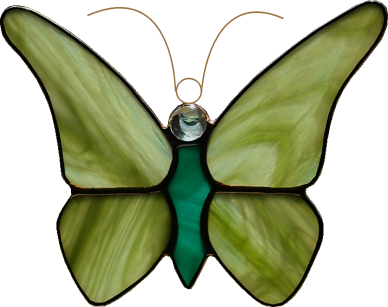 Roxie worked on her latest Stained Glass Faerie by grinding all of the pieces that she cut out last week.  Once it was all ground and fitting together she began wrapping her glass.  The pieces making up the wing on the right are all wrapped in copper foil, the wing on the left isn't (but will be soon).  Next week this little lady should be flying out the door. 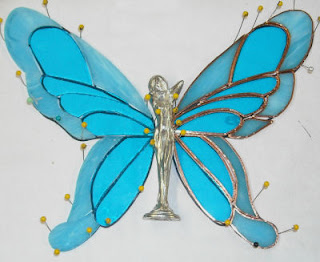 Terry has the front of her Egret all soldered and the back side has been started.   She's decided to go with a zinc channel to surround it and give it some added stability.  Brass channel will protect the edges of a window but it will still allow the window to flex and possibly break if it isn't handled carefully.  Zinc channel adds a lot strength and once this window is completely soldered it will be VERY sturdy. 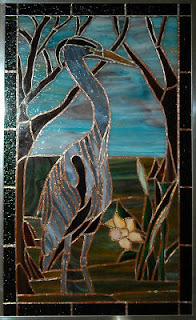 Myrt has finished her mirrors and crosses so she's back to work on her semi-Victorian Window.  This week she wrapped the final border, tacked it into place and then ran some brass channel along all four sides.  Then she started soldering.  Yes, they are her hands in the picture holding a roll of solder in one and a soldering iron in the other.  I don't get enough shots of projects actually being worked on so this one is a treat for me.  Myrt could be a hand model if she wanted to be one! :-)

Patty finished her Dragonfly Window last week and came in not sure of what she wanted to make next.  After a little thought she decided to do the Lady in A Bathtub window that Roxie made 2 Christmases ago.  It's something she's been talking about doing for a while now so it's a good choice no matter how you look at it.  She managed to get a lot of it cut out this week so I wouldn't be surprised if this isn't completed very quickly. 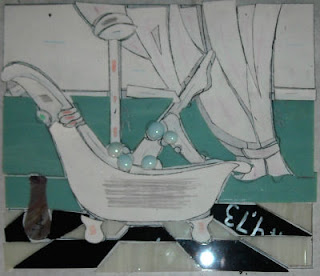 We're starting to fill up with new students so space is going to be getting tight in the shop again.  Expect to be seeing more butterfly suncatchers! 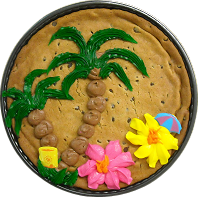