Terry finished her latest Fleur De Lis window and it's a winner.  Rather than going with a standard rectangular frame within a frame she opted for a scroll work styled inner border.  If you look carefully at the design of this window you'll see that the only straight cuts in it are on the outside edge.  That means that there isn't a straight lead line in the entire panel which helps to explain why it comes off as a very graceful and flowing window. 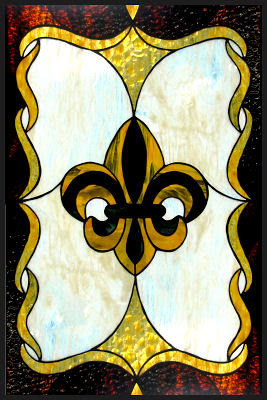 Bonnie got two of her 3D Lawn Ornament Butterflies completed and has the 3rd one so close to completion that it isn't even funny.  It just needs to be attached to the mounting pole and then washed so expect to see that featured next week.  Here's a look at her Orange Butterfly-- we'll see her second one a little further down in this post. 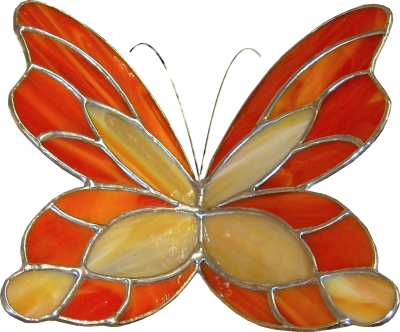 Bonnie isn't the only student to get two projects finished this week.  Cindy managed to get her Brown Cow Window completed and even inserted into the frame she made it for.   After we added a small brass channel to the edge of her panel we slowly slide it into the window frame that she brought along with her and it fit inside like hand in a glove.  I love when things work out perfectly like that.  The picture below is just of the window itself sans the white wooden frame. 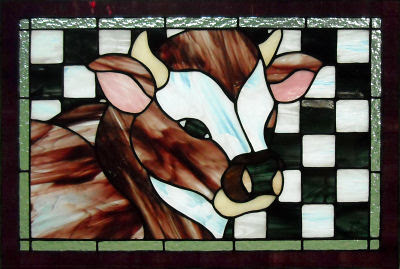 Cindy's second finished project was this fancy Fleur De Lis that I believe will be inserted into a small table top.   If you look closely you'll see that this is the same Fleur De Lis design that is in the center of Terry's window--  it's just been redrawn in a smaller size with a round background and then cut out of different colored glass. Cindy also began grinding her latest hand mirror and we're going to call it the Unicorn!  Err, no, that's wrong, it's the Zebra(!) hand mirror  We all all know that Cindy enjoys working with tiny pieces so this pattern (consisting of  38 pieces) is right up her alley.

Lynn came in and managed to get all of her Flamingo window ground and then a good 95% of it wrapped.  What she didn't finished wrapping went home with her so I know that when she comes back in she'll be ready to tack this together and then fill in 2 pieces missing pieces of background mountain.  And then it will need just a quick border and then a day of soldering to wrap up this project. 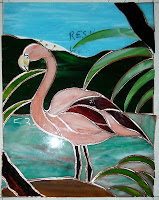 Meanwhile Lynn's daughter, Aubrey, put the finishing touches on her Sunset Window which some people are referring to as The Lion King Window.  Either one works for me.  Aubrey certainly selected the perfect set of colors for this project right down to her deep red border.  She'll be soldering this next week and with a little luck she may be able to take it home with her as well.   If you think it looks nice now just wait until you see it with some light behind it! 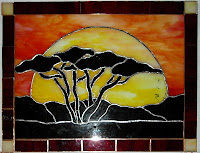 Patty was hard at work on her colorful Birds window this week.  She's beyond the halfway point now (in terms of cutting glass).  The best part about this window is the ability to use scraps that have been hanging around  for a while now.  She really can't lose when it comes to picking colors for this design since colorful is supposed to be what this is all about.  It's already shaping up to be a winner.

Shelley finished grinding all of the glass to her Mermaid window when she came in and then she set her sights on wrapping all of her pieces.  She didn't quite get them all foiled but she'll definitely get then finished and then tacked together when she comes back in next week.  Once it's tacked she'll add the final border and be ready to solder this project. 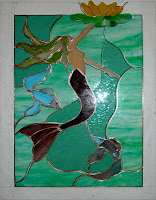 Okay, we're going to back track a bit and look at the second 3D Butterfly that Bonnie's completed this week.  I keep saying that it's 3D (meaning 3 dimensional) but it's hard to show in pictures.  Hopefully this semi rotating view of Bonnie's other butterfly helps you to see how the butterfly is 'folded' in between the left and right wings to form a very loose V shape and make the butterfly look more realistic than it would appear as a flat piece of glass.   Alas, my picture would be better if I had lowered the camera more so I promise another attempt when Roxie completes one of hers.

And speaking of Roxie, here's a look at 2 of the 3 Butterflies that she managed to grind this week.  I forgot to snap a picture of her red butterfly before she bagged it and put it in her purse to take home with her so it could be foiled when she returns for her next class.  I promise you'll see the completed version though!

And speaking of wrapping, we'll wrap up this post with a look at the Ballerina Window that Terry began working on after she completed her Fleur De Lis Window.  You can see that she's cut her pieces short on the bottom and that's because she will be adding a name to this window that I forgot to draw into the pattern.  It's a simple fix and she'll most likely have that part completed when she returns (knowing Terry). 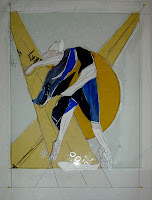 Wow, it was a busy week in classes and next week is shaping up to be more of the same.  No one is standing around wasting time, that's for sure.  I always love to see what our students will come up with next and I'm generally surprised just about every week.   I can't wait to see what next week brings us.