There's plenty to see here this week -- I think we're on a roll again when it comes to student projects.   Even the freshly started projects are moving along quickly which is nice because it means we always have something new to look at in our weekly updates.

So we'll start off with Aubrey's window.  It's certainly had many eyes on it over the 5 weeks it's been under construction.  Everyone was always asking to see how far along she'd gotten and everyone Oohed and Awed when the sun was cut and tacked into place.  It's just a shame that only a select few got to see it before she took it home with her this week.  As you can see, for a first project this is really the bomb.  (Do they still say that?)  Sadly, the picture doesn't doesn't do it justice. 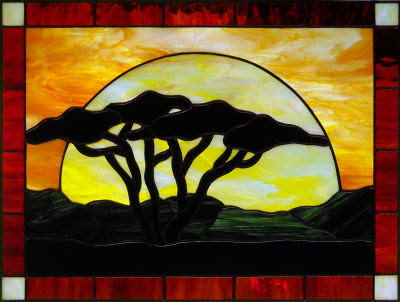 Cindy designed this Zebra mirror herself and it's a keeper!  A change will need to be made if she decides to make it again because there's one thing about stained glass we both forgot when she was working on this project:  Straight lines bend easily.   What does that have to do with this Zebra Mirror?  Well, the bottom 4 pieces wanted to pull off when Cindy finished it and picked it up.  But there was a simple solution to fix it-- we just ran a wire around the outside edge of the handle and hid it under the solder which means that now it's nice and sturdy.  But next time Cindy makes this she'll run the center line all the way down the handle and stop the two sides from lining up so perfectly so it will have strength without the use of wires.

What we have here is another look at the window that Cindy completed last week.  I didn't get a picture of it in the actual frame so  Cindy was kind enough to bring it back in so we could let you see the final completed project all installed.  And since I took this picture early on in the evening we have some actual light behind it which allows you to see that the outer glass border is a nice deep red. 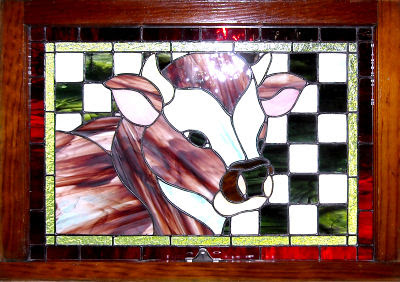 Roxie has been cutting and cutting for the past 3 weeks or so and now we're seeing the fruits of her labors.  This is the first of her five 3D Butterfly Lawn Ornaments.  These things seem to be extremely popular right now and they're about to start flying out the door now that Roxie is starting to solder hers all together.  I like her choice of colors on this one (and all the others.)  They're really vibrant. 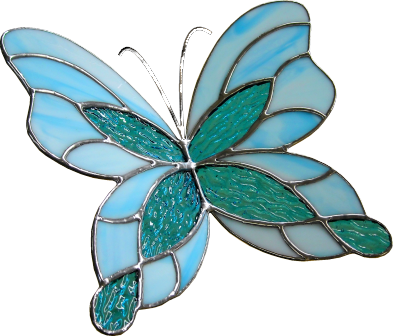 Speaking of Butterflies, last week I tried to show the angle of the wings on Bonnie's 3D Butterfly Lawn Ornaments but the picture didn't quite show it.  This is Bonnie's last Butterfly and I think I have the camera low enough so you can see the tilt of the wings.  You can also see the mounting post underneath  that will help anchor this butterfly into the ground.

Bonnie's next project is another 3D Lawn Ornament but this one won't be a butterfly.   As you can see from the picture below she's begun working on a 3 dimensional sunflower.   The flower you're looking at will be tacked together and soldered just like a normal suncatcher but there will be a second ring of smaller, inner petals that will sit up at an angle and really make this POP!  Chances are good that we'll see this completed next week. 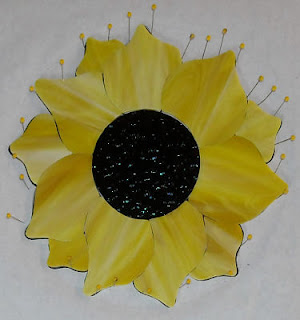 Cindy wasn't content with finishing her Zebra mirror so she started another round Fleur De Lis window.  Can we just all agree that it just wouldn't feel like a real stained glass class if there wasn't a Fleur De Lis window in the works?  Cindy has the FDL center cut out and has begun grinding it  together as you can plainly tell by noticing all the yellow headed pins in the picture. 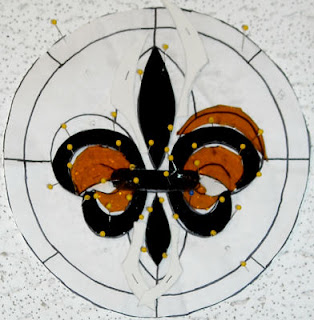 Look at all of these butterflies! Every last one of them belongs to Roxie and now that she's got them tacked together she'll be finishing them up as fast as she can.  These are nice and bright and will certainly stand out in any garden or yard. 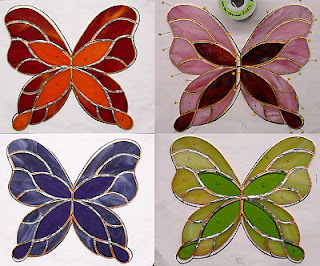 Lynn's Flamingo Window is ready to be soldered.  This is a picture that was taken earlier in the class so it differs slightly from what it actually looks like now.  Currently the border is all tacked in place and the brass channel has been cut and added as a finishing edge.  Lynn is so ready to have this piece completed that she already knows what she wants to make next.  I'm not going to ruin the surprise so you'll just have to wait until she starts it.  I love the border that she picked out for this window.  I never would have considered it myself but it works out PERFECTLY! 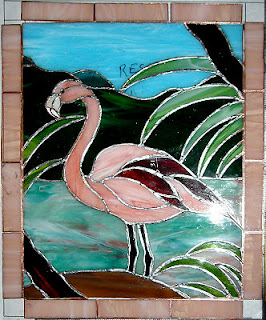 Beaks, eyes, feet and a branch.  That's all that's left for the flock of birds that Patty has been making.  I love all the colors in this-- there was no way Patty could lose with this pattern that allowed her to be as colorful as she wanted to be.  She's a little 'iffy' on one or two of the color choices but I think they look just fine.  Better than fine, even.  We'll certainly know for sure when she begins grinding this to fit next week.

Shelley's entered the final home stretch with her Mermaid window.  Everything is cut save for the corners which means that I'm sure She'll be soldering this when she comes in next week.  She's used the same blue glass for her border that she used in the two small fish.  As I always say, you can't lose when you match your border  to a color that is already used in your window. 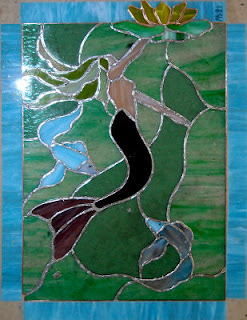 Megan!  That was the name that I forgot to add to Terry's pattern last week.  But as you can see Terry didn't need me to add a 5 letter name to the bottom of her window.  She did just fine on her own.  And since it's all cut out and tacked together I'd say that this may very well be a completed featured project in our next update. 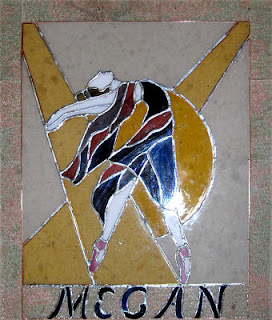 Myrt had to re-size her window that she had started so we used the same humming birds that she already cut out and constructed this new pattern around them.  Now there's an extra row of vine on the top which makes this version stand slightly taller than the one she originally started making.  This just goes to show how we're able to change things.  Patterns are penciled onto paper, not etched in stone! 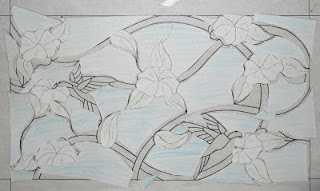 I don't have a picture of Susan's Pumpkin Lawn Ornament because I somehow forgot to snap a picture of it before she left.  Sadly, it had a broken piece in it and since we didn't have any of the same orange glass in the shop we were unable to repair it, but she'll be bringing it back when she returns and we'll get to see it 100% completed.  That I promise you.

Also, yes,  Sonia is still with us.  She's just been keeping busy working late hours and keeping up with her family.  Hopefully we'll get to see her next week so she can finish up her praying hands.