We're a tad late getting this post up-- Tropical Storm Isaac has put a bit of a cramp in the weekend so we've cleaned up the shop, removed all the works in progress and prepping the place for any possible water due to the storm that's approaching.   We're not really expecting anything other than a lot of wind and rain but since we're taking the old folks to Lafayette we'd rather be safe than sorry.  Ok, it's been a long day so let me sit bit and go over what was happening her last week on the cutting table.

It must surely be Christmas in August because Susan's snowman is all set and ready for hanging.  (All it needs is a noose???)  The beauty of this project is that Frosty has been completed well before he'll be needed as a decoration-- no last minute 'need-to-finish-him-QUICK' deadlines here.  We just have to hope that he doesn't melt in the heat.  You know, we were going to add a carrot nose but we don't have an orange paint pen (yet). 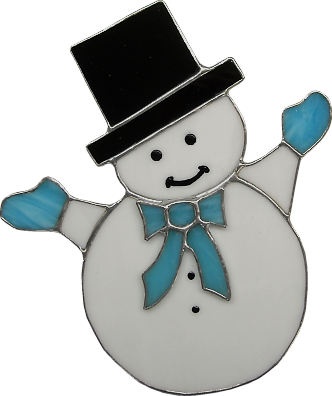 Wow, did Cindy do a lot of work on her Pelican Window this past week or what?!   There's really only the sky left to do and then she'll be soldering this.  She began wrapping it in class and you just know that she won't let this sit still until it's ready to be tacked.  I love the glass she picked for her water.  Can't you swear you see waves in it? 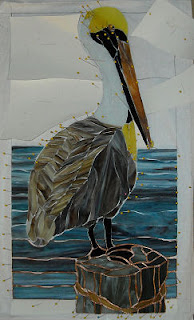 As you can see, Lynn has the snake portion of her large window all set.  Well, it still needs an eye but that will be child's play and is hardly even worth mentioning.  Lynn will be working on the "G" section of this window next and with a little luck she'll have her beveled doves wrapped and ready to be tacked as well.  Just wait until you see all of these sections soldered together. 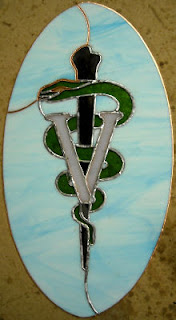 Next up we're going o take a look at the second Fleur De Lis Window that Martha worked on this week.  I didn't get a shot of her amber/brown FDL that fit together so wonderfully, but when she brings it back all wrapped we'll let you see it then  Nevertheless, as you can see from the way things are fitting together here on this Red version Martha has gotten the art of grinding down pat! 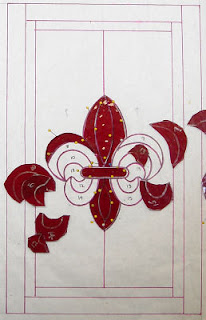 And Bonnie has started what is about to become her Tour De Force window.  It's a very elegant design featuring flowers and 2 humming birds.  It has a nice, gentle flowing feel to it.  To keep that flow moving in a graceful manor, Bonnie will cut, grind, wrap and tack all her flowers, leaves and birds.  THEN she'll cut out her background.  You see more of this process over the next 3 weeks or so. 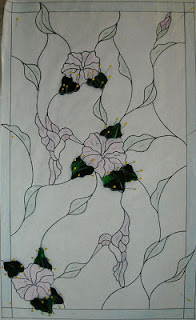 Myrt's working on her own Humming Birds and Flowers window and it's really taking shape now.  It looks like she just has one bird and one flower left to go before she can start wrapping this and get it ready for its border.  After that she'll move on to soldering it and we all know that Myrt makes quick work of any soldering jobs. 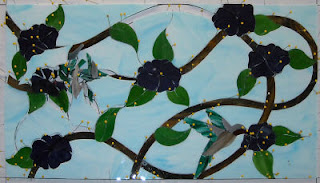 Just look at these birds!  Patty has the branch cut and will be working on 18 eyeballs when she comes back in.  After that it will be a simple soldering job and she'll be able to take these home.  You have no idea just how colorful these birds truly are-- the picture just doesn't do them any justice.  Hopefully we'll get a better look at this project when it's all completed and there's some light coming through the back of it.

Charlie Brown is another window that's really taking shape here!  Sonia has the sky traced out onto glass waiting to be cut but we seem to have 1 small problem-- we've lost the pattern pieces for CB's shirt!  They're bound to turn up soon but until they do Sonia will be cutting what pattern pieces she DOES have.  :-) 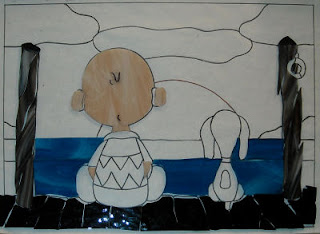 Wrapping things up we'll take a look at Terry's latest creation. She has her first window ready for soldering now that she has her border all cut out.  She decided to go with the same glass that she used in the background but I took the picture after her border pieces had been safely bundled to take home with her so she could wrap them.  Her second identical window (on the right) still needs the border and some small triangle pieces to square it off but these steps will be easily handled when Terry returns. 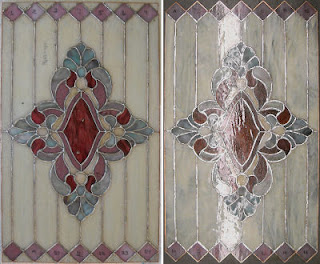 That's all that's fit to print this week.  Someone was MIA on Thursday and this was all we found to remind us of Roxie.  :-( 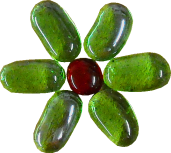