It was a Birthday week here during classes and a good time was certainly had by all.  It turns out that there's nothing quite like experiencing cake and wine while cutting glass-- the cuts may not be very straight but that's what a grinder is for, right?  Read on to find out just whose birthday it was.

Okay, here's what might be a familiar window but this time around it has a completely different color scheme.  This is Martha's first project (excluding her butterfly suncatcher) and it came out looking perfect.  Since she used a background with a single color picking a color for her border was easy.  Martha wanted an accent color in the corners and everyone agreed to pull from the color of the Dragonfly eyes, thus the amber corners. 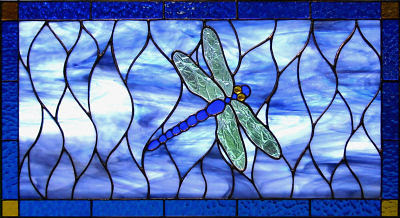 Ok, I can't keep you in suspense forever.  Cindy was this weeks birthday girl and the event was marked with cake, assorted food and wine.  And, on top of all of that, she managed to complete her Fleur De Lis Window.  Yes, we've seen her do this one before but it's a winner and patterns like this just have to be done more than once.  It's the unwritten Fleur De Lis law here down south.  (And Martha will be starting a variation of this Fleur De Lis for her next project!) 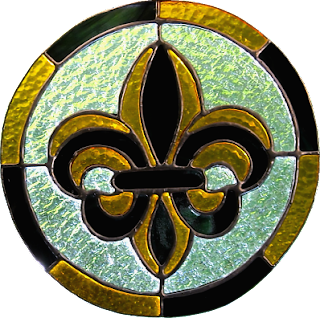 Sonia was hoping (praying?) for a window with some praying hands and that's exactly what she made!  We're still not sure if the two hands were purposefully cut from different ends of the sheet of glass to give them the shading that they have. All I know is that if it wasn't done on purpose it was certainly a serendipitous surprise because it really sets off a nice shadowing effect that helps separate the hands in your mind when you look at this window.  What's next for Sonia?  Well, let's just say that she'll be moving from holiness to peanuts. 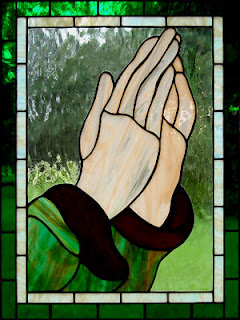 Roxie has completed the last two of her 3D Butterfly Lawn Ornaments.  She's already begun working on her next yard decoration: a 3D Sunflower very similar to the one Bonnie made last week.  There's going to be a subtle yet distinct twist to it though so I can't wait to see what it looks like.  You'll have to come back in 2 weeks to find out what it is, however.  :-)

This is Susan's Pumpkin Lawn Ornament.  The leaves are overlaid on top of the pumpkin to make cutting easier but in all honesty I think I could rework this pattern and make it a one piece design.  In fact, I think I will even though Susan is working on a smaller version for next week.  This is a really cute design and I think we'll be seeing more of these. 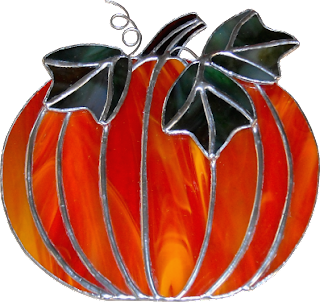 I know it's tough to see the difference in size between the two Pumpkins that Susan worked on this week but this one is about a quarter smaller than the pumpkin you see above.  This is ready to be soldered and Susan isn't afraid to solder at home so we'll see this one completed next week for sure. 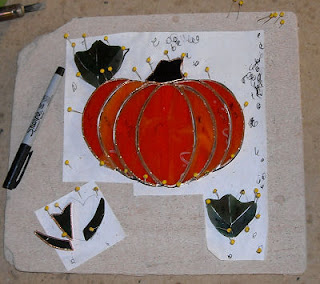 Lynn began her large Vet Window (that's Vet as in Veterinarian) this week.  The pattern washed out in the photo but this window is going to have it all--  Bevels, Initials, Doves and even a Snake(!)  Wait until you see this one start taking shape.  Lynn cut out the staff and the snake all on her own and she cut them very precisely so I have no doubt that she's going to do a great job on this window.  Mark my words, it's going to be impressive.

Bonnie is making another Sunflower Lawn Ornament but this one isn't going to have the second row of petals to give it a 3D effect.  Shouldn't a sunflower be yellow, you ask?  Nope, red ones are common also.  So don't say that you never learn anything here and don't even think for a minute that Bonnie's newest version won't be just as nice as her last one was.  I can safely say that it's going to be a quick and easy project since she got it all cut out and ground with time to spare while in class.   We'll see this one completed next week for sure. 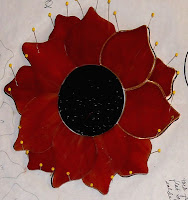 Terry's latest set of windows is a real eye catcher.  Although we've seen this pattern done before Terry's choice of colors make the pattern look completely different.  We re-sized the background using five diamonds as accent pieces but the lead lines were too close together and we had to redraw it using seven diamond.  That worked perfectly and it's why you can see 2 sets of lines on Terry's pattern.  The lines drawn in black were the ones that didn't work out so she's going by the blue lines now instead.

And Patty's Flock of Birds are really taking shape here.  She's begun wrapping them now and will be soldering this window together real soon.  Now that it's almost 100% ground you can really get a feel for what this is going to look like-- bright and vibrant with birds that POP!

Meanwhile, Myrt's window is all cut out and waiting to be ground.  With the flowers and leaves cut Myrt's main concern is getting this to fit all together.  She always managed to breeze though her windows so I have no doubt that she'll get this in one piece in no time at all. 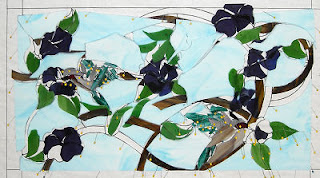 So that's about it.  We had a VERY productive week as evident from the number of completed projects in this post.  And most of the projects that are in progress made big headway as well.  There's never a dull moment while we're all working in the shop and sometimes we're all laughing so loudly I worry about what the neighbors think is going on! 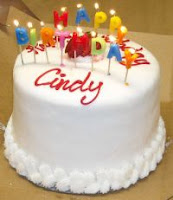