I have to start right off and say that Terry's Ballerina Window turned out to be all that and more.  I knew I was going to like this from the moment we had the basic pattern sketched out on paper.  (Sometimes you just know.)  Just look at how perfect the glass is for the leg that is under her dress.  You'd swear you are looking through the dress and seeing her leg under it.  Even the name in the border worked out perfectly (but I will point out that the letters aren't nearly as dark as they turned photographed here in the picture).   Terry has a second window WELL underway and when we take a look at that one  you'll know we're at the end of this post. 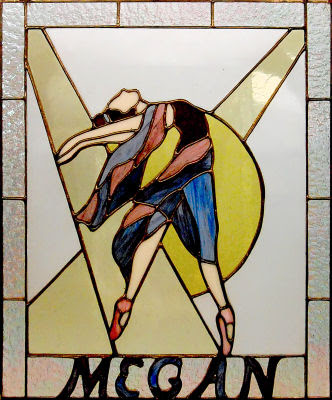 Lynn's first window turned out nothing short of perfect.  From start to finish Lynn made each and every step in her Flamingo Window look easy.  It's hard to believe that this is her first project, isn't it?  As I've said before I'm generally a fan of a darker border but this is my exception to the rule.  Lynn plans on making a much larger window when she returns and I have no doubt that it's going to be another winner. 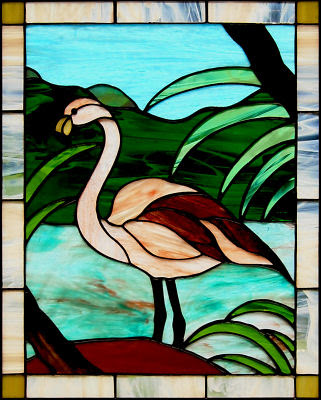 Bonnie completed her 3D Sunflower Lawn Ornament and it turned out really nice as well.  The flower itself is about 10 inches in diameter and at a last minute addition Bonnie decided to add two leaves to that pattern.  And it was a good choice because it really makes the flower look complete, don't you think?   We had to alter the original pattern for the inner ring of petals but the end result is spectacular! 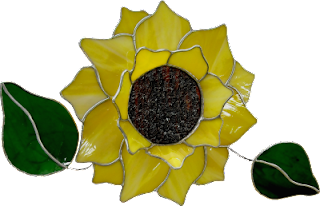 Next up we're going to take a look at two more 3D Butterfly Lawn Ornaments that Roxie completed this week.  She went for bright, striking colors so they wouldn't blend in to the scenery.  In fact, even her green butterfly is vibrant enough to resist disappearing into green leaves or grass.  Roxie has two more of these to go before she moves on to something else so I'd expect to see them finished in our next update. 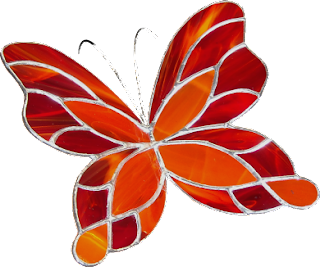 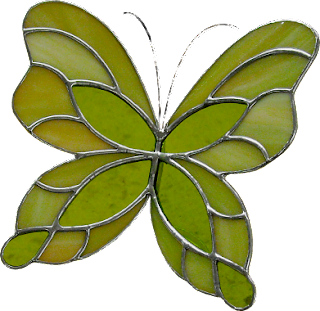 Patty has begun the grinding process on her birds and we've had more than a few people from the other classes  pull these out and take a look at them in person.  Bright colors seem to be the motif for our Thursday night class.   They already look fabulous and I can't wait to see these completed.

Now here's an interesting picture.  Myrt cut the vines and all of her background glass for her Hummingbird Window while she was in class this week but she took it out to the car before I could get a picture of it.  When I helped take Terry's window out I noticed that Myrt hadn't disassembled her window-- just covered it in bubble wrap to stop it from shifting on the ride back home.  So I took this picture of it while it was in the trunk of the car under the clear plastic bubble wrap.  It may not be very revealing but you get a general, blurry idea of what she accomplished.  :-) 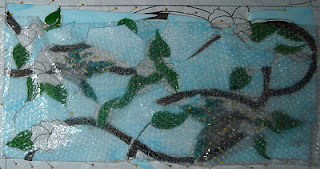 Martha managed to get all of her Dragonfly Window assembled and even went so far as to solder a few lines on it to get a feel for the soldering process.  She's going to be a soldering fool when she returns and, with a little luck, she may even take this home with her.  Her corners were cut from a glass that's the  same color as her Dragonfly's eyes so the corners provide an accent color without bringing in something completely new.  And that's what I call perfect. 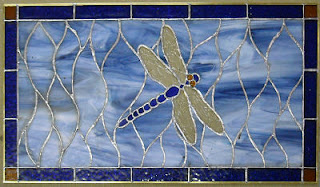 This is Cindy's second round Fleur De Lis Window and she really wasn't sure if she should make the border alternate colors or not.  She toyed with the idea of 2 borders, each in its own color but everyone agreed that a single, alternating border would probably look best.  And even though it's not completelt cut out here in the picture I have to say that I think it was the correct decision.  It matches the alternating glass in the Fleur De Lis just perfectly. 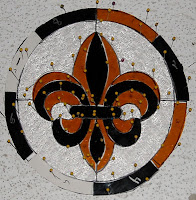 Ann has returned after a few weeks of traveling both near and far.  Her last window was rather large but her new project is much smaller.  In fact, it was so small that her pieces were going to be incredibly tough to duplicate 4 times  around so we enlarged the center part of her design to make it a bit easier.  She'll be making two of these designs and is cutting them both out at the same time.  Since she has her red cut she'll start cutting the rest of her colors (which she has traced out onto the glass already) when she returns next week. 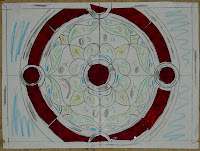 Shelley's Mermaid Window is all tacked together and just waiting to be soldered.  She went over most of the front side so that means that when she returns all she needs to do is work on the back side and then this should be completed.  This is one of those windows that's really going to come alive when it has some light behind it.  The mermaid's tail is cut out of a  deep purple (Smoke On The Water) glass and her border corners match the tail perfectly. 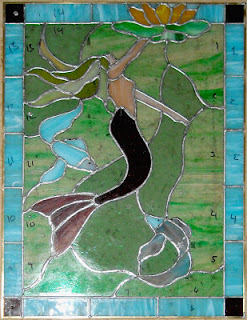 Sonia is back in action here at class and her praying hands are ready to be soldered!She has her double border all cut and attached as well as the finishing brass channel that surrounds the window.  Sonia's already talking about a Charlie Brown Project so I think she plans on having this one finished shortly. 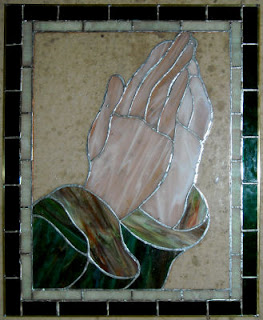 And now you've come to the end of this weeks update as signified by our look at Terry's newest window.  It's a Semi-Victorian design that we've seen done before but the background will end up differing  somewhat to make it fit a taller opening.  It already looks great so I can't wait to see how far Terry has gotten along on this when she brings it back in to class next week. 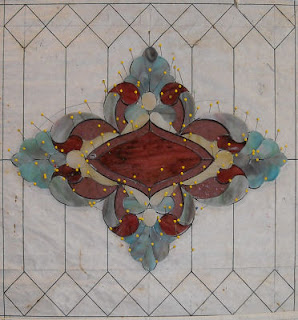 That will do it this time around.  Next week is Cindy's birthday I heard someone mention cake.  I think it's going to be a HAPPY birthday!  :-)