Alligator Lizards in the Air

Brenda's Mallard Window is certainly every bit as striking as we all thought it would be.  Again, I would like to point out the subtle use of color in Brenda's latest piece.  Muted browns make up most the Mallard which is accentuated by 2 bright orange feet, a deep green head, and a few bright blue and white feathers.  The sky is a mix of light blue and purple which isn't the first color you'd think of for a sky, but when you see it in this window you know it's the perfect choice. 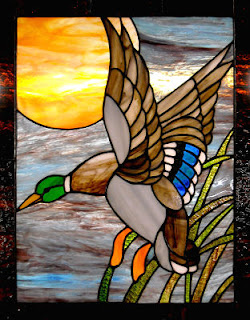 Bonnie completed her second Vigil Candle Holder and it's made out of  a deep, fiery red glass with a clear cross and a clear top.  Bonnie is getting very good at making these Candle holders! It's also given her a heads up about how to solder a 3D item since she plans on making a lamp shortly.

Donna has completed her large Angel Suncatcher and it turned out heavenly (pun very much intended).   She used an Iridized Krinkle Glass for the wings that you have to see in person to believe.  I've always favored Spectrum's Iridized Granite glass for wings but I really do like the look of Krinkle now days. 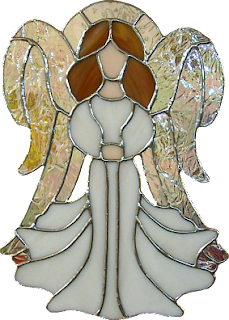 Jane's Fish Window is also among our finished projects this week and color-wise it's perfect.  Remember that when she came in last week only the fish was cut out and tacked together with no background or border glass cut.  She didn't want blue glass for the background so we found a perfect off-green.  Then for the border she went back to the deepest green used in the fish's tail and 3 fins.  Perfection! 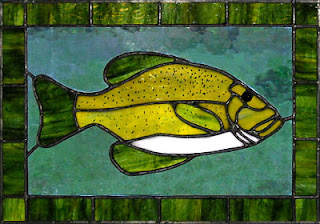 What's this? It looks like a butterfly to me and that means we get to introduce our newest student, Mary Grace. As you can see from her butterfly her work was exceptional-- and she certainly wasn't afraid to make her suncatcher bright and colorful.  And that's what a suncatcher is all about 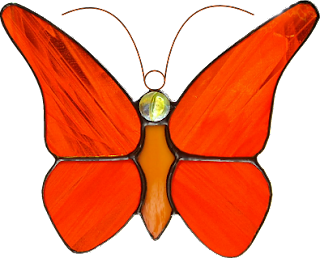 Brenda resumed work on her Hibiscus Window by beginning to grind it.  The larger bottom flower is all fitting perfectly and that puts her at about the halfway mark for this project.  Wrapping these pieces shouldn't be hard so I suspect this will be done quickly for Brenda.

Cindy is hard at work making mirrors again.  I think that we can officially call her the Hand Mirror Queen because I know she's easily made 40 of them at this point in time.  And by next week she may have 5 more completed!  Here you can see that she has 2 of her latest ones ready for solder and a third is now ground to fit.  I told Cindy that it might be time to trace out a new pattern because this one looks like it's been through the war!  lol 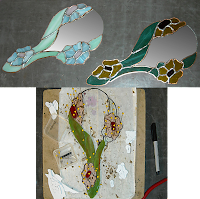 Next we look at our second Angel of the week, this one being made by Betty.  She had ground everything last week and took it home with her to wrap so when she came in this week she tacked it all together and then learned how to make a border pattern for an oval window.  Like anything else it's easy once you know how.  Betty poured through every color of glass we had looking for a border color before settling on this elegant white.  She ground it and took it home with her to wrap which means that we'll see this window completed next week for sure.

Linda began working on her first window (with us) and it's a variation of a design last made about 5 years or so ago.  She knew she wanted 2 shades of green and a deep pink/burgundy to be used as accents.  When she got it cut out (quickly and efficiently) both Betty and I agreed that her accent color was wrong.  Then when we saw the red glass that Bonnie had used in her Candle Holder next to these greens we all knew that Linda had found the perfect color for this window.

Susan continued cutting out her Fleur De Lis Gloves Window and now she's got most of the cutting completed.  There are only the inside borders that surround the actual Fleur De Lis left to go and then Susan will begin grinding this project.  She's moving fast on this and the small pieces are NOT intimidating her at all. 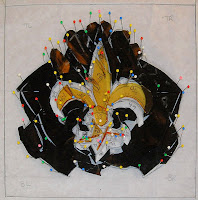 Meanwhile Lynn made some major progress on her Seahorse Window.  I think this may be the first seahorse we've seen done here in glass save for a small on that was was part of a larger Ocean Scene that was made a few years ago.  That said, Lynn is setting the bar pretty high for anyone else planning on making a seahorse because this is looking better than great.

Ann is moving right along with her Geometric window.  I think that the bulk of this has been cut (certainly the corners are).  She discovered what was almost a problem this past week when she realized that she wanted the bumpy side up on her red glass.  The problem was that she had cut and numbered her pieces on the smooth side (which she had to do to cut it) and then forgot to flip all her pieces around.  Luckily this pattern is all mirror images so things were able to be swapped to the other side without a problem.

Martha's Tree Frog is now wrapped and tacked.  The eyes have been re-fitted so she could use  large orange globs that give the eyes a three dimensional effect.  He still looks a little blind but we're going to paint black sections onto the eyes when it's completed to fix that.  Next up is a glue chip background and then a border to finish this off. 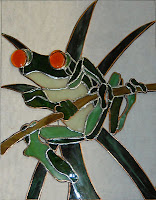 The majority of Myrt's Hot Air Balloon Window is now wrapped and tacked but she still has a way to go before she begins cutting out the background glass that will form the mountains and land.  I think we're getting to the point where Myrt will need to decide what colors they will be so that we'll have the glass when she's ready to begin cutting. 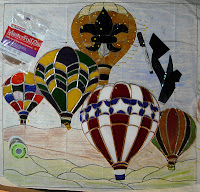 Shelly has made some big progress on her Woman in a Tub window this week.  Not only is it all cut out but she also has more than half of it ground.  She has her pieces a little strewn about so she can make sure everything is fitting together nicely but I wish I noticed that the lady has one of her legs lying on the floor near the tub.  Had I seen that I would have moved it! 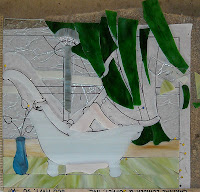 While Jane completed her Fish Window this week she also decided to start working on this round geometric design.  I turned my back and the next thing I knew Jane had everything but the border cut and ground already!  Working on a circle or an oval is never easy because your eye will always see any errors in symmetry but so far it looks like Jane has this window completely under control. 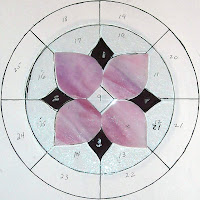 And Tim has been so busy that it isn't even funny.  Here's a look at his two Tiger Eye/ LSU Windows as they now stand.  With both Eye sections and both LSU sections ground and wrapped Tim tacked everything together and then began cutting out borders.  You can see that the border has been completely cut around the bottom window but the top one still needs some strips to finish it off.  And that will certainly happen next week when Tim returns. 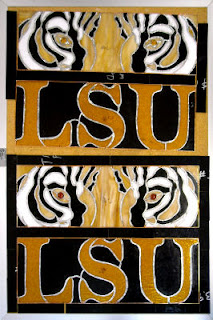 Terry's latest flower window is all together now.  When she brought it in it was missing its border but Terry quickly decided on Spectrum Root Beer (brown) and then got it cut, skimmed, wrapped and tacked.  In fact, the only thing left to do now is add a brass channel around the edge and then solder the back of this lovely window. 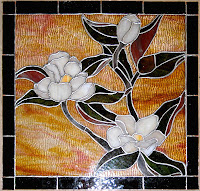 Normally this would be the end of our update for the week but Donna sent us these pictures of projects that she's been making at home between classes.  I briefly saw her working on this last week in class and now it's completed.  She handled the wire work for this wonderfully right down to the tinning of the copper wire so it matches the rest of the metal. 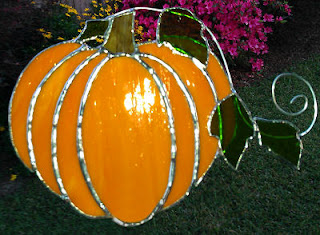 Donna also made this wonderful mosaic stepping stone for her back yard.  I've never made one of these myself and although a lot of our student make them (at home) I've never even seen a picture of one completed by one of our students.  So thanks Donna for sharing this beautiful piece of art with us.  Donna is another student that makes me proud to say that she's a student of mine! 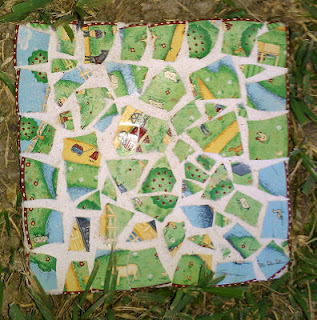 Okay, so during our Wednesday morning class we had someone ask about some lyrics that occur in America's song 'Ventura Highway'.  We all wondered what exactly it was that they were singing about.  "Alligator Lizards in Your Hair"?  Well, I had to find out and here's what I discovered.   The song's writer/singer has revealed that the lyrics "Alligator lizards in the air" is a reference to the shapes of the clouds he and his brother saw back in '63 while his father stopped to fix a flat tire in California near a town called Ventura.  And now you know the rest of the story.