What Comes Around Goes Around

We're back yet again and this post features not one, not two, not even three, but six (yes, 6) completed projects.   Our students were certainly busy during the past week so let's not waste any time and get right to business here.

Brenda is first up and what you're looking at is her latest window featuring a Woman as the subject.  Everyone who saw this while it was under construction was anxious to see it completed and we were lucky enough to hold it for a week for all to see in person.  It really is a perfectly designed window.  A lot of people would be content to pick a green to use for the leaves coming out of the vase but Brenda picked 2 different greens which go well together and help give it depth.  It's little things like this that help make a window. 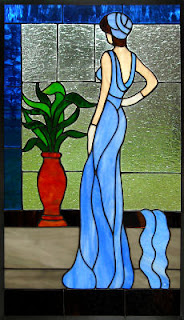 Bonnie's Vigil Candle Holder is now finished and I have to say that it is really a stunning piece of work also.  I love deep blues so there was just no way that this project wouldn't appeal to me.  This week she made the lid of the candle holder and it was constructed out of 8 pieces of glass that were specifically cut for each side.  Nothing hand made is ever 100% perfect (but we come very close here in the shop)  so each side has a slight variance which we accounted for in each of the 4 sides the cover.  When the cover fits atop the bottom section it does, in fact, become perfect.  :-)

Next we look at Donna's Clear Textured Abstract Window.  There isn't a curve in this design yet it's something that demands attention when you see it.  This window is all about balance and Donna's textures were placed perfectly.  It's hard to explain the concept and the best I can do is point out the most obvious place were the window could be thrown off:  The center-most piece has the heaviest texture in it which sort of looks like a clear cloth has been draped over the glass (which insinuates a heaviness.)  Well, if this glass were used on one of the side pieces it would make that side of the window look lopsided.  Your eye  just wouldn't be able to balance it in your mind.  But placed in the center as it is, Donna has achieved perfection.  She was originally going to color this in black but in the end everyone agreed that leaving it silver was the way to go on this.

Next we have another clear Textured window that was made by Donna's sister, Jane.  I didn't get a picture of this in the last update because I had forgotten to snap a picture of it, but this week it's already completed so this is the first and last time we'll be showing it here.  Like the other clear window we just looked at, we all decided that leaving the lead silver was the way to go with this.  The most interesting thing about this window is the fact that she only needed to cut 6 pieces of glass to make this!  The border and the Fleur De Lis center are beveled and already cut for us.  But it's a beautiful window nonetheless. 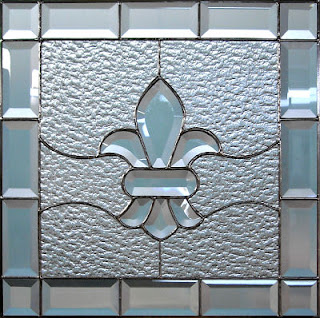 Susan's latest Flower Lawn Ornament is completed and it's a perfect match to the other perfect ornaments that she's made in the past.  The assorted colors that she makes the flowers and the colored globs that she uses for the centers make this a very colorful and fun design.  She has another one in the works so we'll see her next Flower Pot soon. 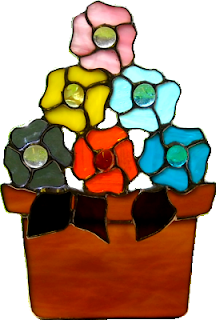 And our last completed project for this update was made by our newest student, Linda.   Linda is another student that's traveling from Houma to join us but what that links all these new students together is the fact that they are all so good at what they are doing.   Linda used a deep green glass for the wings of her butterfly and then a purple body and head.  The end result is a beautiful suncatcher that was made in record time with what appeared to be minimal effort.  I suspect Linda will be doing great things with us. 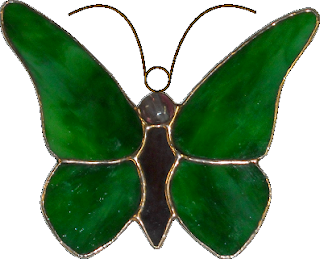 This next project is a great example of how wonderful our new students are working out.  Betty's Angel has been completely ground and is now ready to be wrapped.  She's decided to make this an oval window rather than rectangular so once this is wrapped and tacked she'll trace around her completed oval and then use a compass to make the border fit the oval perfectly.  Since Betty took this home to wrap I'll say that she starts soldering this when she returns in two weeks.  Just look at how precise her grinding is-- you can see the black line on the pattern between every piece! 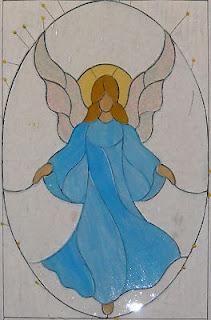 Of course Brenda wasn't content on just finishing a project this week.  She also had to work on her Mallard Window as well.  When we last saw this is was just a pattern, now it's all cut out and 75%  ground as well! The color of Brenda's sky is just what I like to see our students use in their work.  It's blue but it's not cartoon blue so it gives the window an extra bit of realism.  This is going to be a beautiful piece of work. 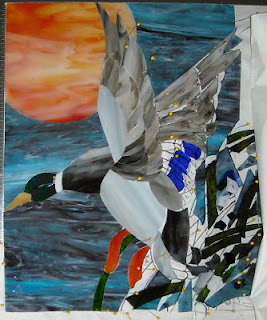 Martha has begun wrapping her Tree Frog and it's a winner!  This is certainly a window with character.  She still needs to fit the frog's eyes into place but we'll do that when it's tacked together so we can ensure a perfect fit.  This one is moving right along for Martha.  I think she'll really be thrilled with this when she's finished with it. 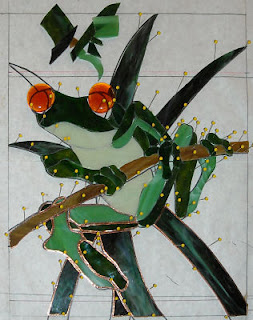 Cindy's Tribute Window is another one that's just about completed.  All the cutting and grinding is over with and that means that there's only some soldering left to do.  The double border was a great design idea and the final outer border has been cut from brown glass to tie into the other brown glasses used in the picture section of this window. 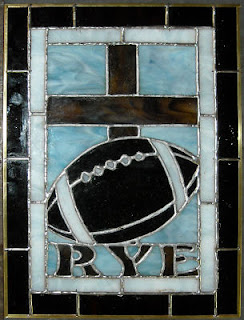 Myrt is so close with her window.  All the hard work is coming together now and you can already see how colorful this is going to be even before it's lit up.  I particularly love her red, white and blue balloon.  The way the stars get smaller as they wrap around to the back side of the balloon really insures that it has a rounded, 3D feel. 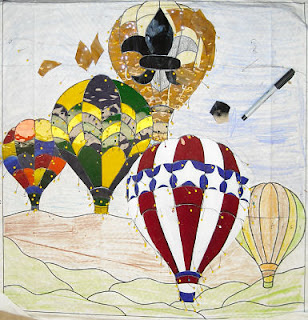 Shelly made some  MAJOR progress on her Lady In A Tub window. In fact, I think she has it all cut out now.  The flowers and the bubbles will be added when she has this completely ground and fitted to make it easier to align the flower stems.  The bubbles will be added later because she'll be using globs for the bubbles which don't fit the pattern as it was originally drawn.  I have to say that Shelly did very well working on this while she was at home.  She's moving along wonderfully on her own AND in class. 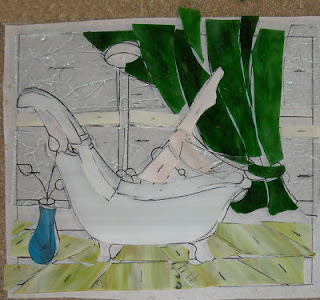 Susan finished her Flower Lawn Ornament and started drawing out her next project.  It's going to be a Fleur De Lis set on top of two gloves which are set on top of a football which is set in front of three cheerleaders.  Okay, so I was lying about the cheerleader part, but seriously speaking this is another major undertaking by Susan, especially since she's reduced the size.  Lining up the fingers in the gloves will be crucial to making the glove effect work but I know Susan is up to the challenge. 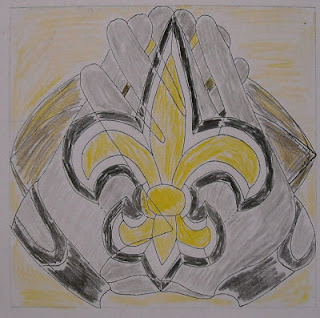 Terry continued working on her Two Birds Window and it's also basically completed save for some solder.  In fact, the front side is fairly well soldered already and Terry only brought this is so that she could get some brass channel around it.  This will be another completed window before we know it. 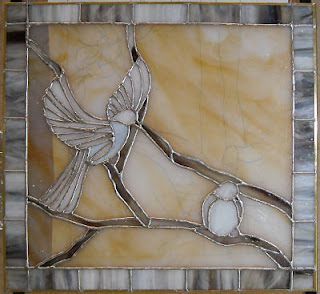 Speaking of Terry and completed windows-- This Pelican window seemingly came out of nowhere.  I remember sketching out the basics for it a week ago but that was where we left it.  And then this week Terry came in with the window all cut, ground, wrapped and tacked needing only a border to finish it off .  Well the border is cut and the channel is on it so there's only the back side left to solder. 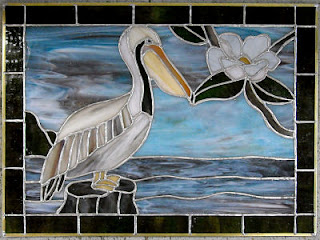 Tim has the second of his tiger eyes pretty much completed.  He's got it all ground and began wrapping this one while he was in class this week.  Not only has he got these pair of Tiger Eyes completed, but he has all of the purple cut for his LSU letters that will go underneath these eyes. And is waiting for his yellow glass to come in to complete these 2 windows.

Lynn came up with this desin on her own and she's making some excellent progress on it.  She began to cut out the Seahorse while she was in class and then took it home with her to continue working  on it during the week.  She's already sent me a picture of it all ground and asked if I thought it would be okay to wrap it.  YES!  It fit perfectly.  There's something very classic about this design that I can't quite put my finger on.  I like it!  I wish I had come up with the pattern myself.

Patty has begun soldering he lamp and it's moving along wonderfully.  The grid work consists of nice straight lines and all of that is soldered.  That means she only needs to get the bottom flower section soldered to have the outside of this lamp finished.  The curved lines will be a bit tricky but Patty now has a lot of experience working on a 3D object that rests in your lap as you are soldering it.  I almost can't wait to see this completed.  (Almost) 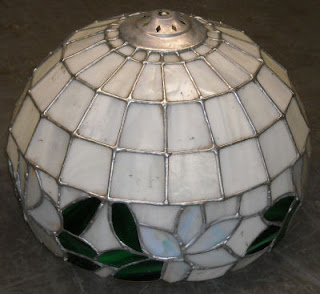 Ann's window is almost completely cut out.  In fact, it's so close to being ALL cut out (only the background glass remains) that she's begun grinding it.  She's started in the upper left hand corner and you can see the pins holding her pieces in place.  Kudo's to her for her use of pins.  The more pins you use to hold your ground pieces together the better off you are when you wrap your glass.  The pins help ensure that nothing shifts and allows for the foil that needs to be placed in between each piece of glass which could make the window expand if not allotted for.  Ann had no problem with her last two windows so I don't expect any problems with this one either.

So that about wraps things up this week.  It's been VERY busy and we've been seeing a lot of students whip out projects faster than we ever expected.  That means we always have something new to show you each week in these weekly updates, so I'm not complaining.  In fact, it's very rare when don't have a completed project to unviel each week.

We'll be updating our Blog again before the end of the week so be sure to come back and check out everything that there is to see!