Mardi Grass Marches Over Our Classes

We were missing a few students this week due to our Mardi Gras Parades and Celebrations.  Even so, Fat Tuesday didn't stop the majority of our students from attending classes and we even have 2 completed projects this week so let's take a look.

First off we going to say goodbye to Jane's Heron/Bayou Scene Window because it is officially finished!  It's amazing when you look at the completed window because you get so caught up in the design that you don't see all the pieces it takes to make it.  There are almost 50 pieces just in the flowers and leaves.  Add to that the Heron which add another 37 pieces of glass and then all of the glass that makes up the water.  And I don't think anyone would ever suspect that there are 17 tree limbs in Jane's picture either!  Well, each of those pieces were cut by Jane and she did a great job making this. 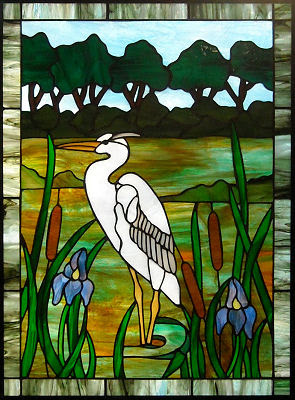 The second finished window we're going to look at is Brenda's Number Nine Window.  I had to ask her what it represented since it dawned on me that I hadn't a clue what the design was all about.  Brenda told me that it represented Recovery.  Now I suppose I could call this a Recovery Window but I think that  'Number Nine Window' has a more intriguing name.  One thing we know for sure is that the colors in this are stunning.  Brenda picked some beautiful contrasting colors which make it light up spectacularly. 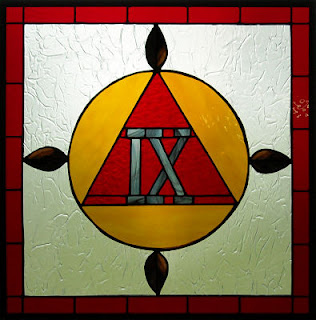 And our last completed window this week is Donna's Macaw Window.  This one is going to be a gift and I can't imagine anyone not loving this colorful window.   She left the solder silver but colored the solder glob that she used for an eye as well as the wires under it black so that it perfectly matched the picture she based the design of this window on.  Donna picked some beautiful colors that really make this project an eye catching window. 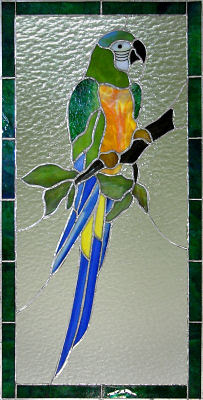 Once Donna finished her Macaw she immediately began making this Geometric Window using all clear classes of varying textures, plus a few bevels here and there.  By the time she left class she had it all cut and ground.  The beauty of a window like this is that you can use up a lot of odd pieces of glass you may have hanging around.  That said, Donna paid a lot of attention to the placement of the textures so the window wouldn't appear unbalanced.

Bonnie now has the bottom section of her Vigil Candle Holder all assembled.  You may not have realized from the picture last week that it would be a 3D project but there's no missing it in this picture.  Next week she'll make the top to this and take it home.  It looks great even without the top though, doesn't it? 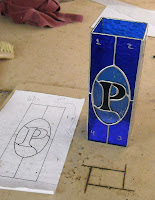 Ok, Ann is making some serious progress on her latest Geometric Window and now you can see how the smaller corner sections fit with the larger center piece.  Speaking of pieces, there are a lot of them in this window-- and almost all of them are small!  But as I said, Ann is moving along quickly so it won't be long before you see this finished.

Betty, our newest student has begun cutting out her first project and it's a  variation of the Angel Window that Tim made for his first project.  Betty has reduced the size of the pattern by about a quarter and modified the halo surrounding her Angles head.  But the most amazing thing is that she got it all cut out on her very first night.  And even though it looks like it's already ground- it isn't.  Her cutting is just that good!  She'll begin grinding this next week and I don't think she'll work too long on getting that step finished.

Fran made a surprise appearance and has begin working on this Fish Window that she's been designing.  You can see her drawing it out in the picture below.   Her ability to draw astounds me and I wish I had her talent.  She's going to start cutting out the fish and the smaller fish that this one is after and once they are cut out and tacked she'll draw a background scene around them to tie it all together. 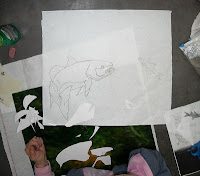 After completing her Number 9 Window, Brenda's began work on her next project which is featuring a woman.  For some reason it takes me back in time to the '20s or 30's.  Brenda is really anxious to complete this and she's been burning the midnight oil to get it this far along.  It's cut, ground and almost completely wrapped so It should be about finished when she brings it back to class next week. (It looks like I snapped this picture while Brenda had the blue piece that should be to the left of the plant at the grinder.)

Martha continued grinding her Frog Window and she's got all the tough to handle tiny pieces finished.  That means that there are only easily handled large pieces left to grind when she comes back in next week.  With the hard part almost over with Martha will most likely end up wrapping this during her next class.

Shelley traced out the pattern for her Lady in A Tub and then began working on it by choosing a color for the curtains in the room.  Now that the curtains are cut out she'll move on to the floor next.  After that it should be easy to pick colors for the rest of this.  Shelley is going to use glass globs for the bubbles so she'll be making this window sans bubbles until she has it ground and fitted. 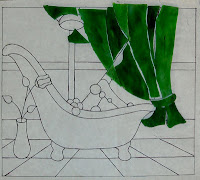 This is the first of Tim's two Tiger Eye sections for his pair of LSU windows.  He has the second one more than halfway ground so we'll get a look at that one next week.  The only real difference between the two are the colors of the eyes which you'll see better later on.  Tim has been working at home on these and I'm astounded at how well he's doing on his own considering how new he is to making stained glass..

Meanwhile, Terry finished tacking together her Two Birds Window and she managed to get the border attached as well as the brass channel that surrounds it all.  With the front side soldered already I'd say that we'll see this one completed when she comes back in next week. 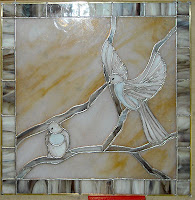 Susan has nine flowers in her pot and they're all ground and ready for foil.  Judging by the way she's been knocking these Flower Lawn Ornaments out I'd say that Susan has figured out all the tricks to grinding and fitting this pattern together.  She decided to use globs for the flower centers and will be tacking three off-green leaves on top of the finished flower pot for extra effect. 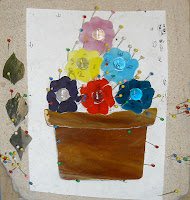 And this is the end of our update (darn).  When we return again we'll be checking out what happened on the third week of February.   That will include a new student and a look at six (yes, 6!) more completed projects.  See you then!

Posted by Bayou Salé GlassWorks at 10:56 AM