We Win! The Garden Club Loses (But There's No Rivalry Here)

We're looking at five completed windows this week but first we're going to open with an important, useful stained glass tip.  Grinding your glass to fit is an important step in making professional looking stained glass.  Many people think that the water that lies in the grinder bed is there solely for the grinder's benefit,  but it's also there for you as well.  Flowing water coming into contact with the grinder wheel carries away powdered glass that forms as you are grinding.  If there's no traveling water or even a lack of water you'll see a white power form which coats the grinding wheel and prevents your glass from grinding quickly.  So pay attention the next time you find yourself in front of the grinder and you'll see that a little water makes a HUGE difference in how quickly your piece stays on the grinder.  It's a very measurable difference that adds up quickly.  Oh, and that extra water will increase the life of your grinding wheel as well.


Okay, with that out of the way we'll move onto our students projects starting with Martha's Tree Frog Window which is now completed and most likely hanging in her window.  The orange border she picked matches the orange eyes perfectly making this window nice and bright without introducing a new random color.  I had originally envisioned black slits on the eyes but Martha didn't like the idea of the stark black on top of the orange.  In the end we simply sandblasted slits on the glass which gave it a matted, lighter effect that worked perfectly for both of us.  Now that's what I call a win-win situation 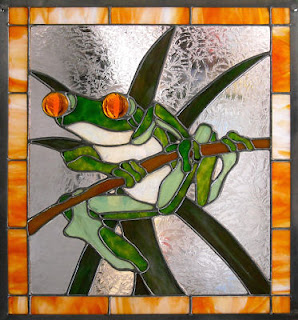 Wow, I know that Shelley went through some periods of doubt while she was making this but look at how it turned out!  Her Woman in a Tub Window is different in numerous ways from the previous versions we've seen done in class and it looks WONDERFUL!   First off, there's barely any wall in Shelley's version as she used clear glass to give the illusion of one large window (which fits the curtain much better).  She also went with a single color floor which I wasn't sure about while she was cutting but I have to say worked out perfectly.  And lastly, she went with a double border which always increases the overall appeal of a window.  Shelley used 4 shades of green in this which brings with them a feeling of life.  Great job! 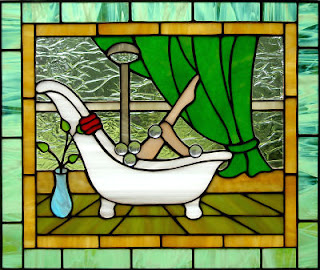 I just knew that Cindy would have this Monkey Window completed this week.  The lettering came out perfectly, the monkey is as cute as a monkey can be, and this is the perfect gift for a new born baby.  I'll probably need to save the pattern because replacing the name will be simple if anyone else wants to make this. 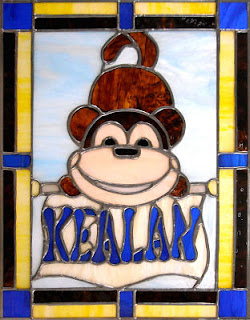 This Iris design has always been a favorite of mine and Donna's is no exception.  Using clear glass for the background and the border is usually problematic but Donna's choice of a heavy ripple glass for the border gives it more than enough contrast with the light, airy clear glass that she used for the background.  With color only being in the flower and the pot there's nothing to distract your eye  from the subject matter which is exactly where we want people looking.  I've got to say that Donna made this look too easy!

And our last completed window of the week was done by Terry.  This was originally a lead came window that needed some dire repairs.  There really wasn't much left to save so Terry did the next best thing by copying the pattern and then remaking it in glass that is as similar to the original as she could find.  The size is a perfect fit and this just dropped into the place of the other broken window.  All in all this is another great job by Terry. 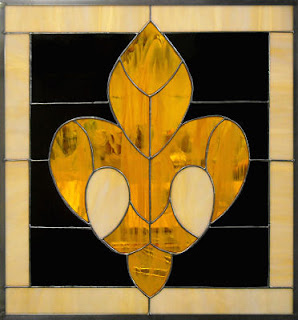 Terry also continued working on her duo-chromatic Faux-Beveled window that is looking more and more striking with each passing week.  With the channel on and the front side completely soldered I'm going to say that we'll see this window completed in out next update.  When a window looks this good BEFORE it's soldered and washed you know that you have a winner on your hands. 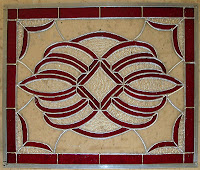 Now that the border is all cut and ready to be tacked I have a sneaking suspicion that Brenda's Woman and Child Window will be seeing the light of day when it comes back into the shop next week.  She's put a lot of work into this and it certainly shows.  Brenda has her own glass studio at home and is making full use of it between classes. 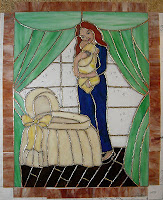 Jane's Rose Window is officially ready for solder!  Going with a single colored border was the perfect thing to do since she has two clear background glasses next to each other.  Tying the border into the green leaves gives this window a well balanced look to match her expert work.  She'll be soldering this at home so expect to see it completed in our next update. 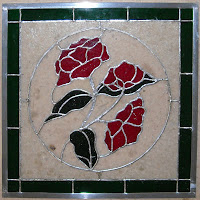 Susan's Glove/Fleur De Lis/Football window is just about completed.  It's all been tacked together save for the final black border which she'll skim, wrap and tack while she's home this week.  You may not see it in this picture but there are a staggering amount of pieces in this window and most of them are almost too small to handle.  But Susan has ploughed through this project and made it look easy with an attention to detail that I'm so very proud of. 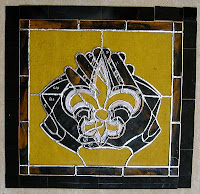 Next we have Martha's second project this week and it's her latest version of the Dragonfly window she made when she first came to class.  She's added a clear inner border and has the final orange outer border all cut and ready to be ground.  Once that's done she'll wrap it, tack it and get ready to solder.  Martha also has an angel in the works but she'll resume work on that once this is completed. 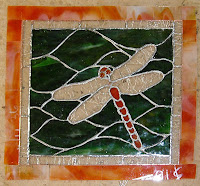 Myrt's Pelican Window is moving along quickly.  She's started grinding this and as you can tell by the number of small yellow pin heads that are visible, she's got the bulk of it ground.  All those balloons that she's been cutting on her other window have certainly paid off because she's cutting through the glass in this window like a hot knife through butter!  And Myrt is so intent on finishing this window that she even favored us with her presence this week rather than going to a boring old Garden Club Meeting. *

Cindy's Bathroom Mirror is moving right along also.  It may not be easy to see what is happening here in this picture but the rectangular mirror (not in the picture) will be surrounded by a flower trellis filled with Morning Glories and assorted leaves.  This design leaves a large empty mirror in the center for an unobstructed view of whoever is looking into this mirror.  Cindy is making this by constructing her four edge borders and then attaching them to the center mirror.  In this picture you can see that she has three of the four sides completed and is working on the last section. 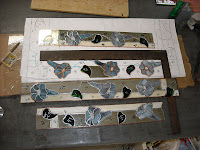 Donna not only completed her Iris Window but also got 12 Beveled Triangles all wrapped and ready to be be put together next week .  I think Wednesday night is going to be a big 3D Star making class which will actually be very fun.  The Stars look very impressive but they're very simple to make once you learn the simple process that's involved. 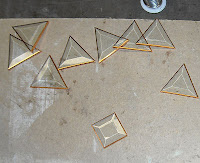 Lastly, Tim began working on numerous projects this week.  He's wrapped a Fleau de Lis Bevel to use as a centerpiece for a window, he has 12 triangle bevels all set to become a 3D star next week and he's cut out enough border glass for 5 blue picture frames.  Here are his edge border pieces all skimmed and bundled in rubber bands to take home to be wrapped.   They are sitting on the piece of glass that they're cut from and for some reason or another the picture shows the color of the glass PERFECTLY!  Why can't all my pictures turn out this colorful? 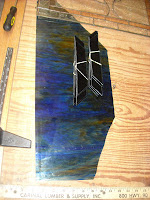 Our students have probably noticed that we've been a constant one week behind the times for a while now.  I'll be posting another update to bring us completely up to date before the week's end.  Look for that soon because the pictures are already edited and ready to go.

* It was just a joke!  We LOVE the Garden Club!

Posted by Bayou Salé GlassWorks at 11:15 AM