I'm excited about this post because Susan's lamp gets to make it's debut and I really think that it turned out wonderfully.  We found out the hard way (after the lamp was started) that 4" square brass lamp caps are no longer made (3 1/2" is as high as they go these days) so we had to improvise a bit to finish the lamp off by using a 4" fence post cap.  It looked great sitting there on the work table but when we went to add it to the lamp it stood far to tall and looked rediculous.  That was when we pulled out the tin snips and trimmed its edges down to a more usable size.  And in the end--  Perfection, as you can see for yourself. 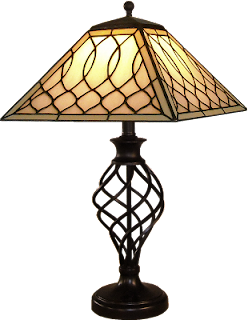 Martha had six of her nine cross windows VERY near completion so I insisted that she finish these off before cutting the backgrounds for her final three.  There was yelling and cursing and even some wrestling on the glass covered floor but I finally got her to see my way.  You should never let a nearly completed window sit for too long as the solder gets harder and harder to clean and color.  After all was said and done Martha had no problems with these but I'm more of a 'safe than sorry' kinda guy.  And seeing how great these look I'm sure that Martha will be more than psyched to get the other three completed! 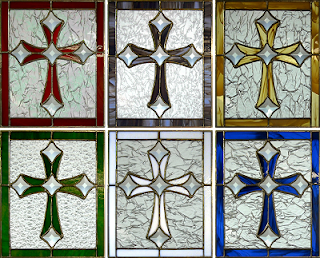 And this week we're pleased to introduce everyone to our newest student, Janet.  She was partial to red and picking the colors for her butterfly was easy enough,  She decided to go with a yellow head because we both agreed that it just flat out looked best (the red head was a bit of overkill).  Janet had no problems whatsoever making this and I have a feeling that we're going to be seeing great things from her. 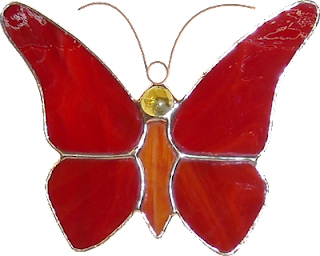 Becky worked on grinding her horse this week and although she was a little concerned about the process when she came in she had things well under control by the time she left .  She's got plans to do a second version of this window only in reverse.  I think she's close to the halfway point on grinding this so she'll most likely start wrapping it soon. 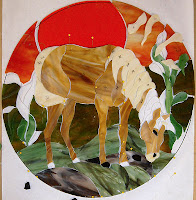 Bonnie's latest FDL is nearly complete-- she's taken it home to solder so it could very  well be completed when you read our update next week.  She also worked on her Cross (which I seem to have forgotten to take a picture of) and I'm confident that piece will be finished so Bonnie may very well have two completed projects upon her return to class. 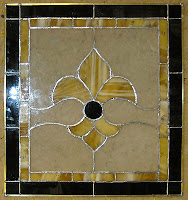 Brenda's making excellent progress on her Beauty And The Beast Rose Window.  With everything all cut and ground she spent the night wrapping glass.  She accomplished a lot and this is another window that I can't wait to see completed.  I used to make windows with fractured backgrounds like this one but I seem to have moved away from them.  Now that I see this I'm reminded at just how good they look and I'll most likely start doing them again.

Next we're going to look at our pair of LSU Windows one after the other.  This first one is Linda L's who managed to tack her pieces together and then contemplate using a single or a double border.  It didn't take long for her to decide that 2 is better than one.  She used a thin yellow inner border and then finish it off with a thicker purple border.  That last purple border just needs to be cut into smaller sections and then this window will be ready for some solder.

Jeanne came in to face the same decision that Linda L did with hers earlier in the day.  Jeanne was unsure of how to go so I showed her Linda's window which then made it easier for Jeanne to decide that the extra work of a second border was well worth the time. Jeanne went with the same thin yellow inner border followed by the larger purple border.

I was thrilled with Mary Grace's progress this week.  After I stressed that she needed to start cutting the line off of her pieces I came back to her project and discovered that her Eagle window has certainly taken flight!  The amazing thing  is that this Eagle window isn't even ground yet.  Mary Grace has two ways she can go with this at this point and she's decided to grind and tack the eagle together so it will essentially be just one piece set into the background.  This will make it far easier to grind and fit into the landscape later on.

Terry has been busy as usual.  She has not just two but three (3!) separate windows that she's been working on and they all look great.  Since she didn't have a beveled cross for the pattern that she liked so much she improvised (something I love to see our students do) by putting 5 bevels into a cross pattern and then redrawing the connecting lines so that it all works out the same.  Terry is also working on an LSU Football window as well as her Flower Window that has everyone's attention.  I'm not sure when Terry sleeps.  LOL

Betty was unable to make it into class this week but both Mary and Linda F came in and continued working on their Nativity Scene Windows.  They're both coming along nicely and I see some foiling in both of their futures.  FYI, Mary's is on the left and Linda's is on the right.  And our newest student, Janet, likes the pattern so much that she's going to start making one next weeks as well!

Just look at Shelley's Beach Window.  She's got it all cut out and has started grinding her glass which is wonderful.  She's making this project look easy and it already looks great even before it's been ground or soldered.  It makes me want to lay out on the beach and just relax...

And bookending things here we'll take a look at Susan's newest window.  It's only been sketched out in pencil so it's very hard to see in the picture but it's an Abita Beer window.  And I must say that there is a LOT going on it it!  But all that work will surely translate into an amazing window and there's no doubt about that!

That's wraps things up here.  Next week we'll resume our basic suncatcher tutorial and check out all of the windows that our students will have completed in the next seven days.  See you all then!

Posted by Bayou Salé GlassWorks at 10:13 AM