We're going to jump right in with our students windows this week and start off with the most colorful one first.  Mary Grace's Geometric Window has pushed her to work much more precisely than she has ever worked before and as you can see by the way things line up in this window, she's got it down!  Nice straight lines and fluid curves make this a window that Mary Grace can be proud of.  And her soldering is becoming smoother and smoother with each project that she makes with us. Brenda's Cross window is accented perfectly by an inner Ribbon Border.  I think that her use of only two colors makes this completed project exude style and class.  Everything is uniform and fits together perfectly (which is very important on a window that is a mirror image of itself).  I'm thrilled with how far Brenda has come and hope she can see just how wonderful her work is. 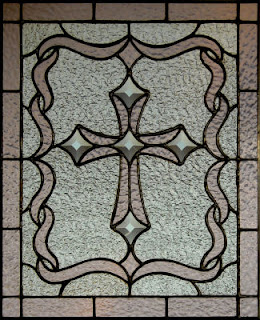 And this is Brenda's second completed window this week.  I guess you can tell that she likes the Ribbon border.  This one was a little easier to deal with since it's a bit larger than her cross window but still a challenge to put together nonetheless.  Of course, Brenda makes it all look easy! 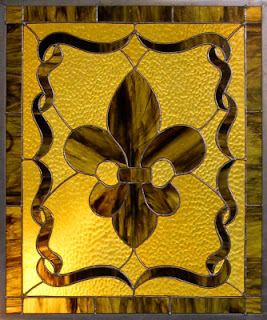 Up next we take a look at Mary's Beveled Cross Window.   I'm starting to see a pattern in Mary's color choices-- she likes clear glass especially as a border choice!  And there is certainly nothing wrong with that as you can see in this window that absolutely sparkles when it's in the sunlight. 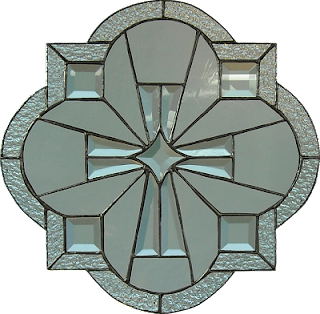 Betty also completed a Beveled Cross Window which is similar to Mary's but with a brown border rounding it off.  It always amazes me how much a persons choice of colors can change the feel of a window and you can easily see that in these 2 windows. 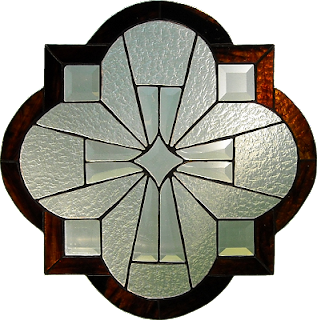 Betty also completed this Modern Nativity Scene which features a triple border.  The extra work on the borders really gives the window a church-like feel which fits the subject matter perfectly.  There isn't a single thing I'd change about this.  Great work Betty! 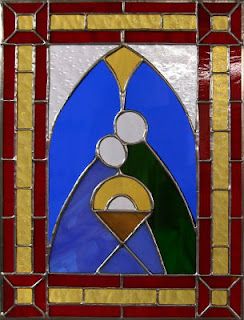 We ran a little late on Jeanne's butterfly last week but she more than made up time this week!  Her butterfly was completed right off the bat and then she moved on to cutting out an LSU window which you'll see further down below.  Her butterfly looks perfect though and I love her choice of colors. 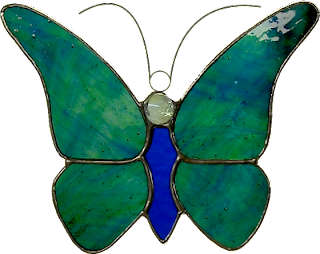 Becky has begun cutting out her Horse window and with just some background pieces cut it's already looking to be every bit as impressive as her last window.  She'll be cutting out the actual horse when she returns and then you'll really get a feel for what this window will look when it's completed. Right now it sort of looks like an Invisible Horse window! 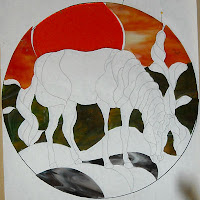 With two windows under her belt this week Brenda has begun working on her newest project-- a Beauty and The Beast Rose Window.  the pattern actually came from a frame in the Disney animated film Beauty And the Beast.  When it gets further along I'll post the still that it was drawn from so you can compare them.  Knowing Brenda this will be spectacular. 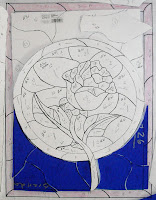 Susan flew the coop again before I could get a picture of the latest section she completed for her panel lamp.  Let's look at her work area and see what it says.  I see the cap of her lamp that has been de-laquered (a simple process involving steel wool and a drop of flux) so it can take solder and then be colored to match the rest of her lamp.  You can even see the test section I soldered just to make sure we wouldn't have any unpleasant surprises when the time comes to actually attach it.  You can also see the pliers and the fine point Sharpie marker that Susan was using as well as the plastic cup she was drinking from and her Abita Abbey Ale beer bottle.  Now before you go passing judgement let me explain that the beer bottle will be incorporated into her next project and it was already empty before she arrived in class with it.  There's no telling if she drank it at home or in the car on the way to class but I do know that she was anxious to use the bathroom when she arrived.  I'm just sayin'.  ;-)

Betty, Linda and Mary are going to drive me crazy while they work on their latest Nativity windows.  Why?  Because they are all doing the same pattern, the same size and (I think) in the same colors.  Figuring out whose is whose is going to be a challenge and I'm sure I'll get something mixed up eventually.  One thing that I am sure of this week is that this first one is Betty's. 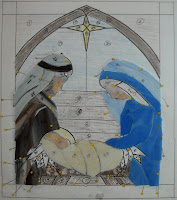 And this second one is, I'm pretty sure, Linda F's. 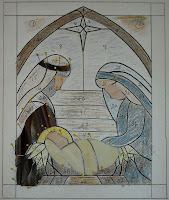 Which leaves this third one which inevitably belongs to Mary.  I'm not sure what to say about these without sounding repetitive so I'll be brief and simply say, 'Nice pattern'! 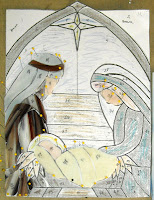 Bonnie began cutting out a new Fleur De Lis Window and with the center FDL now cut and ground the hardest part of this window is complete.  There are just 6 pieces of background left and then the double border and Bonnie will be looking for a new window to make. 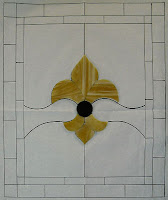 Next we come to our LSU window section.  We're starting with the fancy LSU window that Cindy has been working on at home.  Everything has been cut and I suspect that she'll be soldering this at home along with her Texas Star and Blue Bonnet's window which is all cut out now as well. I'll say this about Cindy-- she wastes no time!  LOL 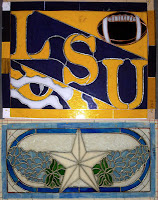 Again we have two identical patterns and color combinations being made by two different students but this time in two different classes.  The first one is being done by Linda L and she's really flying through it.  On her first class she managed to cut out all but the borders and then get more than half of it ground as well!

And when Jeanne said that she wanted to make an LSU window I immediately recommended this pattern to her because of all the text LSU windows, this is the prettiest.  The angled shadow effect gives the window a nice 3D feel and helps ramp up the amount of skill it takes to finish it.  A plain LSU is just too simple a project but this pattern allows more cutting without becoming overwhelming.  Jeanne was willing to call it a night after cutting out her yellow pieces but by the time she left class she had everything but the border cut!  Now that's what I call a productive night!

Ann came in with this cross pattern that she had designed while at home during the week and immediately began cutting class.  There are just 6 pieces of background left to go and Ann will cut them by placing the cross on top of her background glass and tracing around it.  That sounds like something that will easily be completed next week. I'm guessing that Ann will be spending some quality time with the grinder when she returns 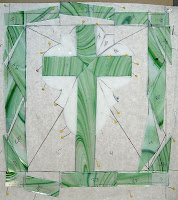 Crosses, crosses everywhere.  Martha has more crosses started that your average church sees in a given week!  These are the first five with their borders cut and ground.  She's taken them home to wrap so these cross windows will begin winding down now.  These are the perfect size for a gift and her color combinations are flawless.  She still has four more to go so we'll be seeing  more of them but I suspect they'll all finish quickly once all the borders are cut and ground. 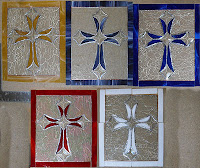 Myrt is back!  She's been having a rough time at home and we were all thrilled to see that she was able to make it back to class this week.  It looks like we might miss her next week but I think she may be able to show up more regularly hereon out.  This is the Ribboned Border Fleur De Lis window that she has been working on and it's all come together spectacularly.  Everything has been cut so she's about ready to wrap up this project. 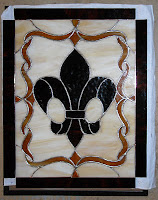 Meanwhile, Terry started grinding this delicate flower window that she cut out while she was at home this past week.  It's a bit of a jumble here in the picture but rest assured that once it's all ground and fitting together nicely you'll see just how beautiful this pattern is.  Fact is that you can already get a feel for it in its un-ground state below.

And lastly we'll take a look at Shelley's Beach scene.  It's all coming together now with the sky, the umbrella, and the sand pails left to cut.  I have no doubt that she'll be grinding this window before you know it.  Shelley's abilities have really picked up and this window shows just how far she's come along.  It's taken her no time at all to cut this out and her pieces are already fitting together nicely.  What a peaceful window this is going to be.

And that about wraps things up here.  We're going to end up with a double post next week as we have a Weekend Workshop scheduled for this coming Saturday and Sunday.  Three students will start and complete a 16" x 20" window all in the space of 2 days.  I love the patterns that they've picked out and can't wait to get that under way.  See you then!