Sticking To The Pattern


Okay, we're back and starting off with part 3 of our basics in stained glass Lesson.  This time we're delving a bit deeper into grinding by bringing up something thta many poeple feel is an unimportant step--Pinning your piece to hold it in place.  (remember to click the pictures to see a larger version)

Our first picture is a quick refresher of where we left off.  All of the pieces need to fit on the pattern so that the back line of the pattern is visible all around the glass.  If it isn't your finished project will grow once you apply the copper foil to your glass.  The picture on the left clearly shows how the black line of the pattern can be seen even when the glass is placed on top of it. 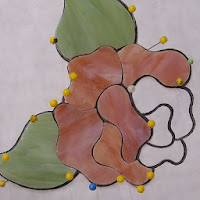 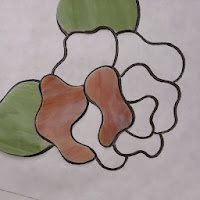 The picture to the right shows how I've anchored all my pieces securely to the pattern using pins.  This isn't an option part of the grinding process.  Without pins your finished pieces can slide making you think that the piece you are currently grinding when it reality it doesn't.


Here is our completed suncatcher all ground and ready for copper foil.  You can cleanly see the black lines around every piece of glass (there may appear to be spots where there isn't visible line but that's only because I couldn't get the camera perfectly centered).  This space provides clearance for the foil without making our project twist out of shape.  If you grind a window and it's locked tightly together before you foil it you're starting off on the wrong foot.  Trust me. 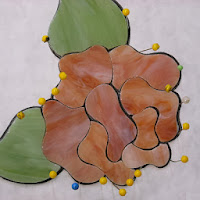 Well with that out of the way let's look at what was completed in our classes this past week.  And in doing that we'll start by taking a look at Bonnie's latest Fleur De Lis Window.  She used a frosted background, kinda-white but kinda-not along with amber and a transparent black for the actual FDL and the borders. 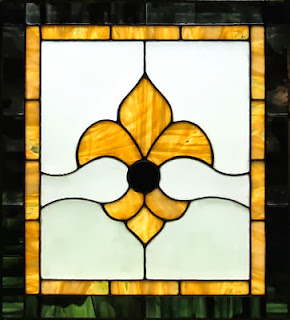 Bonnie also put the finishing touched on her layered Cross Suncatcher.  This design is made with just just 3 different sized strips of green glass and 5 quarter rounds.  A pattern is BARELY required for this which is interesting because even without a pattern the finished piece always look great. 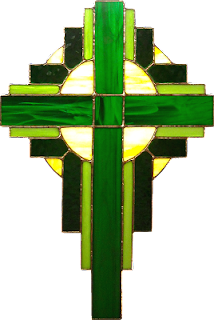 Brenda worked on her Beauty and The Beast Rose Window and had it completed but there were a few broken pieces that we had to knock out so it wasn't completed in time for this post but we'll see it next week for sure.  Meanwhile, let's look at this Flower Window that Brenda made at home.  The only reason she brought it into class was so that I could drill holes in the channel so it could be hung.  Talk about a defining piece!  Her straight lines and beautiful soldering show me that Brenda has definite strengths in this art. 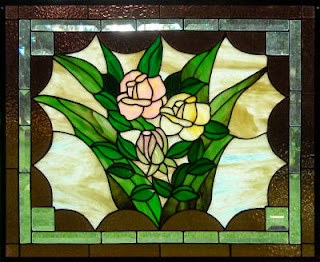 Ann made this Cross Window as a wedding present and she's done a wonderful job.  Like every stained glass artists she sees flaws in her work that she wants to fix the next time she makes this pattern (that she designed) but that is par for the course.   I have never made a window that I've been 100% satisfied with it-- There's always something that the artist sees that no one else ever will and that's the case with this window. 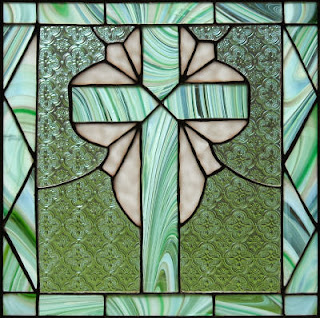 And Ann didn't stop with her cross.  She's also began working on this stained glass Flower Mirror that she's been grinding as she's been cutting.  The left side is pretty much completed so I suspect this won't take too much longer before we see it as a finished project.

I only just noticed that the top part of Becky's Horse Window closely matches Ann's hand mirror.  This week Becky resumed grinding her pieces and when I say 'resumed' I mean 'finished'.  Everything is ready for wrapping and then Becky will tack this together and add her borders.  And those borders won't take long at all meaning that this window is very near completion. 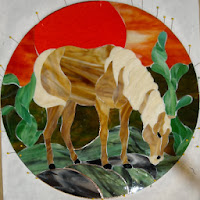 Brenda worked on her latest Beveled Cross which features another Ribbon Border.  As I always say, it's extra work but it's work that is painfully apparent in the final piece.  This one is red and clear granite so it will most certainly light up any room it gets hung in. 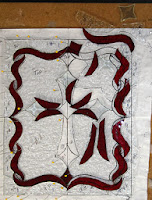 Our newest student, Janet, is moving along quicker than I had expected.  She decided to go with this  Fleur De Lis Window that was inspired by a Peace Lily and she has really made short work of it.  Within her three hours of class time she managed to get this window completely cut!  Janet's next stop will the grinder where I believe she'd do just fine. 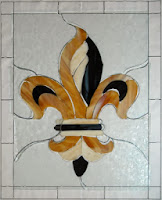 Our next three windows have stopped looking completely identical so I can now tell the differences between them and hopefully know who is making each one.  We'll find out just what I know in a minute.  First up is Betty's version of the Nativity Scene which she just loves.  And how do I know this one is Betty's, you ask?  Well, hers has amber hay under the baby Jesus 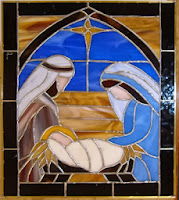 Then we have Linda's version which is almost identical to Betty's save for the color of the hay.  Linda went with a yellow glass that has a slight hint of black running through it (which is hard to see even if you enlarge the picture).  Like Betty's, this window is complete save for the soldering. 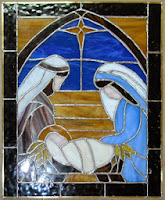 And the last of our Nativity Scene windows belongs to Mary.  Her's is easy to differentiate from the other two because she put Joseph on the right rather than the left.  I'm actually kidding-- what you're looking at is the back of her window so it's reversed.  The big difference between the three of them appears in Mary's window because she decided to use a lighter brown for the border.  There's no right or wrong in the color selection but if you want to know which one I prefer you'll be disappointed to hear that I like both versions equally (almost).  lol 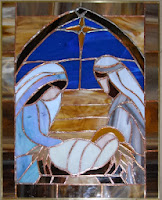 Mary Grace's window has really taken flight.  We talked about what she would do as her next step when she came into class and we both agreed that grinding the eagle would be the way to go.  Once it is ground she can tack it together and then treat it as one piece when she's grinding the rest of this window.  That prevents any pieces from getting lost or mixed up as well as making sure that the window doesn't grow when the foil is applied to everything all at once.  So Mary Grace started grinding and discovered that when you cut the line off of your pieces there isn't much left to grind!  She not only got it completely ground (within an hour) but she also wrapped and tacked all 75 pieces!  The hard part is certainly done and the rest of this will be easy. 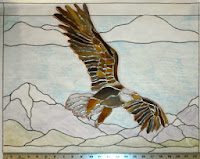 Susan continued fine tuning her Abita Window and I must say that I really like the changes she's made.  The pattern has been heavily penciled in now so there's actually something to see this week.  For some reason I had it in my head that the bottle on the right would be tipped (at 9 degrees for that perfect amount of whimsy!) but Susan straightened it (among other changes) and it looks MUCH better.  Susan should talk to the CEO of YAHOO!

And then there's Terry who had three irons in the fire this week.  She had her blue cross window completed but I didn't get a finished picture of it.  Her LSU window just needs some soldering and she left class with her second (red) Cross window almost completely ground.  It was a quiet night Tuesday with only Terry and Brenda in but it was a fun one even without some of our favorite people being there.

And that wraps things up this week.  With a little luck our Suncatcher tutorial will continue next time around and we'll cover the skill (it's a skill, not an art) of foiling.  The movie of the week is the original version of Death At A Funeral which everyone on Tuesday night has watched and loved as much as Russ and myself.  So until next week, may all your cuts break cleanly!