I Used To Love Top Gun

Ok, it's a fact-- We're way behind here with the Blog but with a vacation an an illness occurring during the past 3 weeks I'm going to ask for forgiveness and then do my best to work on catching up this week.  So without further ado I present what happened during the last week of  October.

Lynn's lamp is officially completed, well, almost...  The spider still hasn't been tacked in place but that's only because it STILL hasn't arrived yet!  Nonetheless, from the outside, this lamp looks exactly as it will when the spider that secures it to its base is attached.  And it looks GREAT, doesn't it?  This is what we call a panel lamp.  There's no mold needed to put it together and the more sides there are to it, the less 'sectioned' it looks.  This design has 12 repeats (a lot for a panel lamp) and the staggered scalloped bottom helps hide the repeats even more.  Beautiful! 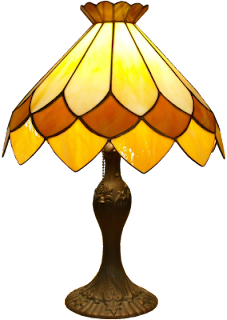 And Shelley finished her Beach Scene Window and it really looks relaxing.  I just got back from a more than a few tropical beaches last week and I must say that Shelley has captured the atmosphere perfectly.  If this had a glass (or two) of Rum Punch and a chair in it I'd say that Shelley took a picture of me during my vacation. 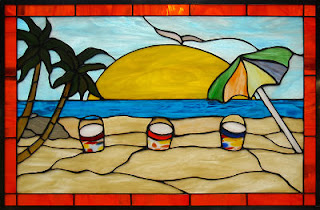 Cindy finished her latest Saints inspired window which is a variation of a window that Terry had made a while back.  The size and colors have been changed and then the text was added at the bottom and this was the result.  Cindy soldered this in one pass and I must say that she's got it! 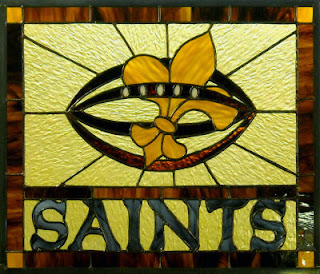 Brenda completed her second Breast Cancer Ribbon window and it's even better than her first one (not that there was anything wrong with that one!)   It's like I always say: Whenever you remake a window it goes much quicker and you have the luxury to change the little things that nagged you about the first one.  And this window is 100 percent flawless. 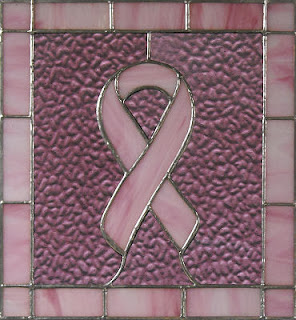 Terry's version of the Stylized Fleur De Lis is complete as well.  It never takes Terry long to finish anything because once she sets her mind to it she remains focused until the patina turns the lead copper!  This is yet another stunning window done in record time! 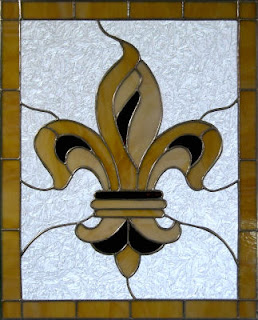 Becky's Ribbon Bordered Fleur De Lis window has really taken shape here.  It's hard to see in the picture but almost all of the background is cut out with only the upper right section remaining.  Becky really strives for perfection in her work and it really shows in her finished projects. 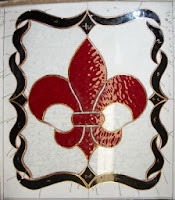 Ann's Stylized Fleur De Lis is moving quickly as well.  With the center FDL all cut ground and ground Ann plans of wrapping this and then cutting the background using the actual glass FDL as a pattern.  She'll be finishing this off with 3 borders so it will look quite different from what we've seen so far. 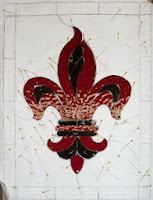 Betty has her Nativity Window almost completed and she's got almost all of her Tiger Claw LSU window cut out as well.  She has a little grinding left to do but the hard part of this window is certainly behind her at this point. Knowing Betty I'll bet we see at least one of these completed next week.

Bonnie's Tiger Claw LSU Window is moving right along.  She has all of her Yellow glass cut and will move along to the purple, black and clear when she comes back in.  I'm so glad to see this design being used again.

Janet has perfected the straight cuts on her Cross window and has her background all cut out this week.  It's even 90 percent of the way ground at this point which means that there are only 16 pieces of glass left to cut and then she'll pretty much have her second project with us completed!  Her border will be the same glass that she used for the cross and it's really going to make this window look very striking. 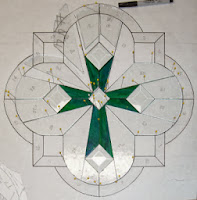 Cindy started working on this round Fleur De Lis Window while she was in class and she has half of the FDL cut and ground already.  Cindy is one of those people who likes to grind as she's cutting and at this stage of the game I see it works wonderfully for her so far be it from me to try to change her mind about how she works.  The proof is in the pudding and Cindy's windows always turn out great! 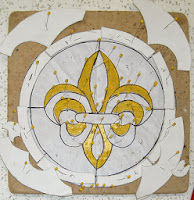 Jeanne has decided to make this Beveled Fleur De Lis Window.  When push comes to shove there won't be a lot of cutting involved in this project because it's filled with bevels but that doesn't mean it won't look beautiful.  in fact, when you see this completed with some light behind it the first word that will come to your mind will be 'elegant'.   Mark my words.  There's just something about clear beveled windows...

Martha has moved from Crosses to Doggies!  With the glass cutting part of this project almost finished Martha will see a quick turn around for this window.  She even has the name section ground and fitted already.  Go ahead and tell me that she isn't making quick work of this! If you do I'll knock your block off! 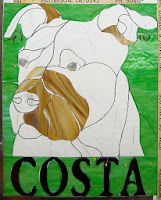 Linda F has been working on her LSU Tiger Claw Window and even though people who have looked at this pattern in the past have told me that they just can't see the Tiger Claws, I beg to differ.  And now that it's cut out and you can see the pattern colored in I don't see how you can possibly mistake the claws for anything else.  Linda's doing a great job and I hope she can see how far along she's come in such a short time.

Mary used to love the movie Top Gun.  I liked it myself.  Now she can't watch it anymore and I have no desire to see it again either.  Is that because of Val Kilmer, Kelly McGillis, or Tom Cruise?   You'll need to ask Mary for the answer top that one.  Meanwhile, she's started this wonderful Angel that I'm never going to see completed because Mary is taking some time off from classes.   She hopes to return at some point but she's broken my heart into a million tiny pieces (like so much broken glass on a hard concrete floor) and I don't know if I'll ever recover.  But she's gone out with a bang because her Angel certainly looks lovely.  We'll miss you Mary!

Myrt's Hot Air Balloons are so close to being completed that it isn't even funny!  With the front side all soldered as well as most of the back side I can safely say that this will be finished when Myrt returns.  She's taken her time with her soldering and although that sounds as though she's slowing down that's far from the truth.  Since this window doesn't need to be re-soldered she's actually saving time.  Expect to see this completed when she returns. 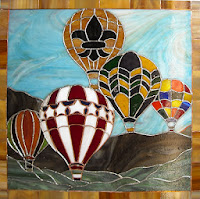 Terry not only finished a window but also worked on this Fleur De Lis while she was in class.  She has the hard part all cut out and has even begun grinding it so I'm going to go out on a limb and say that she'll most likely have it ready for tacking when she comes back in. 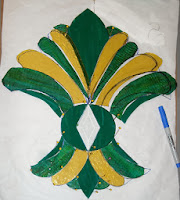 Brenda and Terry both worked on the pattern for Brenda's next window and it's a winner.  In fact, now that I think of it, Cindy had a hand in the design of this car as well.  I can't wait to see the glass work begin when Brenda returns.  I think her husband is going to love it! 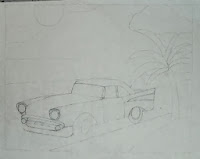 That about wraps up the month of October.  I'll have another post shortly which covers a short week of classes and after that we'll be back to the normal schedule.  I'll see you all shortly.  Thanks for reading!