The Screwdriver Incident (and Other Tales of Woe)

Well, we didn't have lobster Tuesday night but we did have plenty of shrimp!  Tuesday night classes have been known to resemble a high end buffet rather than a stained glass class and the main dish this week was Shrimp Gumbo (and it was G-R-R-REAT!)  We're sorry Martha missed it but we're sure she had fun.  We had our laughs as well but if any readers want to know the Screwdriver story I'm going to plead the 5th.  Perhaps you can try talking to Brenda about it but I'm not sure she'll be able to repeat it without laughing herself into a tizzy!

As for the Blog, this is going to be (as I suspected) a short one since we only had two classes this week.  I was starting to think that we weren't going to have a finished project to unveil, but then Jeanne came through and gave me a completed window so let's start there.

First of all I have to say that Jeanne's soldering is rather amazing, especially when you take into consideration that this is the first real window that she's made with us.  I was MIA with other students while she soldered away by herself  and her work turned out wonderful.  It's a classy design and I love how Jeanne managed to knock this one out so quickly. 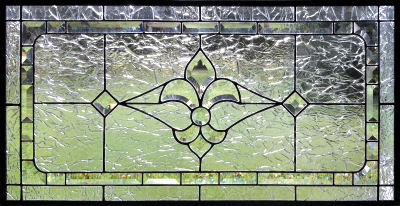 Brenda has all but 9 pieces ground in her 57' Chevy car window that I keep wanting to call Christine.  I suspect this will have some solder on it when it wheels its way back into class next week.  And once it's tacked together Brenda can get a border on it which means that this window is next to finished. 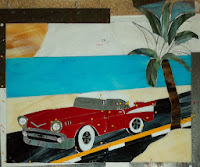 Cindy resumed work on her Stylized Fleur De Lis window and all that it needs is a background at this point.  She ground the FDL as she cut it so she'll most likely wrap this at home.  In fact, I'll be shocked if the centerpiece ISN'T tacked together.  And borders and background are easy enough for Cindy as is the soldering. 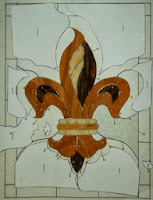 Linda L had her ribbons cut and ground last week and this time around she got them wrapped and tacked together.  Then she cut some clear Granite glass into three 8x5 pieces, laid the Ribbons on top of each piece, traced around them and then cut the Granite to fit each ribbon perfectly.  Once that was done she quickly skimmed each piece, wrapped them, tacked them, and soldered everything together.  By the time class was over her 3 box lids were complete along with the hinges attached to the tops.  When Linda L comes back she'll start working on the bottoms for these.

Here we are, two weeks into Shelley's Fleur De Lis project and all she has left to do is to solder it!  Now that's progress!  Again, I'm so impressed with her abilities.  Shelly has come a long way from her first day in class with us.  She's taken her window home so she can solder it there and then bring it back in for a picture next week.  Next up for Shelley, a tasteful nude. 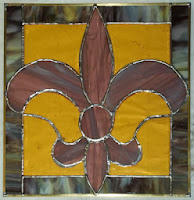 Terry was working on the pattern for this window last week while she was in class but I didn't get a picture of it and then it completely slipped my mind while I was writing the blog.  So now we get to see the horse that she drew from a photograph as it runs splashing through the water .  Terry works quickly which explains why this horse is almost out the stable! 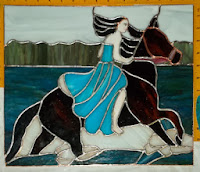 And lastly we take a look at the window that Myrt is about to start.  If it doesn't look familiar then you must be a new reader because Russ' Stylized Fleur De Lis pattern has taken our classes by a storm.  Inside of 2 months we've seen this pattern done multiple times and each time someone sees it completed we have someone else who wants to use the pattern!  Myrt plans on making hers with greens and blues as well as the glass you see sitting on top of the pattern in the picture below. 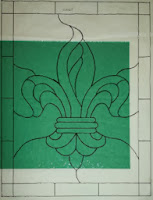 And that's about all we have this week.  I wish all of these posts were as easy to assemble as this one was.  Next week we'll most likely have all of our 18 students show up so if you were disappointed at the brevity of this post be sure to come back in a little over a week to check out what EVERYONE in class is working on.  See you then. 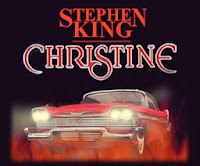