What Does The Fox Say?

We're going to start out with a friendly reminder that Christmas is almost upon us.  We have a few students who have finished or are finishing Christmas projects  and I admire the fact that they didn't wait until the last minute (as I always do).  There's still time to get things out before the 25th but the longer you wait the more risk you take of not getting your project(s) completed.

Okay, so Linda F has completed her Fleur De Lis Window and even though she wasn't able to work on it while she was at home she managed to knock it out in a short time.  I don't know if she can see the progress that she's made with all of her work but I certainly can.   Everything from her cutting to her soldering has improved and you can see the fruits of her labors in this monochromatic window. 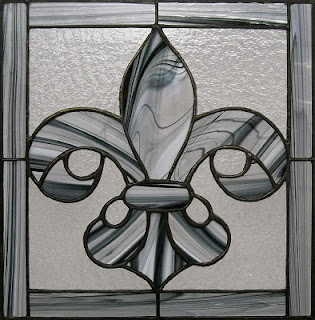 In a similar black and white vein we have Mary's FDL window.  There's actually more differences than similarities between these first two windows but the common border makes them appear to be cut from the same cloth (so to speak).  Beveled FDL's are always the rage here in class and Mary's latest entry into the series shows just why that is. 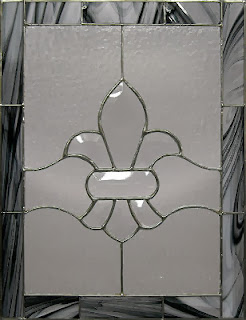 This is Cindy's TCU Logo design and it's officially completed.  Note the nice straight lines and the even flow of solder that surrounds each piece of glass.  Then make sure you look at the long THIN strip of purple glass above the C and the U and marvel at how she managed to solder it so perfectly without cracking it.  Another job well done! 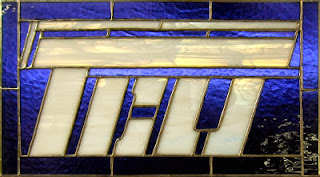 Bonnie has three more Candle holders under her belt this week and to be honest I'm not sure if there are any more that she has to complete.  I think there might be but I'm not altogether sure.  So I guess that what I'm trying to say is that we may see more of these next week but if not then Bonnie will be working on an LSU/Tiger Paw window. 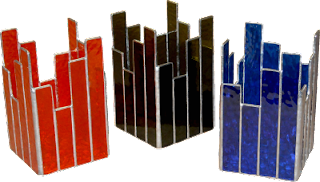 This is Cindy's second completed project this week.  Her original Fairie On The Moon was such a big hit the first time around that she had to make another--and it looks just as good! 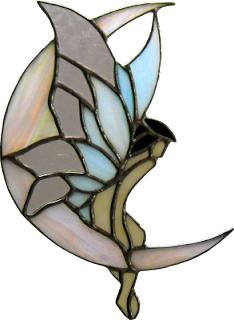 Now, Martha has been a bit worried about her crosses but just look at these final three.  They're perfect!  She wasn't slow in completing these Cross  projects-- she just placed more emphasis on the most  important detail of them-- the quality of the work.  Anyone who gets one of these should be very, very pleased because the workmanship is wonderful.

Cindy not only has completed two projects this week-- she also has this Saint's window just about finished as well.  She began wrapping it in class and the only thing left to be cut (into smaller sections) are the long strips of border glass.  They will be cut down to size once everything has been wrapped in copper foil so we can see if the football section or the letter expand once they're foiled.  No matter how you look at it, this window is just about ready for solder. 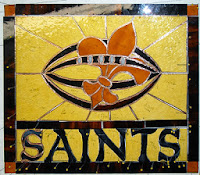 Janet began working on her second project with us this week.  She loved the cross windows that Terry had been making but we were all out of the diamond bevels that Terry had used for the ends of her crosses.  But we weren't going to let something like that stop us, especially when we had tons of 2x2 bevels around the shop.  We did a quick new pattern with a modified cross and what you see below is what we ended up with.  Janet got the 8 pieces of her crosses cut and also learned how to use the pistol grip to cut her straight cuts (which this pattern has plenty of). This is already looking great with only 8 pieces of glass cut! 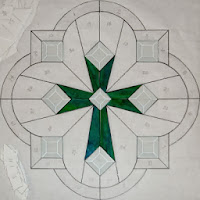 Becky resumed work on her Fleur De Lis window and she learned a few tricks about working with mirror images this week.  For example, her entire ribbon border (16 pieces) was cut with just 5 pattern pieces.  By cutting patterns for just one corner and cutting it twice on each side she's able to ensure a more symmetrical window as well as reduce her workload.  this one looks like it's going to go together quickly for Becky 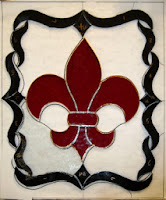 Wow, did Lynn ever impressed me with the soldering she did on her Panel Lamp.  This is her first lamp and also her first 3D project.  Flat windows are tough enough to solder but then when you throw in a 3rd dimension, well, the fun can be hard to find sometimes.  I made a few touch ups but I have got to say that Lynn did a WONDERFUL job on the front of her lamp.   She tells me that she plans on making a second one to match so expect to see another one started shortly. 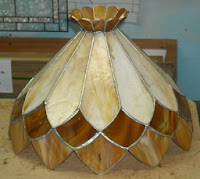 So there we were, all working diligently in class when the door unexpectedly opened and Linda L walked in!  We weren't expecting to see her for a few more weeks but it was great to have her back in class.  She got the final border of her LSU window cut and then the channel went around the edges meaning that all that's left to do now is solder this.  Linda was a bit concerned about soldering but she's doing wonderfully.  She won't be back next week but rumor has it that she'll be returning to her regular spot in 2 weeks-- and possibly be bringing Mary Grace along with her.

Shelly has the front side of her beach window completed and will therefore begin soldering the back side when she returns.  Will she complete it next week?  I think that there's a good chance of  that happening since she's soldering so wonderfully now!  Wait until you see this one lit up (I already have.)

Susan has the background of her Abita window almost completely cut out and all of the intricate grinding that had to be done with the 1/4 inch grinding wheel has been done.  She'll fit the other pieces to these as she continues to work her way through this window which should be much easier now that the hard parts are completed.

And then we have Betty who never works on one project at a time.  I've recently learned her secret-- she doesn't sleep!  This week she has her LSU window all cut out save for the clear background,  and her Nativity scene is tacked together with just a the border to attach, and finally she started cutting out four Atlanta 'A' windows.  She's back on the stained glass horse, that's for sure!

Next we see what Martha has started working on after finishing her last three cross windows.  This is 'Costa' and hopefully you can tell that he's a dog.  He's a little pale right now but next week he'll start to show his true colors as Martha begins cutting glass and placing it on this paper pattern that she traced and cut up during class. 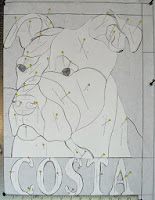 And lastly we take a look at the pattern that Ann started working on this week.  It's the Stylized Fleur De Lis window that Janet made as her first project.  This pattern is really driving the students wild because I know at least 1 other person (Terry) traced it out this week as well.  I forgot to grab a picture of Ann's progress but I can show you the pattern. 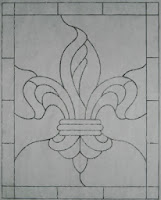 And that about sums it up for this week.  Special thanks to Mary for updating me on the whole Fox thing that seems to be so popular.  This week it's giraffes but I was able to track that fad as 'unrolled'. We'll return again sooner than you might expect so check you email and your Facebook accounts for notifications for our next update which will most likely happen Friday night.