She Can Be Downright Vibrant

This week we had more than a handful of students learn the importance of cutting point to point.  Point to Point is a term we use to for the process of cutting an inside curve.  If a curve cuts into the piece you are saving to MUST connect the two ends of the curve with a straight  cut before attempting to remove the curve.  This simple process will more than triple the odds of your cutting your curve without the piece breaking.  It's a fact.

We have not one but two completed windows by Terry this week and I suspect that her latest Fleur De Lis will be very popular indeed.  Meet Terry's Tiger De Lis.  It stands about 12 inches tall and is so full of attitude that you can just about hear it growl.  Her execution of this design is flawless and the minute I saw it I had a big old smile on my face while thinking What a GREAT idea!  Beautiful! 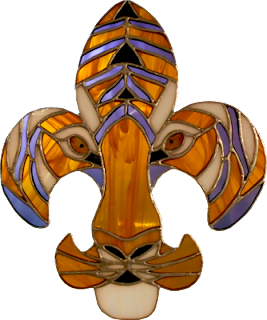 And this is Terry's umpteenth version of the Cross in a square, yet oval-ish, but circular window.  As you can tell from the work, she's got this pattern down!  She also says she may need to make more of these.  It's a good thing she finds them easy to make.  :-) 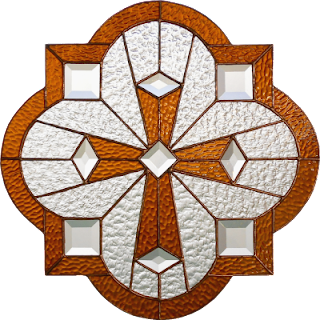 Next up we start looking at projects that are still under construction and we'll start those with Mary Grace's Eagle Window which is ready for tacking.  Once tacked she'll cut three pieces of blue glass to make a lake under the eagle and then affix a border.  I'd say that all of that will all happen when she comes back in next week.  And then the soldering can begin.

Bonnie's Tiger Claw LSU window is  ready for borders.  This week she ground, wrapped and tacked the claws and then added the final strips of clear glass to square out what could be squared (the bottom left and right corners).  The claws cut into the borders on the top and the sides making it a little more difficult to add a border there, but it will only add a few minutes worth of work to the process which makes it barely an issue at all .

Becky was so worried that her window wasn't perfectly square that she was afraid to work on it  between classes.  The amount that it was off was fairly normal for a piece of stained glass so she was easily able to cut and tack the last border in place after we made minor adjustments to the placement of the inner red border.  Now that it's all tacked together it's ready for some brass channel which will make the window perfectly square when it's completed.  And that will be soon. 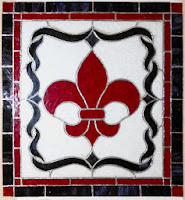 Brenda's '57 Chevy is nearly road ready!  All but the border is cut and ground and Brenda spent her time in class wrapping the majority of what you see here.  She also pondered what she should use for the border that will surround this, and just when things were looking bleak a color appeared that made the border look like part of the window rather than a color that frames it (which is what you want).  And you'll see what that color is when we update again next week. 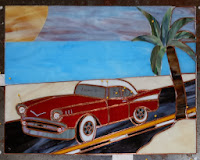 Janet saw Cindy's two Fairy Suncatchers and decided that she needed to make two of her own.  We enlarged the pattern a bit so it's now 12 inches tall and Janet began cutting out the 2 Fairies at once. The only difference between the two of them will be the color of the hair.  With almost all of the cutting completed Janet will surely begin grinding these when she comes back into class. 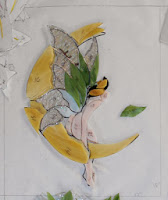 Meanwhile, Jeanne has decided to make three Curved Beveled Crosses.  She's got 2 cut out in a nice red/gold waterglass (which isn't showing its color in the picture) and another cut out in a nice shade of deep colonial blue.  The colors she used are light enough to allow light to pass through but very rich so that the crosses will have a lot of personality when they're hanging in the sunlight. 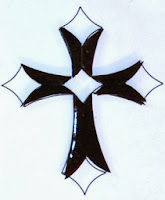 Linda L now has the 3 bottoms constructed for her Pink Ribbon Boxes.  The only thing left to do is solder them (which only consists of putting a bead on twelve 2" lines) and then coloring them.  Once that is done it will be a simple task to attach the box tops to the box bottoms with a piece of hinge.  These will easily be completed next week!

Martha has been on vacation and came in saying that she was sorry that she didn't get to work on her Costa the Dog Window while she was gone.  All I can say is that you should NEVER work on stained glass while you're on vacation!  With just the eyes of the dog left to go this window is really nearing completion.   The borderization of Costa may likely happen next week. 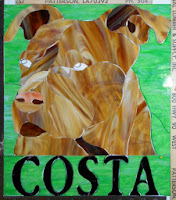 Susan has officially ground all of the background in her Abita Window.  It looks like she'll be filling in all of the missing colors as the weeks progress which means that we'll start to see some color appear in this project.  She has a lot of this cut out already so all she has to do is grind the rest to fit.

Next up we take a look at 3 different versions of Russ' Stylized Fleur De Lis pattern.  First off we see that Ann has just about completed hers.  All three borders are attached and one side has been completely soldered.  We ended up going with zinc channel around this window for extra strength because the triple border increased the size of the pattern so much.  Larger windows need a little more support and zinc channel really does the job.  Look to see this completed when we return in our next update. 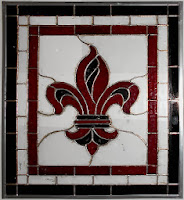 Susie has started her Stylized Fleur De Lis and has made some incredible headway considering that this is her first project with us.  It's hard to see but she has all of her background cut out as well as a good portion of her FDL.  One thing that Susie will be thrilled to learn is how quickly and easily borders can be cut and fitted as well as how straight they can be made with the use of a strip cutter.  and from the looks of things that will be happening very soon for her. 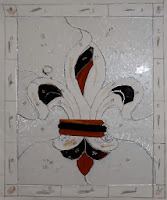 Our last SFDL (Stylized Fleur De Lis) window is being made by Myrt.  We seem to have hit a little bit of a snafu because Myrt has used some of her background glass in the actual FDL itself.  The problem with that is that it will make the FDL appear to have holes in it when it's all put together.  To fix this  she'll either change some of the pieces she's cut or she'll pick a different glass for her background.  Either way is easy enough solution.. 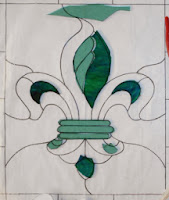 And Terry's Woman On A Horse Window is just about finished.  She didn't care for the look of the hair so she broke it all out and then replaced it giving the woman a new hairstyle in the process.  And since Terry does hair for a living I'm going to say that it's a job well done. 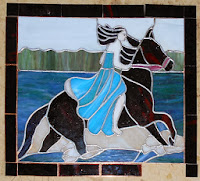 Now let's have a look at Shelley's newest project.  Her nude dancer is standing proudly between the sun and the moon.  It's a bit similar (well, maybe not all that much) to the Mermaid window that she made us us when she first started and I have no doubt that this will look great when it's completed.  As you can see it's looking great already. 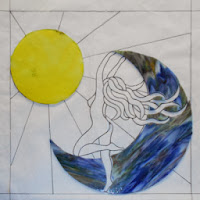 And last, but not least, we have a quick sneak preview of the window that Lynn has begun working on that I forgot to take a picture of.  Since I have no progress to show you the best I can do is give you a peek of the photoshopped merging of 2 ideas that she liked.  This is the merged image that her pattern is based on.  This view will also give you an idea of how some of the patterns that turn up in class start out their life.  Expect a real look at Lynn's window when she returns to class next week. 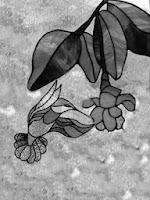 And there you have it.  Our rundown on what happened during the first week of December.  The new year is just about upon us and with Christmas arriving sooner than you think I know we'll see some Christmas gifts completed soon.