It was the week before Christmas
and all through the class,
Students were bustling
to finish their glass.

We have eighteen, yes 18 completed pieces to look at this week with more to follow in our next post.  I say we just dive right in...

Bonnie's Tiger Claw LSU Window is officially finished. Although she rushed through this project you can't tell by looking at it.  Her soldering is a thing of beauty and I only had to add hooks to it and then touched up two run-throughs before I gave it my thumbs up..  All in all I think Bonnie should be very proud at how well she did with this window.  I also think it's safe to say that she has her soldering down pat now. 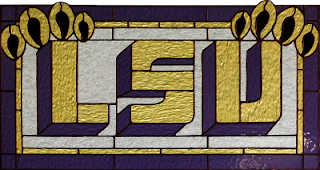 Last week I had no clue what Terry's newest Tiger Fleur De Lis Window was going to look like because all of the glass was cut out and sitting on top of the pattern that I really couldn't see.  But now that it's completed  (that includes the soldering as well) I have to say that it surpasses the Tiger Fleur De Lis  project that she finished just 2 weeks ago.  The attention to detail in this one is amazing (look at those top teeth).  And then she also found the time to make a more traditional Fleur De Lis out of black and golds as well! 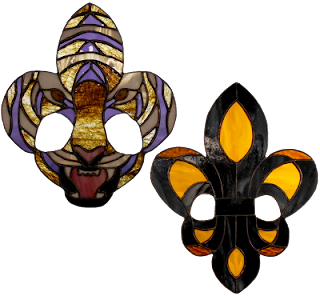 Cindy put the finishing touches on her Stylized Fleur De Lis window before getting down to work on her Texas Star Window.  I knew that this project wasn't going to take Cindy much time at all and was I ever right about that.  She even went so far as to alter the pattern on the fly when one particular piece of glass broke the wrong way.  Making the exact same break on the opposite side and then matching the adjacent piece to the new curve made the 'flaw' (if you can call it that) impossible to detect.  In fact, if you know where it is you'll see that it made the window a bit more complex to do.  But I'll never tell where it is! 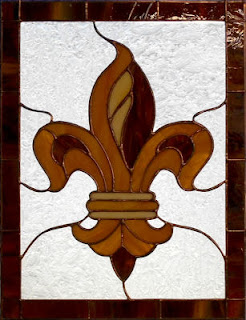 And these two 12 inch Fairies are Janet's latest works.  Started just a scant 2 weeks ago she managed to put the finishing touches on them just in time for Christmas.  She even added a beaded head band to each of them.  I know one thing for sure-- they look great are are going to make two young ladies VERY happy come Christmas day. 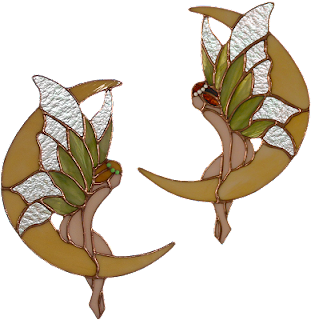 Brenda needed to get her latest FDL completed during class and even with the loss of some class time she managed to walk out the door with it ready to be wrapped up in Christmas wrapping.  I've got to hand it to Brenda, even while rushing to get this finshed on time she managed to turn out a quality piece of glass.   Not content with just getting it done, Brenda made sure that everything fit perfectly and that this Fleur De Lis was perfectly symmetrical. 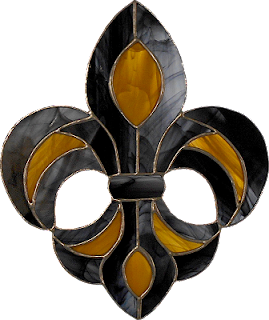 These two Alabama A's were the latest pair made by Betty.  She has a number of these cut out and I'm not entirely sure if she has any left to finish but something is telling me that there's at least one more if not two.  The work on these are wonderful and you'll be seeing another project by Betty later on in the Blog.

Jeanne has two of her three crosses completed which means that there's only one left remaining.  And as luck would have it she's got that third one almost completely soldered and even has a class scheduled before Christmas.  So I'm thinking that any stress she might have been feeling about getting these completed in time for the Holiday can be forgotten about.  Her third cross is  made of a Colonial Blue glass and you'll be seeing that one in our next update. 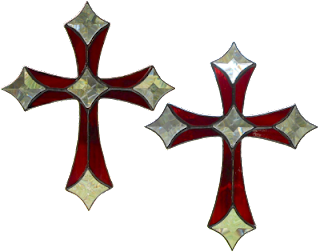 And while were looking at crosses let's look at the larger pink cross that Lina L made this week.  With her Ribbon Boxes all completed she decided to do something quick and simple that would only take a class or two at best.  And she succeeded in making this project look both easy AND beautiful. 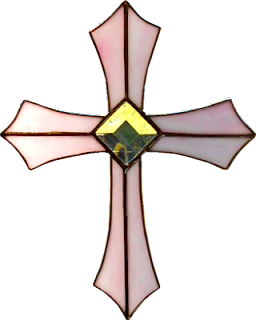 Let's come back to Betty and see what else she's been doing this week,  It certainly looks to me as though her latest Angel is well under way.  With just the border to attach and then a soldering job I'm guessing that she'll have this one knocked out in record time.  Of course, she's made a few of these  already and there's a good chance that she  may not even need a pattern to put one together at this point in time! 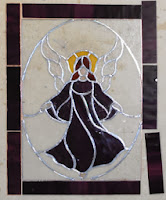 Bonnie also has a second project in the works and it's a Cowboy's Star window.  And she's made some extreme progress on it in only one night.  What you're looking at is the sum of 3 hours work and that's not bad at all!  Trust me when i say that having this cut and halfway ground is no small feat.  And all the points on her star are intact which is the real trick to this design. 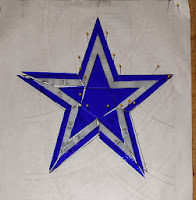 Cindy had a setback or two during her class session but it didn't stop her from completing her Stylized Fleur De Lis Window and getting started on cutting her Texas Star Window.  This won't be difficult at all and Cindy now has two of the seventeen pieces that make up this pattern cut and ground.  It's safe to assume that this window will be a piece of cake for her. 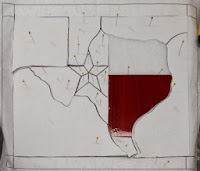 Lynn has a deadline for this Humming Bird and Hanging Fuschia window and I'm stating for the record that she's going to get it on time!  She already has it almost completely tacked together and the front side is already soldered, so the only thing left to do is add 4 small pieces of glass in the border and then attach the brass channel.  Once that's done she'll wash it, color it, and gift it!

Costa the dog is 100% ground now and ready for foil.  I've decided that we're going to tack this together and then adjust the eyes because the picture it was taken from has lopsided eyes.  Your mind rarely doubts the fact that something is correct when it's a photo, but in a stained glass window you sometimes have to take liberties.  I'm just worried that it's going to look odd if we follow the picture exactly so we'll cut the pupils and make sure everything looks good BEFORE Martha grinds the whites of the eyes..

Mary Grace is hoping that she'll have this Eagle Window completed before Christmas gets here and I think that she's going to manage it.  She's got the front completely soldered and at this point in time the back side only needs some solder touch ups.  Once that's done there's just a  quick bath standing before this bird and the long road home.  Look to see this completed in our next update 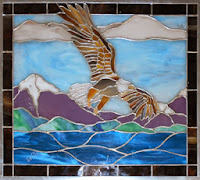 Myrt's Stylized Fleur De Lis Window is really taking shape now.  In the end she's decided to change the color of her background glass rather than re-cut any of the pieces that she's already cut for the FDL itself.  A word to the wise-- You never want to use your background glass for anything else in your window or the main design will appear to have a hole in it.  Luckily, we noticed the double use of color before Myrt actually cut out her background pieces and now things are going to work out just fine. 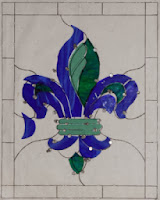 Shelley's Nude Woman looks better than I ever would have imagined.  When she originally suggested going with iridized glass for the hair I was against it.  But then when I saw what she had picked I loved it.  And then, after much consideration, Shelly decided to go with an iridized background glass as well.  And it's perfect.  She's no longer sure of the color of the Sun she cut out though.  She may go with a different color and call it a planet.  That she'll decide once everything is ground when she can get a better feel for what the window looks like. 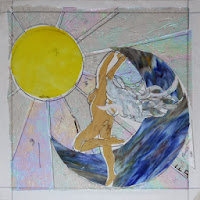 Susan has been making progress grinding the smaller pieces of her Abita window and she's not slowing down in that respect.  I'm thinking that wrapping them along the way wouldn't be a bad idea but we'll have to see what Susan thinks about that idea.   Here's a closeup of her wheat and hops.  It makes me THIRSTY!

Lastly, our newest student, Susie, is moving  right along with her Stylized Fleur De Lis Window.  Not only is it all wrapped and tacked but the front side is completely soldered as well.  That means that she'll be completing this when she comes back into class 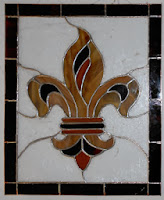 We still have one more set of classes before Christmas and I know of two  window that will certainly be finished by then.  And regular classes will be resuming on Thursday evening so we'll certainly have something to post before the New Year arrives.  So look for one more post before we ring in a new year and the beginning of MANY new projects in 2014.

And in the end, Russ and I would like to wish a VERY merry Christmas to everyone who reads our weekly Blog as well as those who participate by making the windows that you see here each week.  Things wouldn't be the same without you and we want to thank everyone for making our lives so much richer.