BSGW -- Our Projects Are ALWAYS on Time

Well, I've been reading about how UPS and FedEx didn't manage to get all of their packages delivered on time for Christmas, but I'm here to tell you that everything that needed to be completed in our classes went out the door on time.  I originally thought we were going to have only two completed windows this week but instead we have five!  Let's take a look at them.

Lynn's Hummingbird Window looks even better than expected.  The fact that it is all clear glass, save for the subject matter, lends this window a very distinctive look.  And then Lynn went the extra mile and cut her border in curves rather than straight lines.  I also like the use of extra space at the bottom of the window which opened it up nicely. 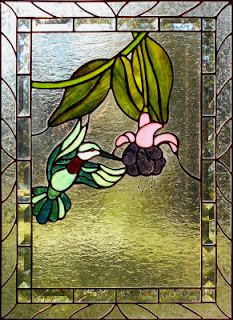 And Mary Grace got her Eagle Window finished!  I know she was giving this to her husband and I just can't see how he couldn't love this window.  Everything about it is perfect right down to the border color.  She could have gone the easy route and cut down the number of pieces in the wings but Mary Grace persevered and got the Eagle itself done in record time.  I think this was a proof of concept project for her because I know that while she was cutting her glass she was resisting cutting off the lines entirely.  But in the end it all went together seamlessly and she was able to mark her time at the grinder in minutes rather than days. 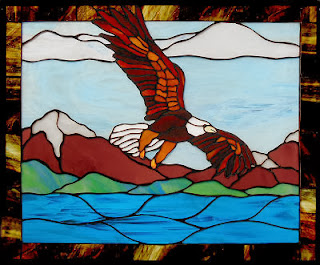 Jeanne's third Beveled Cross was tacked together when she left the week before but she really wanted me to watch her solder it so I could give her some pointers along the way.  In the end there was only one pointer to give her and that was to simply slow down.  Her lead lines turned out beautiful and the finished cross speaks for itself. 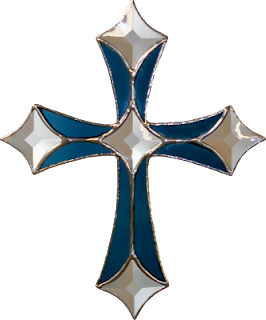 Betty completed 2 windows this week, her first being this Angel that I must say is her best one yet.  She's done this design numerous times now but the color in this one makes it my favorite by far.  I'm going to start recommending this purple waterglass a lot more from here on out!  (And Betty can only make this pattern one more time before the pattern self destructs.) 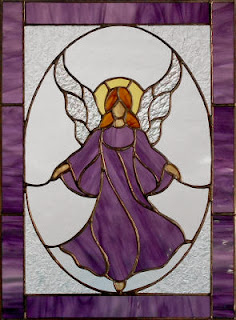 Betty's second completed project is her version of the LSU Tiger Claw window.  This one is slightly smaller than the one that Bonnie completed last week which makes dealing with the tiny pieces a little harder but Betty certainly managed.  All in all, another job well done. 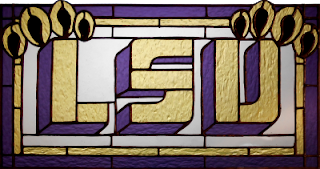 Speaking of Bonnie, she came in and resumed work on her Cowboy Star Window.  It's all ground now and if she manages to find the time she'll wrap it before she comes into class next week.  I'm very impressed with her grinding (and cutting).  Her points are all perfect and that's not easy to do when you're trying to cut glass at extreme angles-- especially if the pieces are thin like these are.  With just the background and a border to go I'd say that this will be done next year sometime. (Which is less than a week away!) 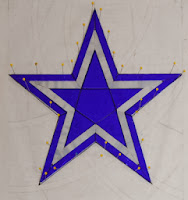 Look!  Another LSU Tiger Claw Window!   This one is the same size that Betty made but it's being made by Linda F.  who has been dealing with some home improvements and has been unable to work at home.  When your house is torn asunder your stained glass projects move a little more slowly but Linda is persevering.  She's wrapping all the pieces that she has cut and ground and that means that all she needs to do is work on the three layers of borders which will be cut on the strip cutter the first week of 2014.  All in all this, like her house, is almost completed.

And lastly we take a look at Becky's newest window.  She's begun work on her Three Lady's in Dresses Window and although it's hard to see, she has picked out the colors for each of the dresses and has all of the flesh cut.  She's making three different versions of this window so she's cutting them all out at once which slows you down at first but then speeds up progress in the end.  And because she's cutting for three the 17 pieces of bare skin have turned into 51 pieces (which she has cut out).  The dresses are all traced out onto her glass so look for some big progress when Becky returns. 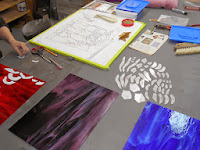 And that makes this what will most likely me the last post of this year2013.  With the New Year falling in the middle of our classes (and on the busiest day) we aren't expecting many students although there are a few expected to show up.   I guess that means that we'll have another update next week, but it will  most likely be smaller than this one.

Everyone have a VERY happy New Year!