This week we had a serious 'tip of the week' posted on the dry erase board in the shop.  Since we tend to write jokes there more than tips I thought I'd repeat our legitimate post here so everyone could see it.  When you're grinding a piece of glass that is supposed to follow a straight line, don't be afraid to draw a guide line with your marker onto the glass to help you with your grinding.  And better yet, use a straight edge to draw the line.  Even the most untrained eye can spot a wobbly line from a mile away.  The hard part is un-wobbling it.  And that's where a straight edge, be it a ruler, a plastic angle, or even the edge of a piece of paper, can come in handy to give your project a professional look.  And while we're at it,  don't forget that curves should flow gracefully without any flat spots or sudden points or peaks.  And lastly, please make sure your circles are round rather than oval.  Here's an example of all of these problems.  Which window looks better to you?  The window on the left or the one on the right? Be sure to click on it to get a better look.
(The correct answer will appear in the last paragraph of this post.) 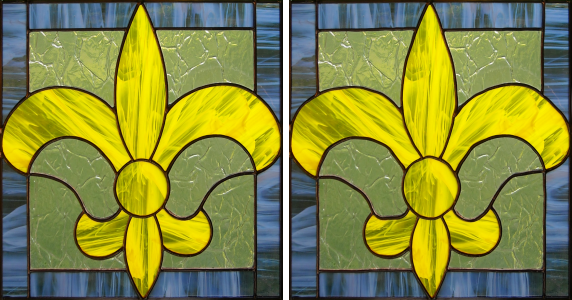 Okay, now let's look at what our students have been doing in the shop.  Brenda and Terry both worked on this window and even though Terry started drawing the pattern on December 31st, this three foot by two foot monster of a window was completed on the 14th of January.   It's hard to get the size of a window to register here on our Blog but look at all those pieces in those roses.  That's only possibly because the window, when standing on the floor, comes up to my waist.  What a lovely, spectacular window this is.  Terry and Brenda have really outdone themselves here! 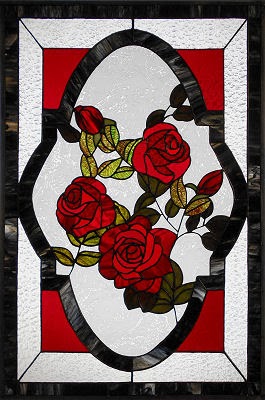 Janet's Saint's Fleur De Lis really turned out to be something special as well.  Note how perfect her curves are and how she's managed to avoid straight sections or points in any of the many curves that make up this window-- especially along the outer edge.  Her finished product is perfectly circular and there's no arguing that fact.  And best of all, Janet seems to have 'come to grips' with her soldering now that she's holding her iron differently.  All I know is that she should be very proud of this project. 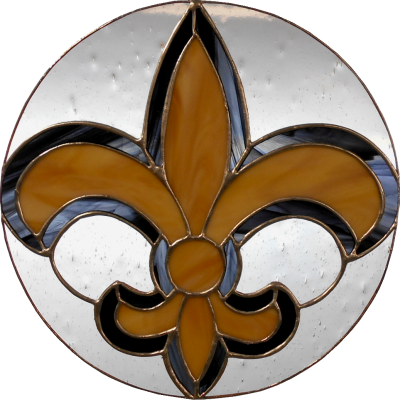 Bonnie's Cowboys Star is, as I expected it to be, a completed window this week.   The background is actually a wispy white glass but no matter how hard I try I just can't get the gray tint out of it in the picture.  I wish I could have taken a photo of this in the sunlight so the colors would look more natural.  No matter, the quality of Bonnie's work certainly shines through, just look at those perfect points! 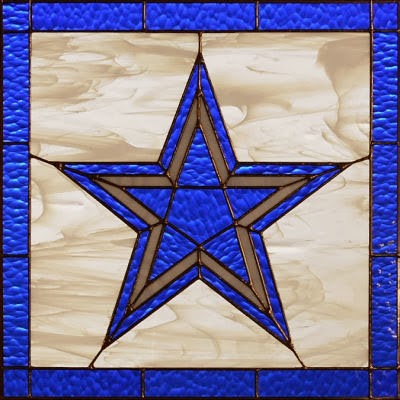 Cindy's Texas Star/Flag is complete as well.  It certainly didn't take her long to make this but you can't tell how quickly it went from the quality of Cindy's work.  Cindy seems to have hit her stride because she's fully confident with each step of the creation process.  And confidence (with a gentle hand) is what making Stained Glass is all about. 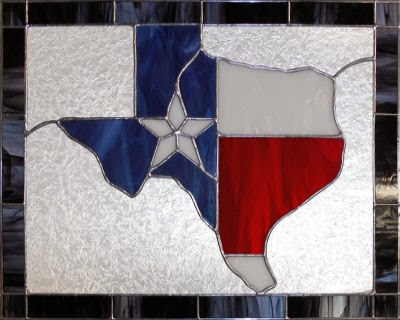 Ann's Fleur De Lis 'L' Window is taking shape quickly.  There are just a few fill in pieces left to cut as well as the four simple background pieces.  This really is a nice looking window and Ann has been grinding it to perfection. 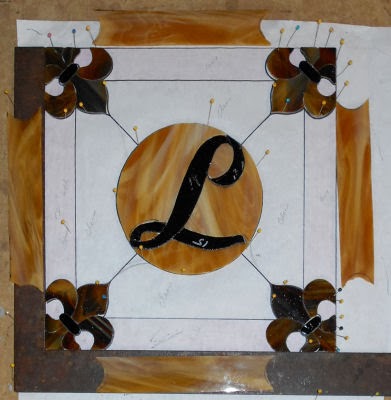 Becky has the first of her Three Ladies Windows all tacked together.  The only thing left to do is put a border on it before she can start soldering.  But before she does that she's going to grind the other two windows and then tack them together as well.  She plans to use a different color for each of the borders and I'm thinking that the border color could possibly match the dress of the center woman in each window.  It might make everything balance nicely, but we'll only know that for sure when we have them all tacked together in front of us. 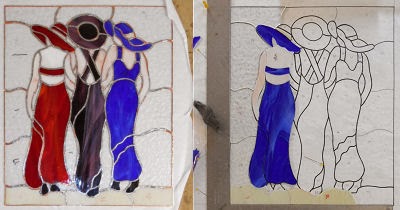 Betty will be soldering her Hot Air Balloon at home and I also suspect that she'll have the lions share of the work on her two Stylized Fleur De Lis windows finished as well.  I believe everything is already traced out onto the glass so she'll be cutting that all out during the next week or two.  Her balloon really looks good doesn't it?  I love the checkerboard top of the balloon-- whoever came up with that idea is a genius! 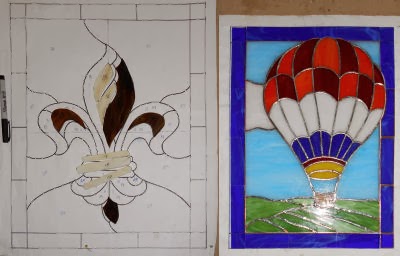 Jeanne has the background cut out for her latest Beveled Fleur De Lis Window which means that this project is very near completed.  I'm not sure of she's going to go with another border around this or not but no matter what she decides I'm sure she'll be soldering this before the end of her next class. beveled windows are always a classy affair and this is certainly no exception. 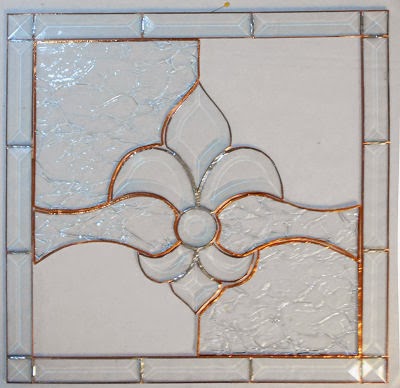 Linda F now has everything cut on her LSU Tiger Claw Window and she's even begun soldering the front side already.  There's no doubt in my mind that this window will be completed when she comes back in and that she'll then begin working on her Mardi Gras Crown window.

Now let's see what Linda L has been up to.  As you can see she has her Rectangular Beveled Fleur De Lis Window very nearly finished.  It's all tacked together and ready for some solder at this point.  We didn't get a channel on it before she left but we'll have that cut for her before she comes back in.  This window needs a larger channel for support so she'll be using a zinc channel on it which will work perfectly since she'll be coloring the lead black when it's completed.

Costa is officially ready for soldering.  Martha has all the glass cut and ground, and his eyes are firmly attached in his head.  We agonized over a color for the border on this and in the end I think Martha's choice was the best one by far.  I'm always partial to darker borders and the lighter ones we looked at for this certainly reinforced my previous belief.  :-)

Mary Grace's Baroque Rosette Fleur De Lis has really taken shape.  Her beveled inner border is tacked together as is her FDL.  There are only 8 small inlay pieces left for Mary Grace to grind and then she'll move onto the final border.  I've forgotten just how nice this pattern is. 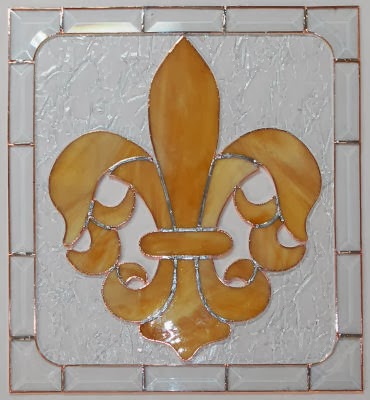 Shelley's Nude Woman Window is all wrapped and tacked together now.  She's got her border picked out (blue baroque glass) and since there are only 20 pieces in the entire border I can't see why Shelley wouldn't be soldering this when she comes back in. 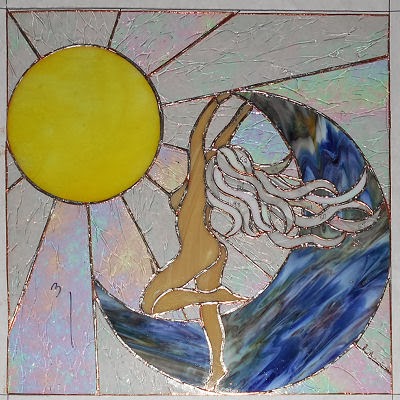 Susan is in the midst of grinding the Hops section of her Abita Window.  So many little pieces and such a large window!  It's a BIG project but she's making steady progress and her work is flawless.  And the amount of detail that these tiny pieces add will make sure that this is one amazing window when it's completed.  That said, Susan's already talking about making a large window with large pieces next.  :-) 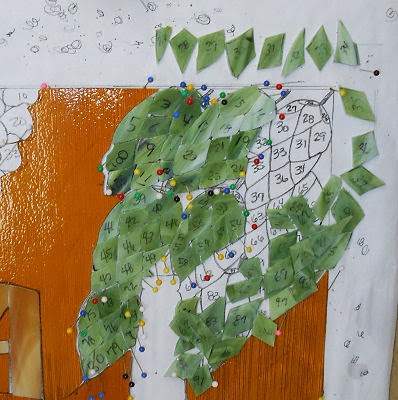 Susie's LSU Tiger Claw Window is moving right along.  With the LSU section all ground and fitting together perfectly she then moved on to cutting out the pair of claws that 'quote' the LSU.  I only have one set in the picture but trust me when I tell you that the left paw has been cut out also.  Once those are ground there are only the 3 sets of borders left to go on this window.

And Terry has begun work on another Fleur De Lis Tiger Head Window,  Even though it isn't even halfway cut out you can easily see what it's going to be even if I hadn't already told you.  This will be the second time Terry makes this window so it should go much faster for her this time around. 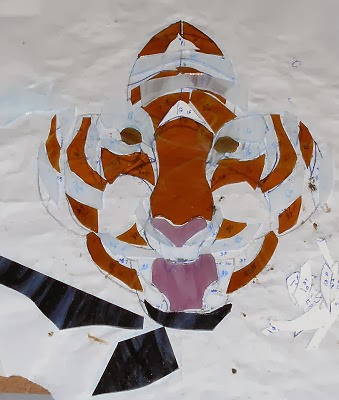 Wrapping things up we'll take a look at the first of two dog windows that Cindy is beginning.  She doesn't have any glass cut yet but she certainly will when we take a look at it again.  Consider this to be a picture to whet your appetite until our next post. 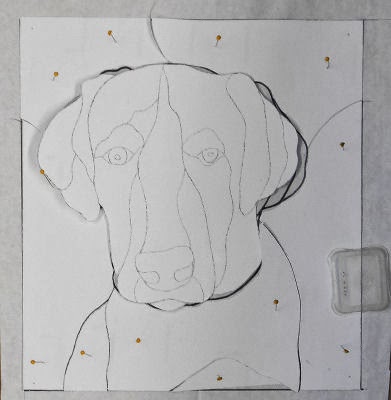 And in ending this I hope that everyone who looked at the first two windows in this update chose the first (left) one over the window on the right.  If you honestly don't see a difference between the two of them and you are a student of ours I can show you some examples in person to show what you are striving for.