The big question this week was one that is easily answered.  When you have a nice cutter with a removable head, what is the correct way to position it?  On newer cutters I've seen a growing trend where it doesn't really matter because the cutting wheel is mounted in the exact center of the head, but on older cutters the wheel is usually offset enough so that there IS a right and wrong way to hold the cutter.  You need to actually see the cutting wheel so you can follow the line you've drawn on the glass accurately.   This means that the screw on the cutter goes up.  I've found that after 30+ years of cutting glass I still follow the 'Screw Up' rule even when it doesn't matter.  Old habits, unlike glass, are hard to break.


We only had  two sets classes this week but numerous students were unable to attended them due to the New Year Arrival.  But less people makes the Blog easier to write.  At first I was concerned that we wouldn't have a completed window to feature but low and behold Susie came through and finished her Stylized Fleur De Lis Window.  She went with a slightly darker color scheme from the one we have in the shop but even Russ agreed that it turned out very nice indeed.  Susie has made stained glass on her own before she started taking classes with us and I have to admit that what she managed to teach herself has come through in spades while making this window.  She says she's learning a lot though, and hopefully that will continue when she begins her LSU Tiger Claw Window next week. 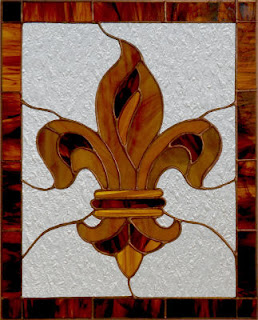 Becky's Three Ladies Window is almost completely cut out now.  And it's not just one window that she's cutting out.  Nope, Becky is making three (3) of them!  The dresses are going to be done in red, blue and purple but she didn't want all of the window to be identical so she cut each dress in three different colors.  Once all of her cutting is completed she'll be able to mix and match them any way she wants without there being any chance of color duplication throughout the windows.  And if you don't understand any of that don't be concerned--it's just my poor explanation for what Becky is doing here.  She's stacking all three windows on top of each other and I've removed two pieces so you can see all of the colors she's using.  Next week you'll most likely see the first trio in their proper 'attire'. 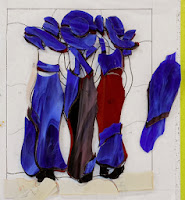 Bonnie's Cowboy's Star is really looking good!  I initially thought it was just a quick and simple Star window but her use of color and her precision cutting has made this more than just a star.  I'll admit that I'm not much of a sports person but I had no doubt as to what this window represented when we held it up. Her colors are impeccable.  Next week Bonnie will attach the border and then begin soldering it. 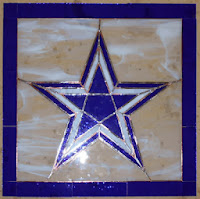 Here's another sports themed window-- this one being made by Janet.  She wanted a Saints style Fleur De Lis about the same size of the Fairy's that she had just completed.  After scaling the most popular Saints Fleur De Lis to twelve inches tall and wide I just enclosed it in a 12 inch circle to make it match the roundness of her Fairy Windows.  With her colors looking great and her cutting being far above average, Janet's managed to already begin grinding.  It looks like this will be finished any night now! 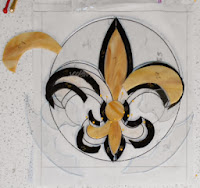 And rounding things out we take a look at Shelley's Nude Woman Window.  It's sorta Modern, kinda Nouveau, and somewhat Abstract, while being completely Astrological at it's core.   I guess it's extensional for lack of a better term. Nonetheless, Shelley has this window completely ground and fitting together wonderfully which means that it's just waiting for a good copper foiling before she can add a border to it.  This is another window that will be completed before you know it. 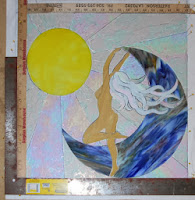 And that's about it this time around.  Next week we'll have all our students back in the shop which means four classes all hustling and bustling.  We'll have plenty to look at because one thing we're not short on is talented students!