And Then There Were Two

Well, it's been a while but I can explain why that is.  First we had our annual Stained Glass Cruise (pictures to follow) which means that we didn't have classes for a week,  and then when we returned we were hit with freezing weather and a lot of closed roads.  Because of that we only had one class that only two students were able to attend.  And that means that this is going to be one short post!

Janet and Susie come in during one of our night classes and luckily for them the temperature took a nice turn upward during the day their class was held.  By the time 6pm rolled around the roads were open and the shop was warm.  And Janet surprised me by having not one but two(!) Cowboy Stars cut out and ground.  When I last saw her she had nothing but a pattern in her hand as she walked out the door.  She was able to cut and grind the two stars and was even going to wrap them but she wanted me to look them over first.  And of course, they were perfect so she started wrapping her glass in class.  When she had the first one foiled she tacked it together and then soldered it as well.  Here is what it looks like (and you can expect the second one to be completed next week). 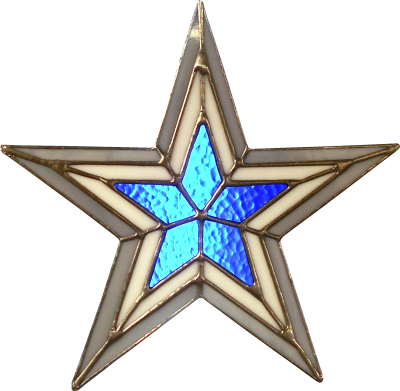 Next, and last of all, we take a look at Susie's LSU Tiger Claw Window.  When we last saw it Susie had the LSU section ground and wrapped with the Claws cut and ready to be ground.  When she came in the claws were ground, wrapped, and ready to be tacked to the LSU section.  Once that was done it was a simple case of adding the borders to her window.  We do those one row at a time which makes lining everything up and keeping things square a lot easier.  By the time Susie left she had it all tacked together.  She's taken it home to solder during the week so I'm really expecting this to be completed when she returns.

And that's all there was to see last week.  It was a small but fun class and both Janet and Susie talked about  about getting rid of Ann and Becky so they can always have all of my attention to themselves!

We'll have another post shortly because this past weekend we had another one of our Weekend Workshops.  Four women came in on Saturday at 9am and by 6pm on Sunday they all left with completed Fleur De Lis Windows.  They didn't spend the night working but they were two long days.  I'll write all about it and give you an update on those windows when we return again sometime before the weekend.

Until then, stay warm and may all your glass break along your scores!