There certainly are a lot of window to look at this week.  We have seven completed windows which added to the uncompleted windows makes for a total of twenty-one projects in the works with 2 others just starting. And next week we're adding another day class into the mix!  Calgon take me away!

Okay, first off  we have Linda L who completed her Beveled Fleur De Lis Window.  Linda is a newer student but her work makes it look as if she's been doing this for years.  I colored her window for her and said that I'd touch up her soldering but I can honestly say that I only touched up 2 lines on the back side of this window.  That means that Linda gets our new Solderer Of The Week Award.  She and her husband will be whisked away by Delta Airlines to Aruba for a week of fun in the sun!  And she can document all the fun with HER NEW DIGITAL IMAGING PACKAGE!  Well, maybe I'm lying about the trip and the digital imaging but she still gets the honor of being the best solderer of the week.  :-) 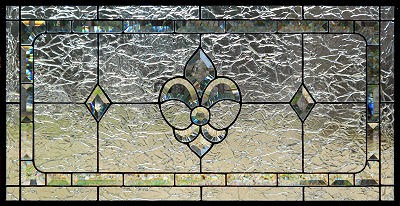 Next we look at our other Linda who has finished her LSU Tiger Claw window.  There's something ever so slightly different about this one from the others but unless I tell you what it is you'll probably never notice (and the difference does NOT make the window 'wrong').  So go ahead and compare Linda F's LSU Window to the one further down that Susie made and see if you can spot the difference.  The first person spotting  the deviation (aside from it's size) will win one hundred dollars!  (I have an abundance of Monopoly Cash I need to get rid of.) 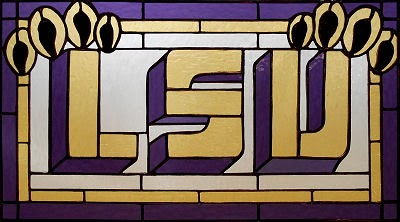 And is it just me or does Costa looks like he's looking for his food bowl?  Martha finished him before she left class but she still needed hooks put on him which allowed me to take a picture with some sunlight behind him rather than fluorescent light.  I'm going to give a shout out to Martha for her soldering (which has greatly improved) and her use of shading on Costa.  He looks great. 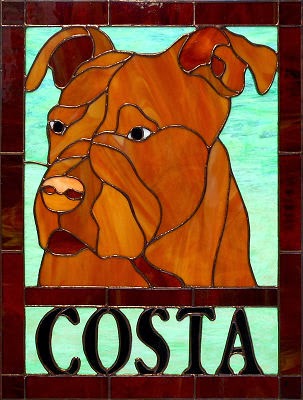 Last weekend we had four of these Stylized Fleur De Lis Windows made,  They were all very similar and I thought I'd seen enough of this design for at least a few weeks but Myrt's take on it is so different that I can't help but love it.  Of course, my favorite color is blue so that doesn't hurt!  Myrt did a stellar job on this window and I think she should be very proud of it. 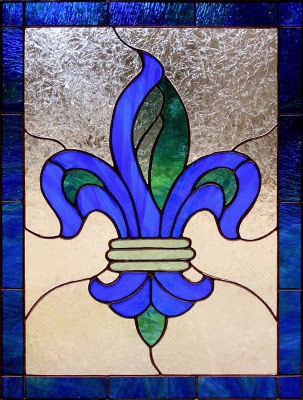 Susie completed her LSU Tiger Claw window and I feel that she's learned a lot while making it.  Excluding borders while making a project is a major part of creating a window that is perfectly square.  Figuring out what you should cut and what you should leave for the Strip Cutter is probably the biggest tip that Susie learned while making this.  Just look at those nice straight lines she has on this window. 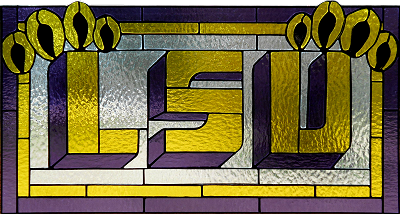 Terry has certainly perfected her Fleur De Tiger that she first drew up last year.  This one, like the others before it, is design perfection (and Terry's workmanship is nothing to sneeze at either).  I wouldn't mind having one of these (hint, hint, hint!) 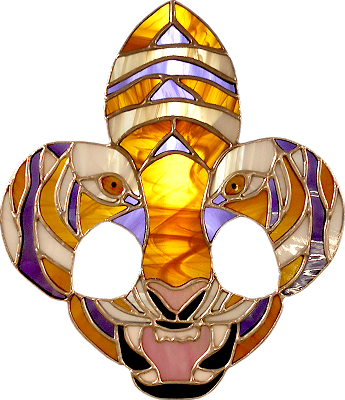 Janet finished her second Cowboys Star Logo and it's even better than her first one.  And I even got to take a picture of this one with some sunlight behind it so the colors look correct in the picture.  Janet is about to start working on 3 transom windows and I think she's really going to enjoy working on them. 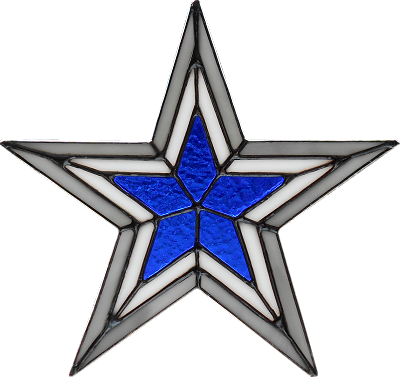 Ann's L window is moving along nicely.  She's going to curve the lines coming out of the points of the four Fleur De Lis' since everything else about this window contains curves.  I think it will be a nice effect and one that we should see realized next week. 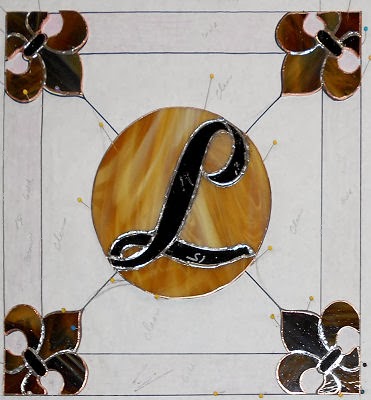 Wow, Becky is really moving along quickly on her three Three Ladies Windows.  And that's not a typo because as you can see in the picture she is working on three separate windows that contain three ladies each.  When she started cutting these she cut each of the three women out of red, purple and blue glass.  Once they were cut she was able to arrange them any way she wanted without repeating the color scheme.  It may sound confusing but even I was able to follow it so it really isn't that perplexing.  Anyway, she's about to add a final clear border to these windows.  Since she already has the front of these soldered we'll be seeing them completed RSN (real soon now).

Brenda has begun working on a Magnolia window and I love the pattern (which I believe Terry drew, but I may be wrong about that 'fact').   She has a good deal of the first magnolia cut out as well as half of the leaves and you can see already that it's fitting together nicely.  This is a perfect example of what happens when you cut the line off as you're cutting your glass.  If you follow that simple rule you get to simply skim your pieces and have everything fit together almost instantly.  Good job, Brenda! 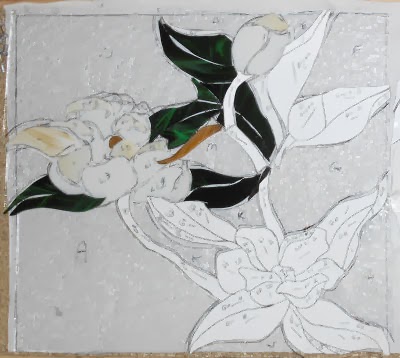 Jeanne has added the final border to her Beveled Fleur De Lis Window and has it halfway wrapped. She's taken her window home with her in case she ends up with some free time during the week so she can finish wrapping it and then possibly start soldering it as well.  This will surely be finished soon  and I know it's going to turn out beautiful. 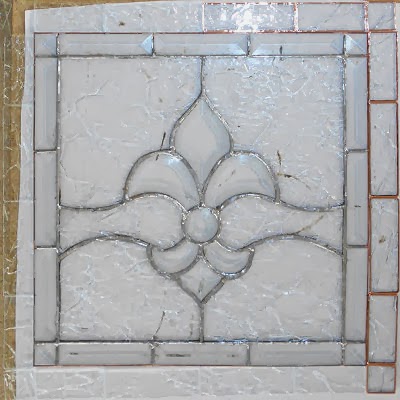 Betty is as busy as can be (what's new?)  and is working on four separate windows:  A Stylized Fleur De Lis, a Hot Air Balloon, a Tiger Claw LSU window, and a Cowboys Star.  The Hot Air Balloon window is pretty much completed save for a bath.  Hopefully she'll bring it back next week so we can see it lit up.  And her Fleur De Lis and LSU are just about ready for solder as well so it won't be long until we see them as featured projects.  I have to say that Betty's soldering on her Hot Air Balloon was pretty close to perfection.  I think she's got it! 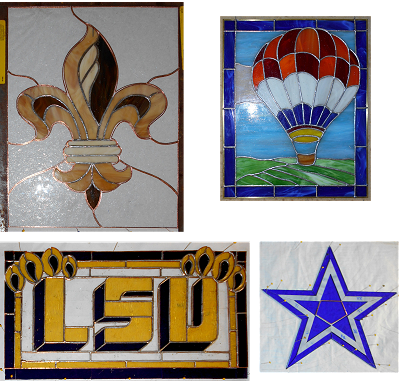 Mary Grace has the final border on her Fleir De Lis Window and has begun soldering it.  There's even a chance that this will be completed when she comes back in. With only the back side left to solder it's certainly possible.  I'm not sure what she plans on working on next but I like the progress that she's made while working on this window. 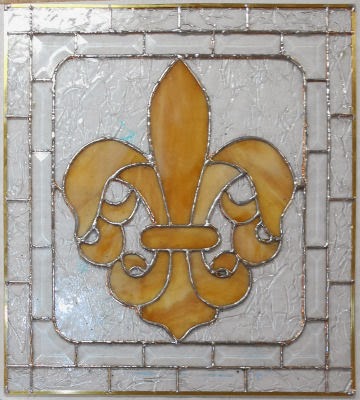 Terry's latest window is already more than halfway completed and she only started it this week!  Of course she's been working on it at home as well as in class but as you can see she won't have much to grind on this because her pieces already fit together nicely.   And again, that is the HUGE benefit of cutting inside the line when you cut your glass-- you only have to skim your pieces and then wrap them 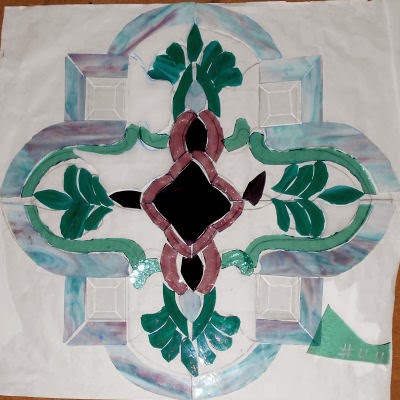 Susan has a lot of her Abita window wrapped now (a lot of the small parts) and is following my advice:  Slow and steady wins the race.  Everything lines up even after she's applied the foil so things are still looking good (not that I expect that to change).  I can't wait until the bottles are in place so I can calm down about this window!  LOL (That ought to make her feel REAL good to hear.) 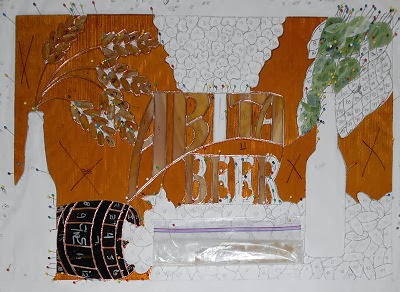 Don't you think this is THE perfect border for Shelley's (nude) Lady with the Sun and Moon Window?  When she said she wasn't sure what she (nude) wanted for a border I knew instantly what I would pick (nude).  And Shelley felt the same (nude) way that I did.  Now that everything (nude) is tacked together Shelly will begin soldering this (nude) project.  I guess it's time for her to start thinking about what she plans on doing next (nude). My, I find this window to be beautiful but (nude) distracting. 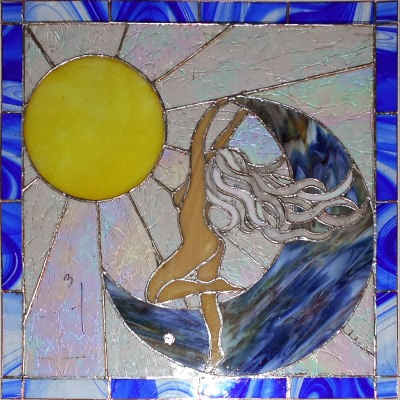 Cindy did some repair work on her Texas State/Star window this week which met with a somewhat unfortunate accident.  But Cindy was able to fix it easily enough and even overcome a second unforeseen obstacle during the repair which she handled like a Pro.  Once that was finished she started working on the first of her Dog windows.  Very much like me, Cindy decided to start with the hardest part first and cut and grind the nose with its deep inset curves.  With that completed the rest should go quickly for her. 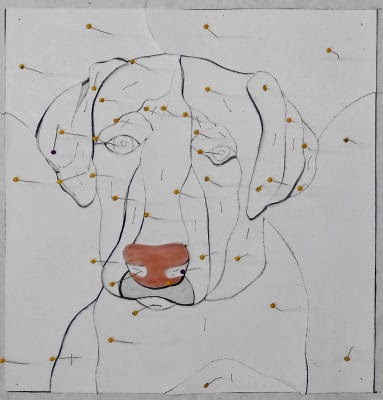 And lastly we look at the window that Linda F is starting.  Although she doesn't have anything cut out yet she does have numerous pieces traced out and onto her glass.  This Mardi Gras crown has a nice feel of femininity about it due to its open design and that's just what Linda was looking for in this window. 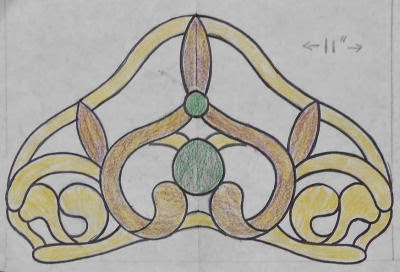 Wow, after a few weeks of having short and easy Blog posts this one has left me exhausted.  And classes start again tonight!  I guess there's truly no rest for the wicked!