The Broccoli Incident: A Nasal Assault

There are two rules that all students ignore for fear of causing problems later on down the road.  Those tough to follow rules are: 1) Cut the line off of your glass when you are cutting and,  2) SLOW DOWN while you are soldering.  Any lines left on your pieces when you've finished cutting need to be ground off before the pieces can possibly fit together.  Then you need to leave room for two pieces of foil between every two pieces of glass.  Never be afraid to cut your pieces 1/8 of an inch short-- it will all balance out in the end.

And ALWAYS move at a snails pace while soldering.  The lead will form a bead all on its own if you just allow it to completely melt.  When your soldering is lumpy and uneven it means that you need to slow down.  That's the only secret to soldering like a pro.  Anyone can do it, but so few do.

Mary Grace came in this week and aggressively re-soldered the front side of her Fleur De Lis Window that she soldered last week.  It wasn't bad, but it wasn't near as good as I knew she could do.  This week she went over it a second time, took her time doing it, and sat in her seat amazed and dumbfounded as this stunning window emerged from mediocrity!   I'll admit that the second side needed some touch-ups when she was finished but that's only because she used very bumpy glass for her background.  All in all I'd say that Mary Grace has got it--  This front side is all her doing and it is MARVELOUS! 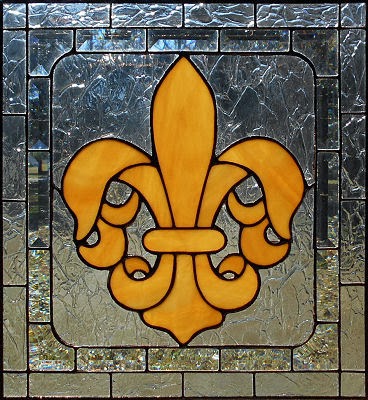 And Terry does it yet again with another design of her own.  She started this last week and completed it this week so she's certainly not slowing down at all.  The conception, the colors, and the workmanship in this window are top notch (as always).  If a picture says a thousand words this one has that many as well as a thousand more.  She's already drawing up her next design and I can't wait to see it. 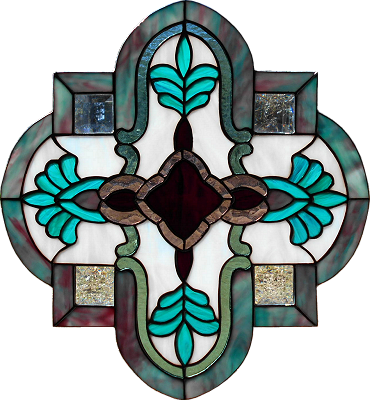 Carol is our newest student and this is the Butterfly she made during her first class with us.  She certainly seems confident and has no problem wielding a glass cutter.  In fact, she had no problems with any of the many steps it took to make this first project.  She has a lot of ideas in mind for future windows and I suspect that it won't be long before they all become reality and we get to post their finished pictures here on the Blog. 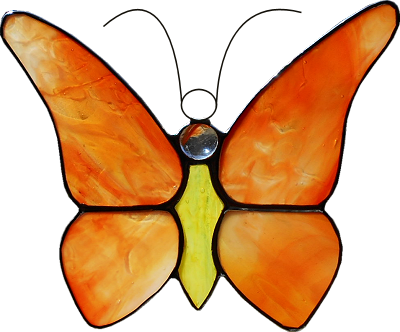 Ann's 'L' window is really looking great.  She only has 8 pieces of glass left to cut and fit into place (inside the 'arms' of the FDL's) before she can start soldering this window and then move on to her next project.   I heard her talking about a big window like the flower window she made last year so I can't wait to see what she decides to do next. 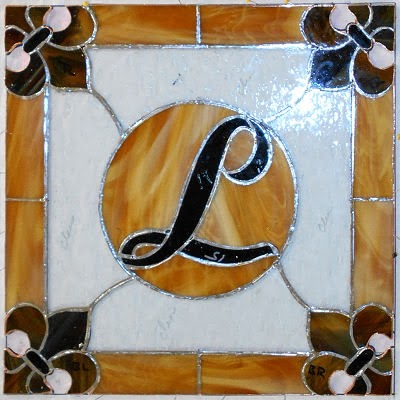 Well, it's official-- Becky has all of the glass cut for her trio of Three Ladies Windows. She came in with the first black border tacked on to all three windows so she just needed to finish them all off with the final clear granite border.  She got those final borders cut, ground and mostly wrapped while she was in class and since she already as the front sides soldered I suspect that it won't be long until we see these ladies walking out the door for the last time.

Last week I somehow managed to skip Bonnie in our weekly rundown of what's happening.  She had started cutting out one of the smaller Tiger Claw LSU windows and this was what she ended the night with two weeks ago.

This week Bonnie resumed where she left off and finished cutting and grinding all of the glass making up the LSU letters as well as the clear background glass.  Then she got them all foiled and cut out her tiger claws.  The hard part is just about over with and next she'll just add borders to flesh it all out ( or should I say 'fur' it all out?)

Brenda's Magnolia Window is really taking shape quickly.  I'd say that more than half of this window is ground and at the end of the night Brenda told me that she hoped to start wrapping it at home during the week.   I suspect this will be done before you know it and that it will be another student favorite.  At this point in time pictures just don't do it justice since there's a lot of clear glass in it so you'll just have to  trust me when I tell you that it's stunning. 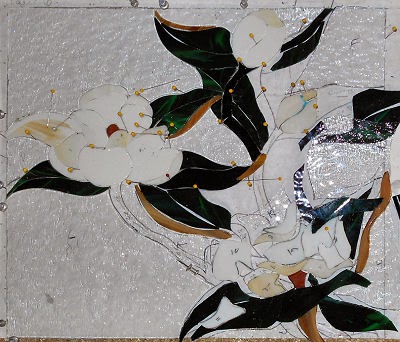 And Beau the dog looks fantastic!  Cindy is working on this window and it's the spitting image of the picture that she brought in.  Even the color is perfectly matched to the real life Beau.  With just a few pieces left to grind and then just four background pieces to cut, Cindy will most likely have this completed faster than a speeding bullet. 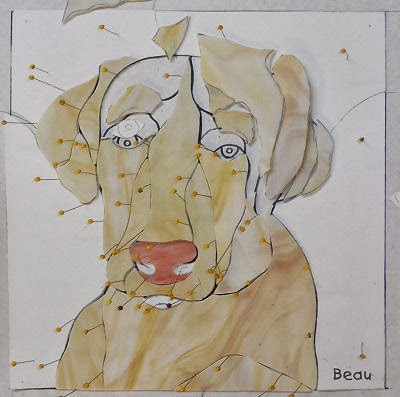 Jeanne should be proud of the soldering that she did on her latest Beveled Fleur De Lis Window.  The front side looks great and although she had a little difficulty getting the second side to flow smoothly she did very well indeed.  And the only reason she had more trouble on the second side is because she used the same bumpy glass that Mary Grace used for her background.  Crinkle glass is very pretty but it can be a pain to solder.  Still, I have no doubt at all that she'll finish this one next week and then move on to her Horse Head window. 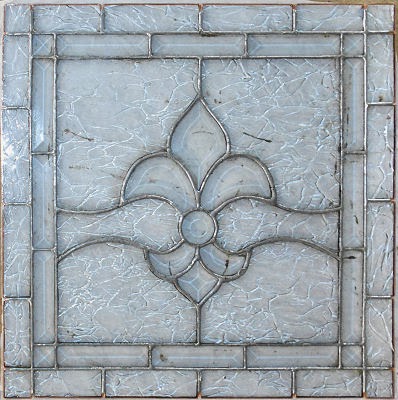 Linda L has started making her very own 'L' window and it's about half the size of the 'L' window that Ann is making.  She's gone with a nice easy pattern and is flying through it quickly.  Although you can't see it Linda has cut the clear glass that surrounds the L and forms the forms the oval.   Linda has taken it home with her to wrap so next week we should see her putting a border on this project. 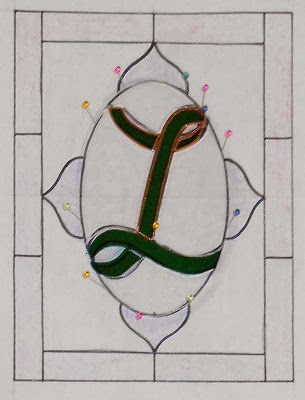 Lynn has the bottom portion of her lamp tacked together now.  She constructed it upside down in a bucket to ensure that it was perfectly round an not oval. (Seriously!)  The spider is in place (the spider is what attaches the lamp to the base) and all it needs now is the crown that sits on top of it and a little solder to seal the deal.  This perfectly matches the lamp she made back in November. 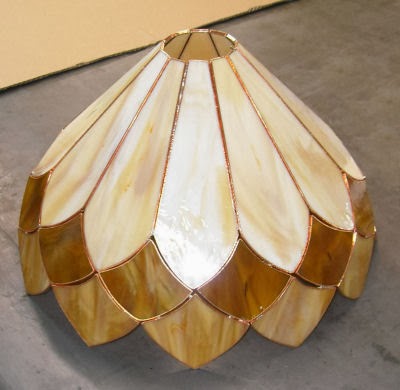 Whoa!  Look at all those pieces!  You can't say that Susan hasn't been keeping busy working on her Abita window.  This week she's even positioned the bottles on top of the pattern so we could get a good feel for the finished project.  There's still a lot of grinding and wrapping left to do and that's the bane of working on a window with a lot of small pieces.  But in the end all that work shows and the window turns out to be spectacular.  Madonna sang it best when she sang, "You'll See!"

This picture of Myrt's Beveled Fleur De Lis Window makes me wonder just what I was thinking.   I had hoped to show Myrt how to cut the straight line through the center of the window while veering off  the straight line and then following the curved FDL.  For some reason I started breaking it from the wrong end of the glass and the cut decided to run straight instead of curving, thus ruining the piece.  For some reason I was thinking that the large piece was ruined but then when I saw this picture I realized that I'd screwed up yet again.  (Hey, I'm only human.)  Only the small curved piece needs to be re-cut, so that ought to make Myrt feel better about having me 'help' her.

And my hat goes off to Martha this week for cutting all of these pieces, grinding them and getting everything to fit so nicely, so quickly.  She only has 16 pieces left to go before she starts cutting her background glass (which will fit inside an inner beveled border).  I'm extremely impressed with her work this week!

Susie started working on her Duck Window while she was at home and she's got a major portion of it cut and ground already.  During class we got the eye cut and ground into place which only took 4 minutes at best to accomplish, but if you don't know how to do it you could be at it all day trying to figure out how to cut a circle of glass smaller than a quarter of an inch round.  With the majority of work done on this window I suspect Susie will complete it in no time. 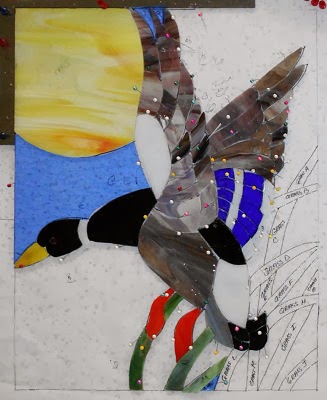 And we'll wrap things up this week with he window that will surely be featured first on the Blog next week-- Shelley's Nude Woman with a Moon and Sun.  She soldered the front side of her window this week and will finish the back side when she returns next week.  When this window is hanging in the sunlight it is going to sparkle like mad due to her use of iridized glass.  Look for that beautiful view when we return... 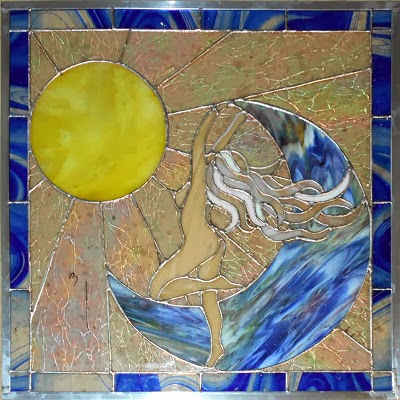 That's about it for this edition of On The Cutting Table.  By now you should know that the fun never ends so join us again next week when the broccoli is fresh, the wine bottle never empties, and the solder all flows smoothly.