There are a lot of things to learn when you start taking stained glass classes.  There's a lot of terminology that's very new to people and one of the things that I've noticed is that a lot of people (students and not) seem to think that the phrase is 'Stain Glass' when it is, in fact, 'Stained Glass'.   I've heard plenty of other Faux Pas which include the following off the top of my head:  It's not 'Flex', it's 'Flux' that you apply to the foil with a brush before you start soldering .  And even though we pronounce the word as 'sodder' it's actually spelled 'Solder'  (and I've seen this mistake made over and over on a dedicated stained glass web page-- Yikes!)  And the last one I can think of is Whisper Glass.  A lot of students love it but it doesn't exist.  It's actually Wispy Glass.  :-)  And BTW, bonus points will NOT be given when someone says one of these terms correctly but I will laugh at you if you continue saying them incorrectly.  :-)

This is Carol's first project with us and let me tell you here and now that she has what it takes to make some stunning stained glass.  From start to finish Carol made making this Stylized Fleur De Lis look easy.  I can't wait for her to start her new project next week! 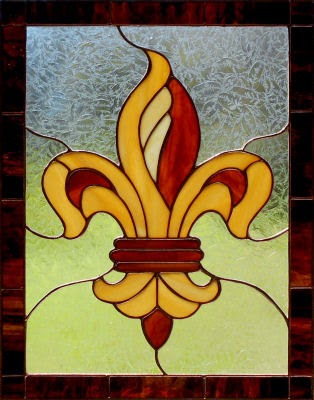 Susie brought in her Shoes Window so I could post a completed picture of it.  She made this 100% on her own and I'm thrilled at how wonderfully she did with the construction of this stylish window.  I may be wrong but I think that's a Manolo Blahnik on top of a Louis Vuitton there on the bottom.  Or do I have them reversed?  (Who says you can't learn anything by watching Sex and the City?) 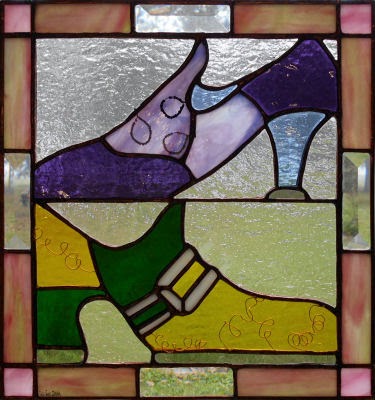 Our newest student's name is Paula and she put together this beautiful Gold Butterfly.  She managed to cut this out easily and efficiently so I can't wait to see what she decides to make for her first window.  Trust me when I say that we'll be seeing more from Paula. 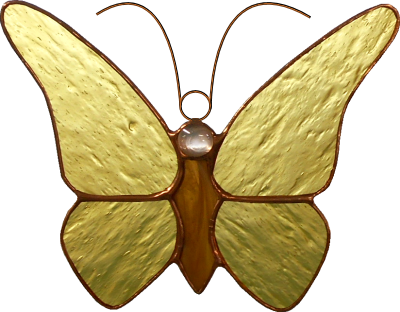 Ann is really flying through her 'J' Window.  All four of her corner Fleur De Lis' are ground and fitted to the pattern, and a lot of the J itself is ground as well.  I think she'll be wrapping glass when she comes back in and then Ann will be ready to cut her background. 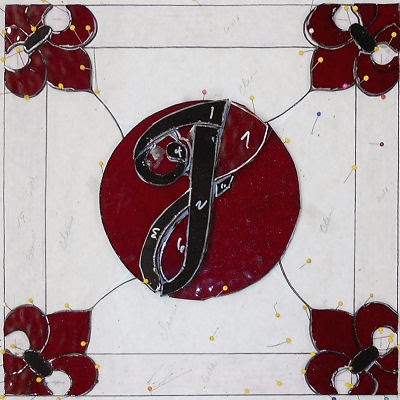 Here's a look at the two Rosebuds that Becky S is working on.  With her second bud ground and wrapped, Becky tacked it together and then worked on cutting and grinding the background glass for both of her buds.  She has her dark green inner border strips cut as well, but as regular readers know, she won't cut those strips into border pieces until the background is firmly tacked into place. 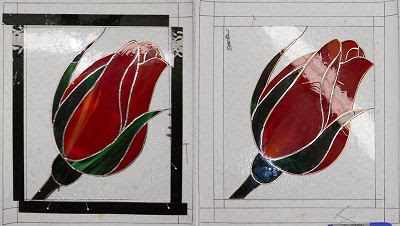 Betty has her Cowboy's Star window just about completed as well as her Stylized Fleur De Lis (which I somehow forgot to take a picture of).  We also get to see all the work she's done on her Lily Window.  With all the glass cut and ground I suspect that her newest window will be seeing the light of day shortly!

Bonnie's LSU Tiger Claw Window is almost completely soldered after she worked on skimming, wrapping, and tacking together her final purple border.  She added a brass channel around the edge for protection and now all she needs to do is complete the soldering job.  There's no doubt that this will be completed next week so expect to see this lit up in our next post. 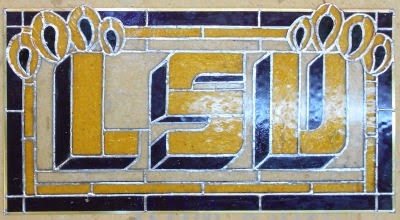 Janet completed the first of her four Transom windows and continued working on her second and third windows.  Both Janet and her husband loved the first one so much that they installed it immediately.  She's promised to send me the picture of the installed window which I was lucky enough to see already and all I can say is that it looks fantastic.  Look for the completed picture next week!

Linda F brought in her LadyBug Suncatcher and it was all ready to be wrapped.  She just wanted me to look it over before she committed to foiling her pieces.  After looking it over all I could say was,'Go for it!'  Linda decided to wrap it at home and instead began working on an oddly named window that she found online.  For some reason it's called a Wreath--  I just don't see that name fitting very well so from here on out we'll be referring to it as Linda's Classic Geometric Window.  And Linda got really far with it as you can see in the picture below. 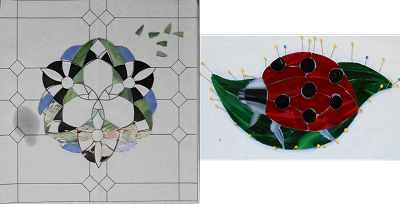 Linda L's two Pink Teddy Bears got their borders applied and then she started soldering this pair.  With these so close to completion I have no doubt that Linda will begin her next window shortly.  (Rumor has it that it will be a Poodle Window.) 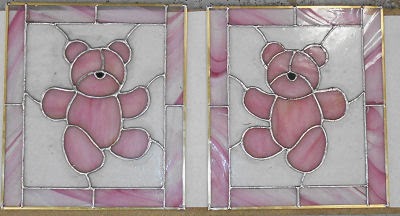 Martha has the front side of her Humming Bird Window completely soldered and I have to say that Martha has officially got the soldering process DOWN!  When I looked at this window at the end of the night I was extremely impressed with the quality of work that Martha accomplished.  She's come a long way from the night she walked in the door and she has a lot to be proud of. 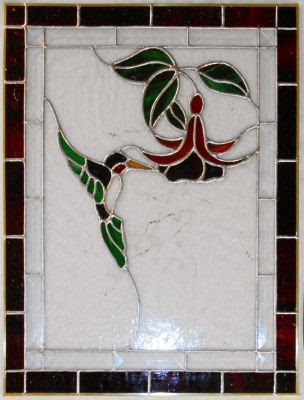 Mary Grace began wrapping her Super Sized Fleur De Lis.  She's still missing a few pieces but after this is wrapped she'll tack it together and get her last four pieces cut.  The finished size of this portion of her window is VERY important because the first border is going to be bevels and we can't alter the size of bevels.  I was impressed with how easily Mary Grace handled the wider foil on this window (she's using quarter inch foil) because most people have a tough time keeping that wider foil even on their pieces. 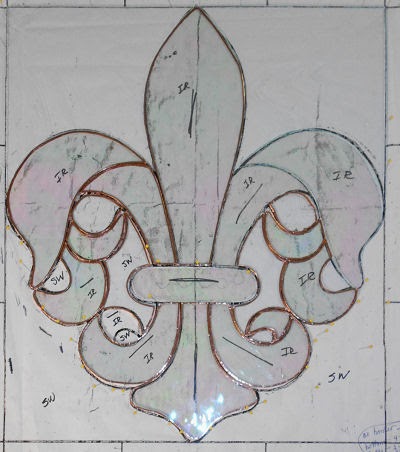 With almost all of her hops wrapped, Susan continued working on her berries.  There are only a few spaces left open and somehow she also managed to get her Pecans in the lower right ground as well!  Susan really got a lot accomplished this week and is considering making windows with no more than 12 pieces in them from here on out.  :-) 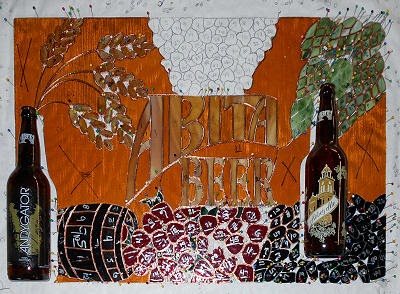 This is Terry's latest pattern.  Her Rose window is stunning and, having just started it last week, she's possibly moving through it faster than any other window I've seen her make.  She's only got the border pieces left to add to this and they're already cut and ground.  And to top it all off, she has the front of it soldered already!  I'm just blown away. 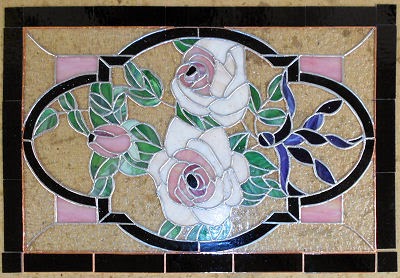 And wrapping things up we move on to Brenda who has her Beveled Fleur de Lis Transom almost completed.  It's tacked together and she's already begun to solder it.  And then, just for good measure she cut and ground the lion's share of her version of Terry's latest Rose Window.  There are a few differences between the Terry's version and Brenda's but I'm far too wise to say that I prefer one over the other.  All I'll say for sure is that the work on both of Brenda's windows is amazing. 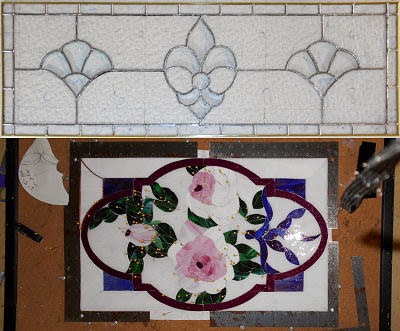 And before I go I will leave you with one last mispronunciation that we always hear.  You slump glass in a 'Kiln' not a 'Kill'.  And that's it for this week! We'll catch you all again at another time.

Posted by Bayou Salé GlassWorks at 9:46 AM