We always have a lot going on in class with so many students bringing in so many projects.  By the time I start sorting through all of the pictures I've taken it can be difficult to identify who's doing what, especially when students are making similar windows.  Lately I've been needing to verify and re-verify the artists of the windows that I post on here each week.  Sometimes I make mistakes and accidentally give the credit to someone else but I promise that if you tell me about it I'll make things right.  It's happened before and I have a feeling that it may happen again.  The mind is the first thing to go, right?  With that out of the way I'll leave you with our tip of the week:  Don't cut yourself on the glass.  :-)

Okay, so Martha has officially completed her Humming Bird and Fuchsia window!  Her border matches the glass used in the bottom section of the fuchsia which is a trick I like to do--  Take a color that was used minimally in a window and then use it as the border color.  It ties everything together perfectly as you can easily see below.  Next up for Martha is an Octagon Iris Window. 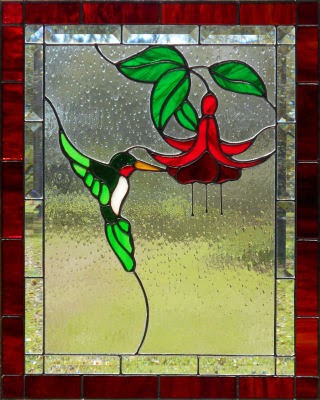 Wow, Terry's Rose Window turned out to be nothing short of amazing.  Everything from the detail of the pattern, to the colors, and the glass textures is spot on. Terry's been working on larger windows at home and bringing them in for photos when they are completed and this is a window that she completed at home.  I can't wait to see what her next big project is. 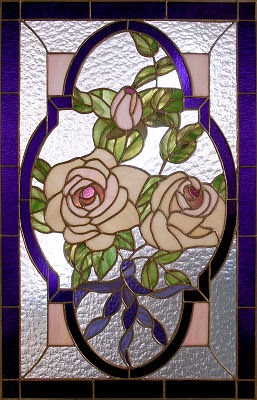 Linda L finished her two Pink Teddy Bears and I think she did a fantastic job.  The mouths were made from 12 gauge electrical wire and applied in two sections.  First the bar coming off the nose was soldered into place and then the curved section was attached to the bar bottom.  I've done plenty of these over the years and those smiles aren't going anywhere!  We also used a Stained Glass Paint Pen to apply the eyes.  I love that instead of making two identical windows Linda decided to make mirror images. It's always a nice touch. 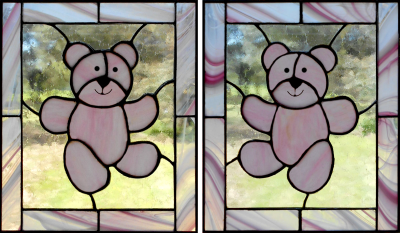 Betty has her Cowboy Window completed and she assures us that she's only making one of these.  Not because of any difficulty but because of her sports loyalty.  So there. 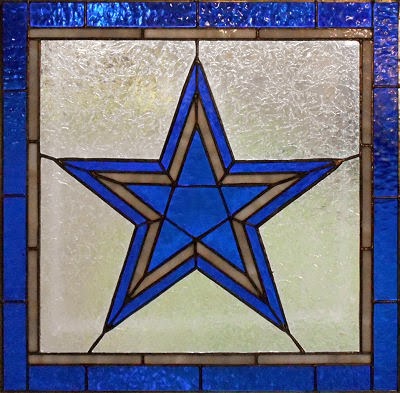 And Bonnie has put the finishing touches on her LSU Tiger Claw Window and it's a looker.  Nice straight lines, perfectly fitting pieces, and smooth lead lines.  You can't do any better than that! 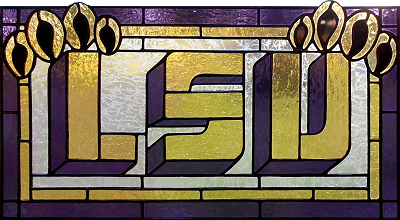 Myrt's completed her Beveled Fleur De Lis and did something a little different with it.  Most people use bevels for the inner border but Myrt wanted just a hint of color and ended up using a beautiful brown/amber that gives the window a completely different look.  I've always liked this window and I really like Myrt's choice to a little color to it. 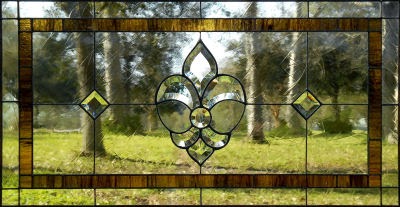 This is the second (of this set) of Betty's Stylized Fleur De Lis Windows.  I'm starting to think that Betty is trying to memorize patterns so she won't need them to cut her glass.  One thing is for sure though, she's certainly got this design down pat! 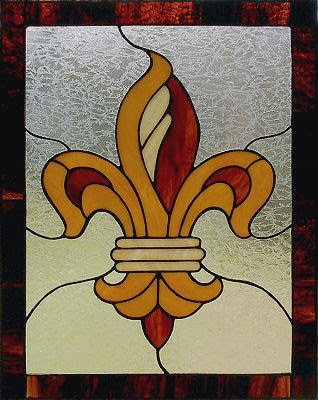 Next we're taking a look at three different projects in the homes that they now reside in.  First up is Brenda's Beveled Fleur De Lis Transom Window which I think suits the room perfectly.  Brenda completed this window at home so we never got a completed picture of it (until now since she sent me this from her cell phone). 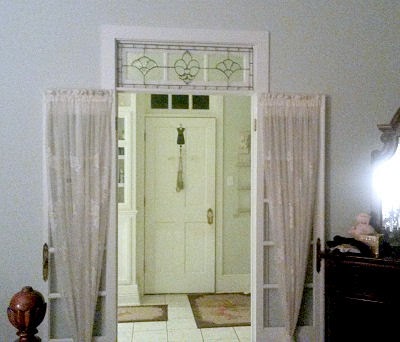 And here's the Fleur De Lis Transom Window that Janet made.  It's the first of four and I have a funny feeling there might be a second one installed before you know it.  This is another cell phone picture that was sent to me. 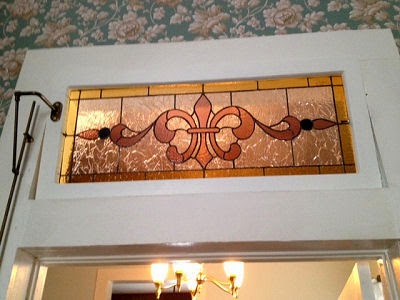 And here's a look at Lynn's two Panel Lamps in her living room.  I have to hand it to her, the bases match as beautifully as the lamp shades themselves.  I'm not sure if Lynn took this picture on a cell phone or not but I found it on her Facebook page and decided that it fits into the blog perfectly this week. 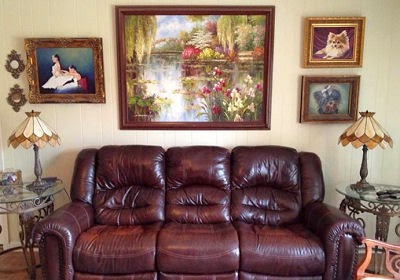 Becky B has all but the background glass cut for her Stylized Fleur De Lillie Window.  I just knew I was going to like the color scheme of this.  Becky's window is a great example of how colors can really change the look and feel of a window.  But most of all, I love how Becky B took a pattern and made it all her own my using a completely new palette. 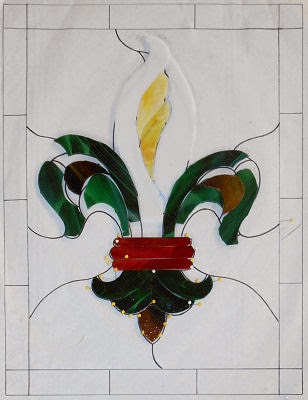 Becky S now has both borders cut for one of her Rosebud Windows and the second Rosebud has its background all cut and ground into place.  That means that she's only got two borders to go (and her strips are already cut ).   Once her background is tacked to the Rosebud she'll be adding her borders and soldering (although she's been soldering the front side as as she's been going along to help save time).

Bonnie got a quick lesson on using the strip cutter this week and then set about making two Candle Holders.  This is one side of the Amber Candle Holder that she's working on.  All four sides are cut and ground and she's taken them home to wrap during the week.  Alas, the second one isn't started yet because we didn't have the glass she was looking for (she's matching one that she already made).  I think we'll see this completed next week. This is Brenda's version of the Rose window that you saw Terry complete up above.  The patterns are VERY similar but with subtle differences.  The colors are completely different though, and I can't wait to see what this looks like when it is lit from behind.  The only way you can get a good feel for a window is to see it lit up but I have no doubts about this project.

Carol started her second project with us this week and if you don't recognize the pattern then I hate to have to be the one to break it to you but you've had a horrible childhood.  Winnie the Pooh looks great and Carol's work is top notch already.   I can't believe how far she's gotten along with this in one short day. 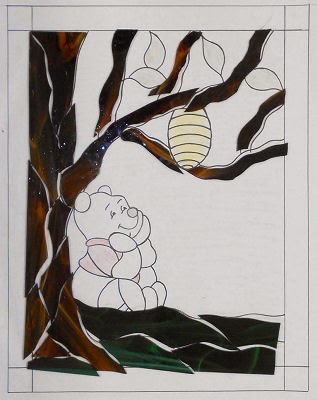 Just look at the coloring in Cindy's Dog Window (which we will now be referring to as Bentley).  The shading of the fur and the look in his eyes make this window a standout and it isn't even finished yet!  Cindy will begin adding the name to the bottom when she comes back in and then she'll decide on a color for the borders of both her Dog windows. 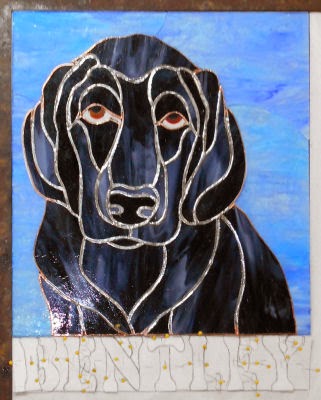 Janet cut out even more of her third Fleur De Lis Window and added the border to her second window.  With the border all cut, ground, wrapped and tacked I have a feeling that she'll be soldering this while she's at home.  And her forth window will see the light of day quicker that ever at this rate. 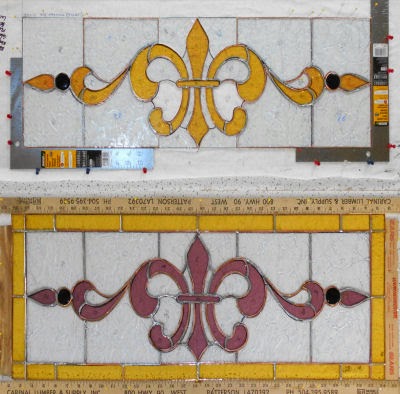 Ann has got all the pieces she's cut and ground tacked together on her 'J' Window which means that she's just twelve scant pieces away from finishing the cutting on this project.  When she comes back in she'll start with the four pieces that make up the background and once they're tacked together she'll cut and fit the final border. 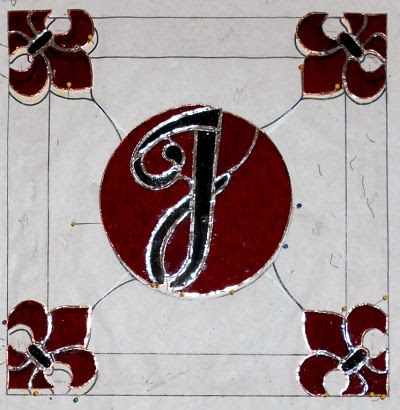 Look at all those pieces across the bottom of this Abita Window.  I don't want to jinx anything so I won't mention dropping this and having pieces all over the floor.  Oops!  I think we're getting to the point where we want to tack some of this together, just for safeties sake.  I'd hate to see Susan cry!

Jeannette started work on her 16 x 20 Cross Window.  It's the same design that Martha has worked on in the past, just done on a grander scale.  Jeannette has this almost completely cut out (just four background pieces left to go) so she'll be completing this window real soon now.  But we're going to see another of these started next week when her friend, Rowena, comes into class and begins working on the same window in different colors. 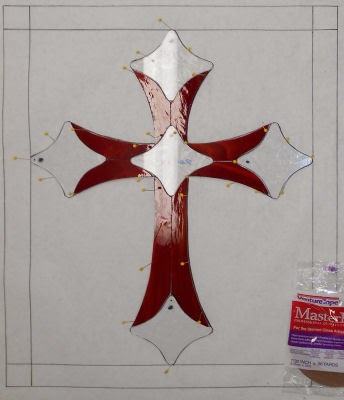 Shelly has her Bird and Flower Window really close to being all cut out.  The only think that stopped her from finishing her cutting was that she ran out of the glass she's using for her background.  We have the glass ordered but it won't be here until the following week so Shelley's going to begin another project that she ALMOST dropped this one for last week.  That means that we'll see something new for Shelley next week, but this one will return shortly.

Dashing through the snow, in a one-horse, open sleigh!  Yes, with Christmas almost upon us I can say that Linda F's window is really bringing out the Holiday cheer in me.  Wait, you mean it ISN'T Christmas?  Come to think of it, this doesn't remind me of Christmas at all and we still can't figure out why it's called a Holiday Christmas Wreath Pattern.  However, as a non-seasonal design it's beautiful and Linda F is making great progress with it.  I love how she's stayed away from the standard Christmas red and and green combination.  :-) Mary Grace has all of her window cut and tacked together save for one small spot.  The horizontal band of her Fleur De Lis ended up being a little short she we've decided that it would be best to re-cut it.  But that won't take any time at all to fix and then she'll add a beveled border to it and then follow it up with one more clear baroque border.  I see soldering in Mary Graces future! 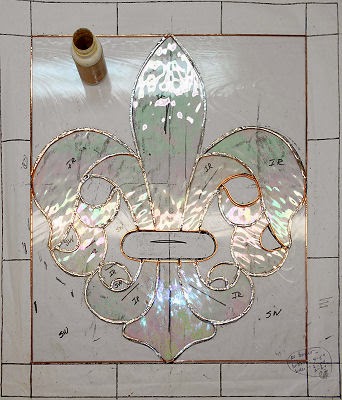 Next up we take a look at the pattern that Jeanne traced out and picked colors for as well.  She has her Horse Head all tacked together (I forgot to snap a picture before she left) but she can't settle on a color for the corners of  it so she's moving along to this project until the right color strikes her fancy for the horse.  This one looks like it should certainly keep her busy, but it's a repeating pattern so it won't be nearly as difficult as you might think.  I have a feeling we'll see some glass cut for this when she returns. 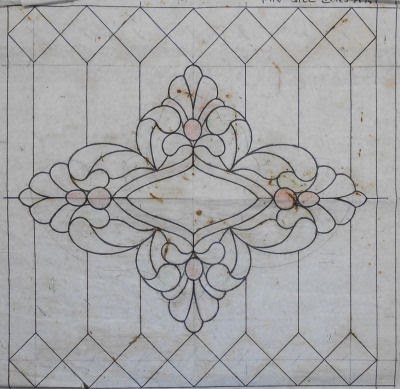 And lastly we look at the project that Terry is making in class this week-- another cut class vase, but this time cut in blue.  She's using three different glasses that are the same color but with different textures so when this lights up you'll see surface differences rather than color.  I like how she's thinking with this, it's a very artistic way to make her window stand out without relying on desperate colors.  This is another window that I can't wait to see lit up. 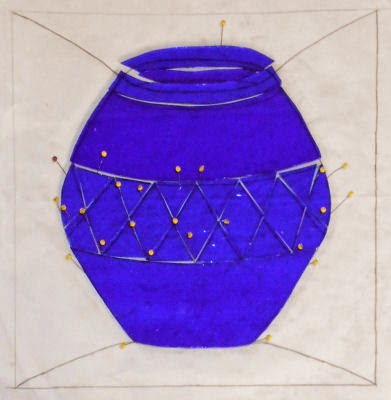 In closing I'm going to tell you that we have a new student starting next week but since she's already taken a weekend workshop with us we aren't going to  have her make a butterfly.  Instead, she'll be starting on a large Cross Window so expect to see that and a whole lot of other things when we return.