Well, it's been an interesting week.  We ended up cancelling all of our Wednesday classes due to Russ being in the hospital from Monday until Thursday due to an infection in what was most likely a spider bite.  I was still able to have classes on Tuesday evening and all day Thursday so there's still a lot to cover.  Russ is feeling much better and his hand looks good now with the swelling reduced to just his wrist area.  Let's hope this doesn't happen again though!

Okay, so much for Cindy taking her time on a window.  Here's a look at her Texas A&M Window after she completed it.  When she brought it in all it needed was a zinc channel and a good cleaning (she left the lead silver on it).  I think I finally have the lighting situation under control in the shop so we can get decent pictures during the night classes when there isn't any natural sunlight coming in the windows.  Cindy did some really quick work on her window but the quality of her work didn't suffer at all. 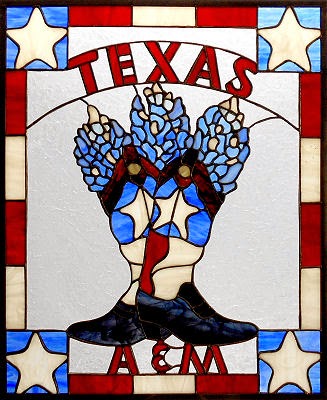 And this is the Feather Window that Cindy also completed.  This one just needed two hooks and she was all set.  It's colorful, most certainly 'Indianesque', and exactly what the customer requested. 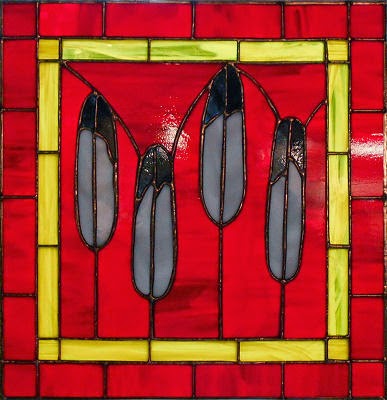 Our last completed project of the week is Janet's Multicolored Cross.  She's made this pattern before so she's a pro at it now, especially since she did such a great job beading her edges of this cross.  Slow and steady wins the race and that's exactly what Janet did with this Cross. 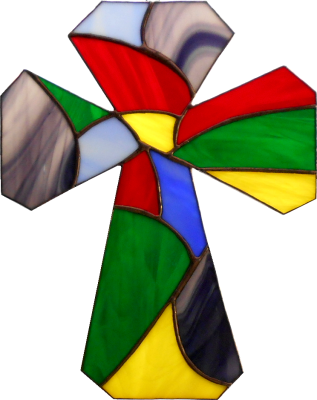 Becky B really did some excellent work this past week when she cut out the mountains and the horse portions of her window.  The mountains were an exercise in learning how grain lines flow and how to line pattern pieces up according to the grain on the sheet of glass that you're cutting from.  Becky persevered and now her mountains have continuity and depth. 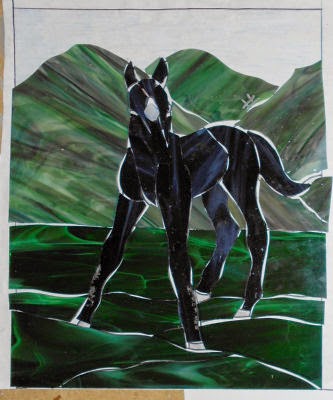 Poor Martha!  She told me (through a text message) that she wasn't happy with her lettering and I have to say that I suspected that she was over reacting.  Then I saw what she had accomplished and I knew I was correct.  The lettering that she did looked MUCH better than the lettering I had done on her first Louisiana State Police Window.  It took everyone in the class to make her understand that she'd done an incredible job and that she shouldn't start over from scratch but simply redo the letters she had scraped off.  And then she dropped and subsequently broke the piece that said TROOPER.  :-(  A concrete floor can be VERY unforgiving.  But you know what?  She'll survive, and Martha will get her window finished without anything to worry about. 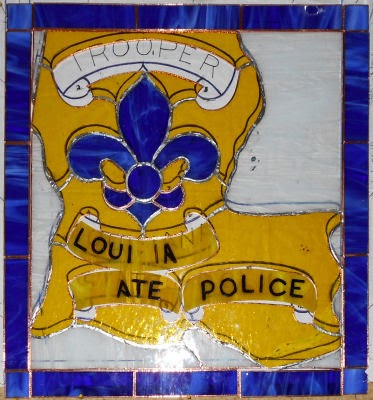 Carol's Wood Duck Window is all ground and almost completely wrapped as well.  Actually, the sky isn't ground yet, or even cut out for that matter but it will be when she comes back in.  Once this is tacked together Carol is going to have a beautiful sky with grains lines that flow and match throughout the width of her window.  (Note the use of the metal square that she's using to maintain straight lines and right angles.  That's a thumbs up right there!) 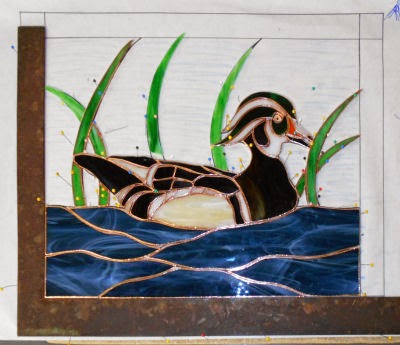 And Rowena is making this Humming Bird and Fuschia Window look downright simple.  She added her final border and then began soldering the first side during class.  He soldering was nice but she was having some difficulty deciding how much solder she should be applying to the foil.  When  she turned it over to do the second side we had her pay more attention to the melted lead at the tip of the iron rather than the line that she's soldering and her second side is looking GREAT!   It's more than halfway finished so this will certainly be completed when she comes back in to class.  I just love to be there to see everything come together for a student. Terry began working on this Fleur De Lis Window during class and she's got it all ground, tacked and ready for a quick border (or two).   Terry cut the background out of one piece of glass so the pattern in the glass is never disjointed and flows perfectly behind her Fleur De Lis.  It's an effect that you can't always achieve when working with glass, but when it can be done it's well worth the effort. 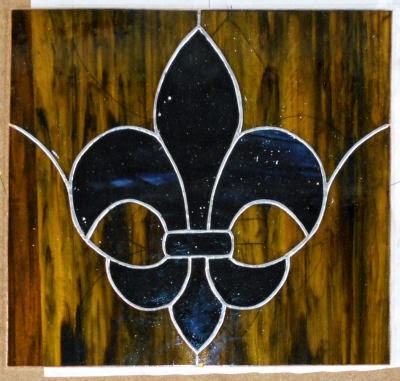 Janet has her Guitar Window all ground and ready to be wrapped.  She already began foiling her pieces in class so I don't think it will be long before you get to see this window with some light behind it revealing the varying densities of the glass which really make this window stand out.   Janet has come a long way since she first started and should be proud of her progress.

Paula has her two suncatchers all ground and ready to be wrapped.   She's taken them home with her and if she comes back in with all her pieces foiled then I have no doubt that Paula will be walking out the door with completed projects by the time her next class ends.  She did a great job on grinding these pieces, especially the Treble Clef which relies heavily on perfectly aligned pieces and nice fluid curves. 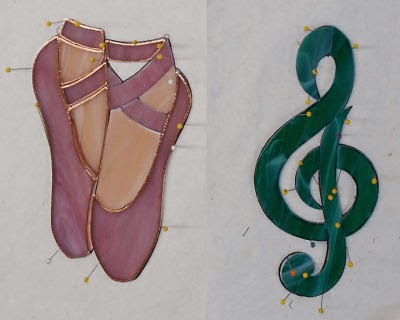 Brenda started working on her Dog Window this week and although I believe the dog's name is Baby  I could very well be wrong-- my memory isn't what it once was.  The one sure thing is that when Brenda cuts out the name and adds it to the bottom of the window there will be no longer be any doubt to the dog's name (at least in MY mind). 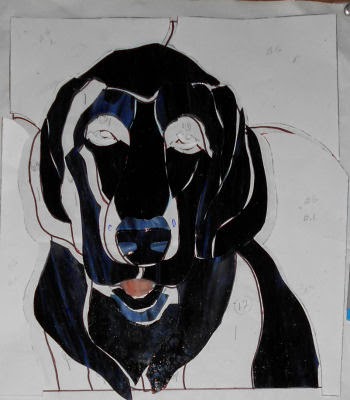 Jeannette's begun work on her Grape Cluster Window and it's going to be spectacular.  I love the glass she picked for her leaves and we found the absolute perfect glass for her grapes which she'll begin cutting when she returns next week.  This is a great pattern and Jeannette tackled the leaves with no problems at all.  I can't wait to see this one lit up.

Becky S resumed work on her Cowboy Boot and it's a good as done.  What you're looking at is the second side and the soldering is almost complete.  She's taken it home with her where she's going to try to coat the brass channel that surrounds this with lead and decorate it with her own hand made metal filigrees.  Then she'll bring it back for hooks and begin working on her next project. 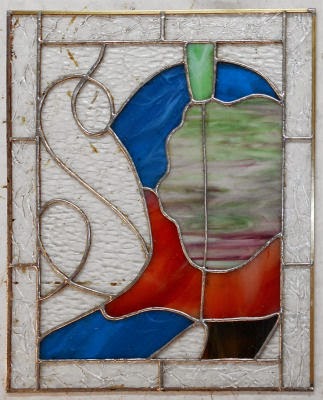 And that about rounds things up for this wee.  It will be good to get in a full week of classes next week.  It's amazing how many people we missed seeing (eight) by missing just one day of classes last week.

Posted by Bayou Salé GlassWorks at 10:58 AM