Ok, I see something done by so many students that I need to address it in this week's post.  We use two different types of pliers when making windows: Breaker(/Grozier) Pliers and Running Pliers.  Breaker Pliers are used as an extension of your hands so you aren't really squeezing them so much as holding the glass with them.  But the Running Pliers work very differently-- those you squeeze to get your glass to break along the score line.  And glass is, as we all know, delicate.  If we squeeze it to hard it will easily break where we don't want it to.  That's why Running Pliers come with an adjustment screw at the top edge.  It's easy to set but few people do it.  As a rule of thumb I always re-set my pliers if my score line is longer than 6 inches or if there's a deep curve involved.

What is the screw for, anyway?  Well, it technically sets the maximum amount of pressure that the pliers can apply to your glass.  It does this by stopping the pliers from squeezing down too far but they can also be set too high which means that the pliers won't even touch the glass let alone break it. 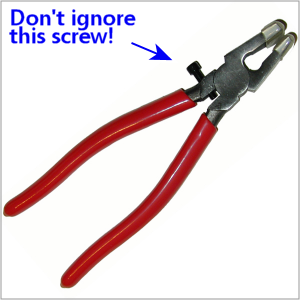 If you look at the front of your pliers you'll see that they are actually curved.  The pliers put a downward pressure on both sides of your score line while keeping the center stationary. You need to have both the left and right ends of the pliers on the glass and you should position them fairly close to the start of your score.  I see too many people push their pliers deep into the score line and that doesn't help matters especially if the pliers are incorrectly set.  Oh, and don't forget that the score line will always be in the center of the 'frown' and that the set screw will always be on the top of the pliers.  No exceptions. 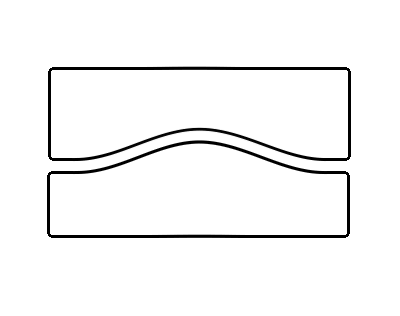 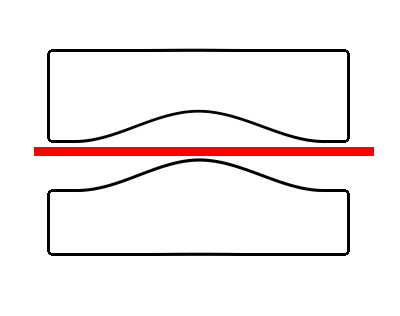 If the pliers squeeze too tight the sudden pressure will cause your score line to fracture and run  in unpredictable ways.  You can see the pliers are set to close in our next diagram.  Do you see how the glass can possibly break along 5 different places? 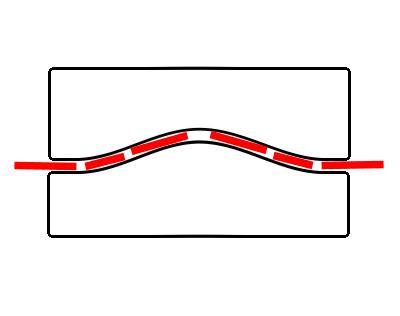 This next picture shows a correctly set pair of pliers.  When they are closed there is just enough enough room for the glass to receive pressure only along the centered score line.  We're dealing with glass so we want our pressure to ramp up slowly.  Never suddenly squeeze the pliers.  In longer cuts you'll notice that the break may not  travel the full length of the score.  When that happens just put your pliers on the opposite end of your cut and gently squeeze again.  The two breaks should meet somewhere in the middle and your glass will be cut.  Another trick that  I use is to position my hand far back on the pliers so they take less pressure to get your glass to start running along the score line. 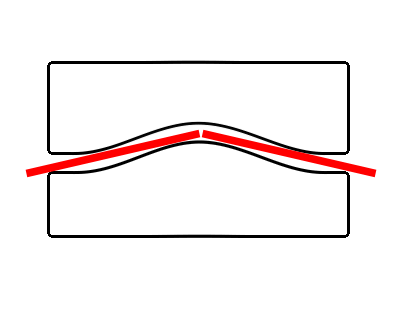 So, let's get to the important part, setting your pliers.  1) Simply turn the screw counter clockwise so the pliers are close to being closed.  2) Place the glass you are cutting in the pliers and squeeze the pliers firmly enough to hold the glass in place.  3) Turn the screw clockwise until it stops turning freely.  4)  Now back it off counter clockwise less than a quarter of a turn.   That's it.  I do need to add that you may need to make adjustments on the fly if your glass varies in thickness throughout the sheet

And lastly, remember that you are dealing with glass.  It never pays to be rough or abrupt with it.  Treat your glass gently and you'll find that cuts you never thought you could make will come out with relative ease.

OK then, on to our student windows!  Rowena had seen Martha's variation on Lynn's Humming Bird/Hanging Fuchsia window and fell in love with it.  Once she completed her Cross Window she decided it was time to make the Humming Bird for herself but in a slightly larger size.  I guess that means this is Rowena's variation on a variation.  :-)  No matter what you say about it you can't deny that it turned out beautifully.  And by the time Rowena finished the soldering on the second side she had learned how to get the perfect amount of lead on her window-- and that's 80% of the battle to soldering. 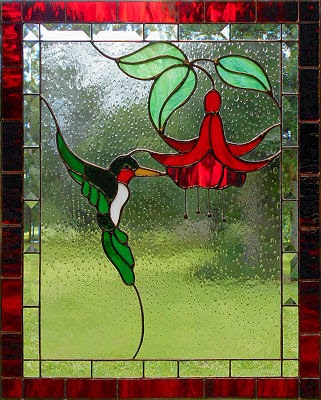 Becky S has completed her Cowgirl Boot Window and it's full of extra frills.  Becky added some wire work to the green and orange section of the boot and then to top it all off she epoxied 7 different colored gems to the the boot as well.   Look for another great project to be started by Becky next week. 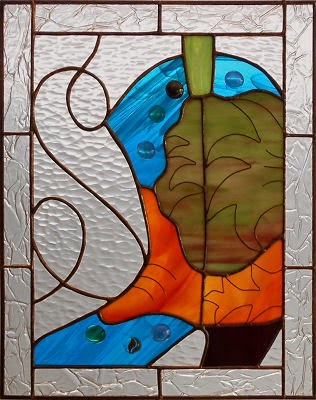 Jeanne's latest Beveled Fleur De Lis window is looking great.  She decided to go with a single border rather than adding a second smaller border.  As you can see, the brass channel really doesn't hide any of the outer edges of the bevels.  On the other hand, had this been a larger window she would have had to use a zinc channel to give it some added strength and the thicker zinc would certainly cover some of  the outer edge of the bevels.  This is a great example of how window size can affect design. 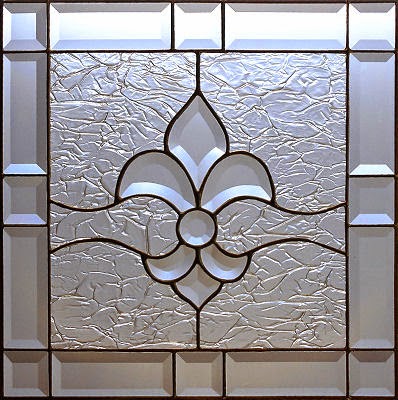 We welcomed Linda F back to class this week and she celebrated by completing her Beveled Cross Window.  She soldered the front side and then began working on the back in class.  When she was finished this is what it looked like.  Next up for Linda is a Coke Window. 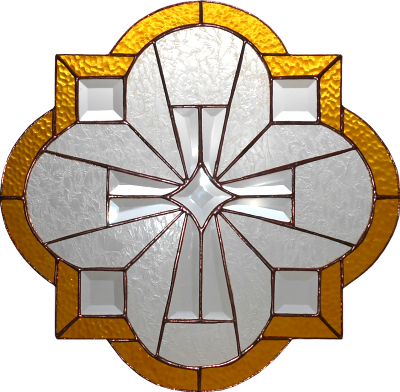 Our last completed projects are a pair of suncatchers that Paula made.  Her Ballerina Slippers and her Treble Clef turned out spectacular as you can see for yourself.  I had done the edge leading on the Treble Clef because that was really going to be a problem for a first timer-- or so I thought.  I let Paula do the slippers and let me tell you that she has the touch!  In fact, there was no retouching needed on her slipper suncatcher.  And look at how wonderfully her Treble Clef flows.  When a piece of glass disappears behind another it lines up perfectly on the other side.  And the curves all flow smoothly without any jagged sections along the way.   Paula may be new but she seems to have a firm grasp on how to make stained glass. 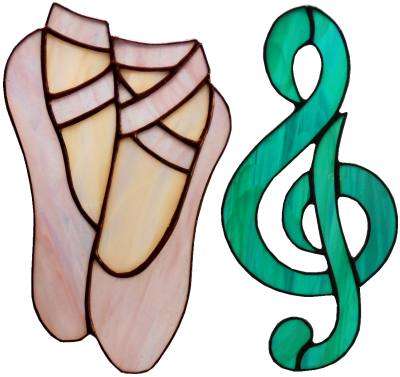 Ann's latest Fleur De Lis L Window is just eight pieces away from becoming a solder job.  She been careful about the positioning of her glass and making sure that she got as much of the lighter amber grain in the darker sections of her border.  Ann says that she plans on taking a break from this pattern and will move onto another project after this is finished. 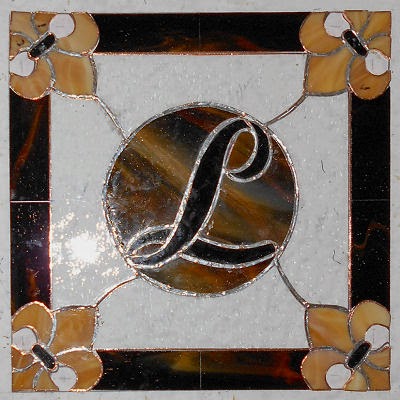 Brenda's Baby Dog is making progress.  As you can tell from the generous amount of pins (the yellow dots) she's begun to grind all of her pieces to ensure a nice even fit.  Pieces that haven't been ground have been pushed aside which makes this dog window somewhat resemble a Pablo Picasso painting right now!  That will be fixed soon enough. 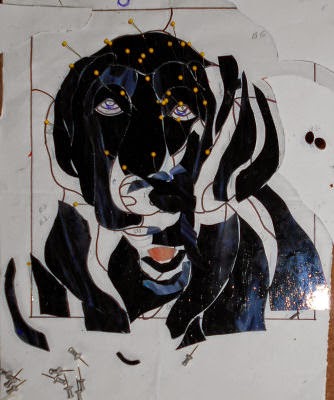 Carol's Wood Duck is very close to being ready for solder.  Her sky was cut from one piece of glass and she made sure that the whiter section of the blue was on the top portion of her window allowing for a more realistic cloud effect.  Once that was done she ground, wrapped and tacked it together and then cut out a thin inner border which she took home to wrap.  I'd say this will be ready for soldering next week. 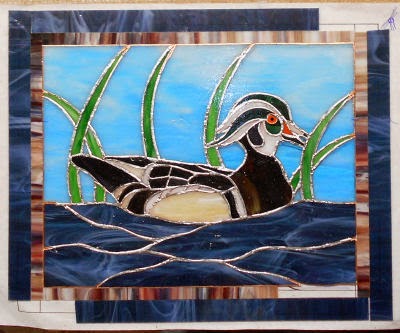 Now here's something that looks completely different.  These are Susan's Raspberries which will fill the center section of her Abita window.  Since she's altered the pattern she'll have to make some adjustments to the background pieces that she's already cut but she's made sure that this is slightly larger than the opening that already exists so there won't be any gaps.  Once this section is ground she'll tack it together and then be able to treat it as one large piece rather than 50 small pieces. 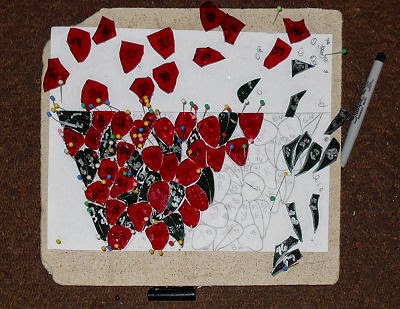 Betty has the bottom section of her Iris and Waterlilies Window cut, ground, wrapped and tacked together.  She traced out the top Iris pieces onto her glass but discovered that she didn't have enough purple.  She looked everywhere but couldn't find any more of it.  I thought it was in the large rack but when I pulled it out the glass was a different shade of purple.  When Russ came in he simply reached behind the sheet I looked at and turned up the correct piece that Batty needed so she's on track again.  And her window is looking GREAT. 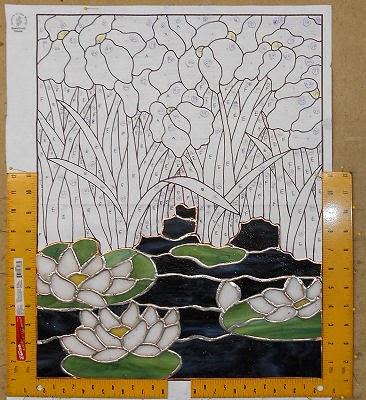 Jeannette decided to begin cutting out the grapes for her window (using the glass that I originally thought Betty was using for her Irises) after she grinds the leaves that she cut out last week.  I love the glass and she's got some good control on using the grinder because what she completed in class is fitting together perfectly. I suspect she'll be doing grape work when she comes back in.

Linda L's Mickey Mouse, which she's talked about making since she started classes, is now official.  After getting her paper pattern traced and cut out she began cutting glass.  Mickey's symbolic black ears are cut as well as her sun and the cruise ship in the background. 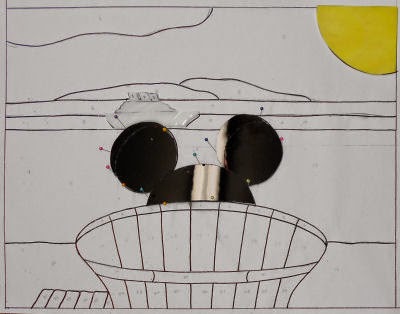 Shelley has her LSU window all ground but had an issue or two trying to straighten some of her crooked lines.  She thought she might have trimmed some pieces too small and would have to re-cut them but we simply reduced the spacing in between the letters to get everything fitted together.  Although you can see this variance on the right side of her letter 'U', once the pattern is removed no one will ever know that the letters weren't supposed to be that close to one another.

Terry's Fleur De Lis window is very near completion now.  With her border tacked in place and her brass channel added all that's left to do is solder it and then add some hooks.  And since the first side is soldered already I think that we'll see this completed in our next update. 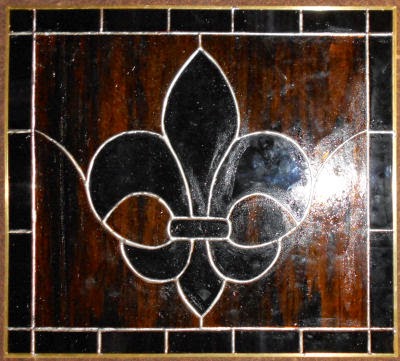 And here's where our obscure Blog Title comes into play.  With everything cut out Martha will be ready to solder this soon.  She's decided to remove the letters that she painted onto the glass and start fresh.  The only problem is that all of our paint pens are dried up.  But we have more ordered so Martha should be painting when she comes back in. 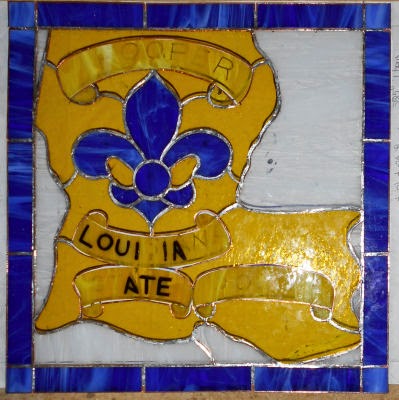 And in the end we take a look at what Cindy was doing this week.  She's doing something that all students are asked to do by friends once they discover that they know someone who makes stained glass-- repair a window.   This poor thing had a top that was completely smashed.  Cindy rebuilt it and now has only once piece left to replace towards the center of the window.  That shouldn't take long though because she already has the broken piece removed and the replacement piece cut out.

So that about wraps things up this week.  Remember to set those running pliers-- that's my secret to getting long cuts out without breaking my glass.