Well, we were going to cover foiling and the effect of 'stair stepping' (which is bad) but I forgot to take a picture today to demonstrate the problem.  So I guess we'll cover that next week.  :-)

So let's look at Carol's Wood Duck now that she's completed it.  Let's start with all the faults...  Well, since there are none let's start with the praises!  You have to admit that a double border really adds a lot to a window.  And her sky is seamless and joins together perfectly even after the leaves cut through it.  This is a class act through and through. 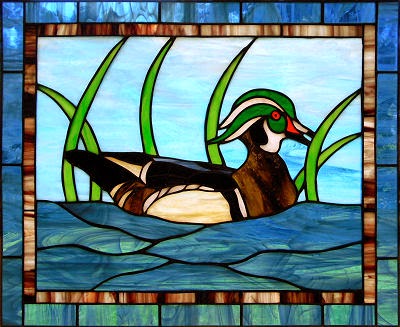 And we also got to see Janet completed her Modern Art Guitar this week as well.  As you can see her color combination work perfectly.  It was hard to tell that her background glass was clear when it was sitting on the pattern but now that it is hanging up with some light behind it you can easily make out the difference in the glasses that Janet used.  I love that the thin inner border is made with the same glass that Janet used for the bottoms of the tuning keys.  Matching a small amount of color always works well and, of course, this is another double border window and we all know how I feel about that. 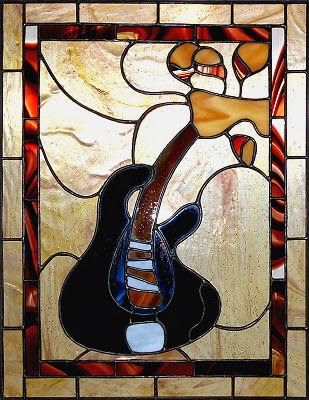 Becky S has come really far really fast with her Monogrammed 'C' window.  She has her background all cut out and used iridescent white glass for the inner background sections and clear for the outer edges to help give the window a more oval look while it's contained in a rectangle frame.  The amazing thing is that the glass in the picture below has NOT been ground which means that Becky wont be spending much time at the grinder.  Taking your time cutting always pays off in reduced grinder time. 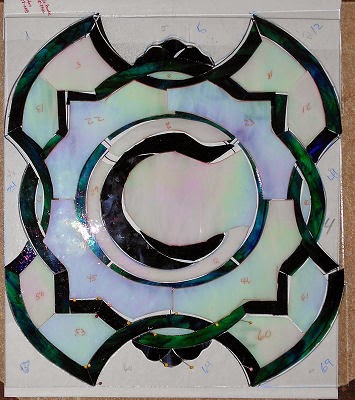 Betty certainly surprised me when she came in with her irises all cut, ground, wrapped and tacked together.  And they look GREAT!  I just love her choice of glass.  She's using two different colors of green for her stems and leaves and this week she cut out all of the darker green.  I know Betty was worried about making this project because of the number of pieces in it but she's doing just fine with it.  On second thought I take that back--  She's doing GREAT with it! 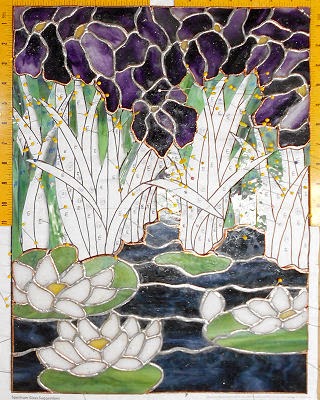 Brenda has her Baby just about wrapped now. There's really only the background and letters that make up Baby's name left for her to cut so I think the tough part of this window is pretty much behind her. Brenda constantly doubts her abilities but she always comes through in the end. I hope she sees that she has nothing to worry about and starts trusting her abilities because this dog looks great. (And I love how she added a tongue to it.) 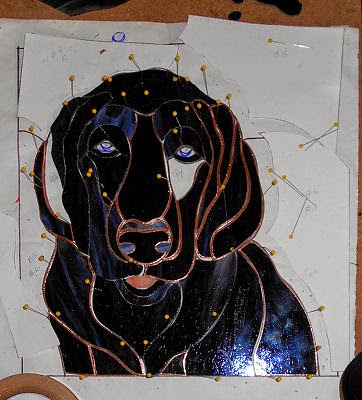 So, Carol not only finished her Wood Duck Window but she started this Tabasco Window as well.  We've seen this done once before and it had really turned out nice. I just know that Carol's will end up drawing just as much attention as the original did.  And she's already made great progress with just one class of cutting under her belt.  With the table and bottle just about completed Carol will be doing 'brick work' when she returns. 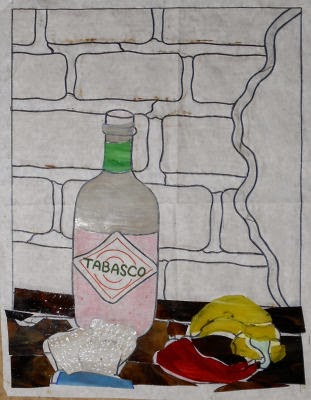 Cindy hoped to put her Magnolia lamp together this week but I never expected her to get as much done at home as she did.  I had told her that she needed three of every piece but neglected to tell her that she'd need 18 of each of the gridwork pieces.  Although she ended up being sixty pieces short she was able to start work on this Cat Tail Window.  It's going to be a nice one and the best part is that she'll only need one of each piece to make it!

Jeannette has begun the hardest part of her window and decided to start right out with the biggest cluster of grapes that she has.  By getting that one out of the way first she's going to find each successive cluster to be easier and easier-- not that she's having a hard time with this big one though.  She already has the first cluster cut out and just about halfway ground!

Linda F came in and filled in a few missing pieces in her Manger Window and then proceeded to cut, grind, wrap, and finally attach her border.  There's only the soldering left to go an then she'll begin working on her next project which I can't wait to see competed.  In fact, someone else already wants a copy of the pattern! 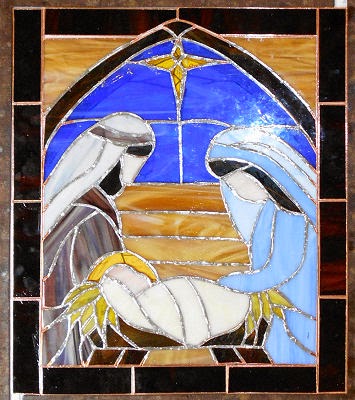 Susan's Raspberries are ready to wrap!  Once these are tacked together we will adjust the background glass to fit the new edge of the raspberries (which are slightly larger than the old cluster).  And then after that I think we'll be ready to solder this beast and get the bottles in place.

Linda L resumed work on her Mickey Mouse By The Sea Window and cut and ground the wooden chair and table. Linda picked a heavily textured glass and decided to place the rough side up to really give a wood-like effect to the chair. She's paid special attention to the grain of the glass and by subtly altering the grain lines she's accomplish a great 3D effect for her window. Just wait until you see the top edge of her wood slats. Great Job! 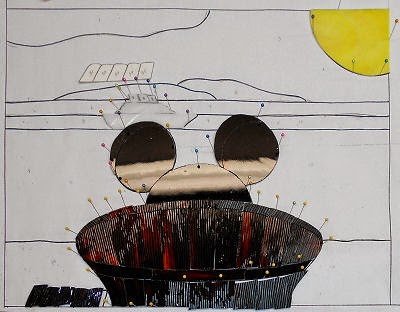 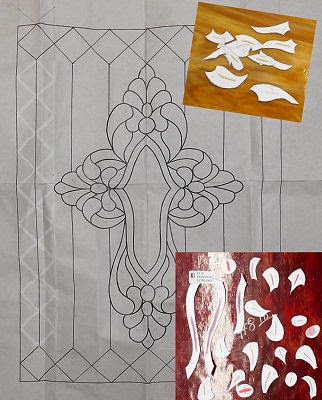 Terry brought her Convex Geometric Window all cut out and ground, just waiting to be wrapped so she diligently went to work and ended up taking home a window ready to be soldered.  Knowing Terry this could very well be finished when she comes back in next week! And Martha has her State Trooper Window almost completed.  She has her letters firmly in place and everything has been tacked together.  She even got her channel attached and has begun soldering the front side of this widow in class and has taken it home to finish the second side there.  I have no doubt that this will be a completed piece next week and that's just in time for its big event. Mary Grace cut out the flower portion of her Iris window and it is nothing if not spectacular.  The glass she picked (the same that Betty used) is a little odd to cut since the texture on the top of the glass is so rough-- It's almost like pushing your cutter over sandpaper.   But I have to say that the glass breaks well even though it doesn't feel like it should.  And Mary Grace also has her Iris ground so she's really doing well!  It's ribbons for her next week!

Myrt finished grinding the two bottom sections of her Cross window and then moved on to re-cutting the dove that will be placed in the upper left corner.  Myrt is really moving through this project quickly and it already looks great sitting on the pattern so I can't even begin to imagine how good it's going to look when its up in the air with some light behind it. 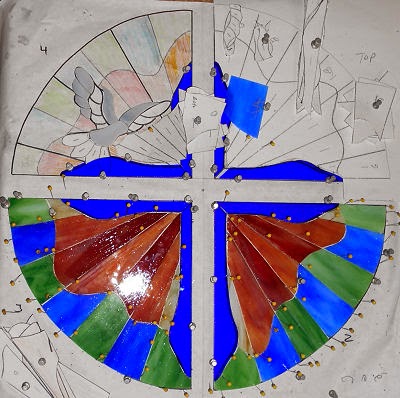 Paula's Mudkip suncatcher is nearing completion now.  With just about everything cut and ground (save for the eyes) I'd say she'll be soldering this next week.  I said this was for her granddaughter in our last post but I need to state for the record that it's for her grandson.  No matter who it's for, its certainly turning out nice.  There's no mistaking that this is a pokémon character. 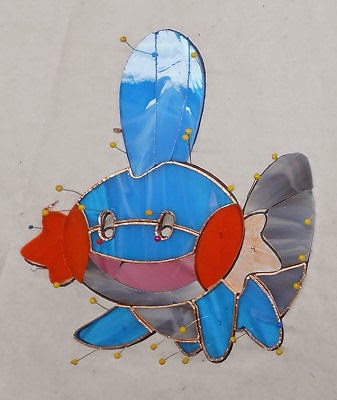 Then there's Rowena who has her grape leaves all cut and ground.  In fact, she's so close to cutting the actual grapes it's not even funny.  You may notice on closer inspection that the oval border is now missing from her pattern.  We did a few last minute alterations on her pattern and made it more rectangular rather than oval.  The shape was just a little off for Rowena's tastes so we fixed it by keeping the same grapes but squeezing in the pattern by 3 inches.  It's still going to look great though!

And then there's Shelley who now has all of her glass cut, ground and essentially wrapped (she's taken all but one piece of her purple border home to foil throughout the week.  She planned on taking all of her border but we found one piece in the driveway and that's how that story goes.  I did wrap it for her though!  Expect to see her soldering this when she returns.

And that's it for this week.  It was a busy one with most of our students attending.  We missed seeing Ann but that was my fault-- an emergency trip to the dentist made me late for class leaving Ann to find a locked door leading her to believe that we were pulling a no-show.  Sorry about that Ann!