Here's something that takes a while for students to accept.  It has to deal with pieces that come to a point and how much of the point is actually unnecessary.  When cutting a long thin point into a piece of glass we sometimes break off the point when removing the excess glass.  And even if we're lucky enough to get it to break cleanly a lot of times the point will break while grinding it.   Usually this isn't the end of the world as many students would believe.  To see what I mean just look at this example.  I managed to get this 10 inch long piece of glass cut and ground without losing any of the sharp point to the right of the piece.  Not bad, huh? 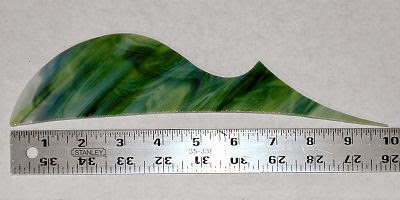 But it's not entirely necessary because, as you can see in the next picture, when I wrap my piece with copper foil I end  up losing a good portion of that point under the foil.  That means that it will end up being covered in lead even though the point exists underneath it all.  In fact, in this example I end up losing almost 1 inch of my point to foil!   So the next time you end up breaking a point off of your glass try using it anyway.  Most times no one will ever know because the point would have been covered with solder anyway. 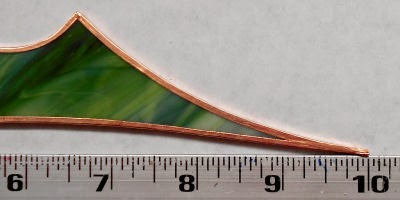 Now let's move on to our student's work and in doing so we'll start things off with Ann's latest  Fleur De Lis 'L' Window which turned out to be just beautiful.  This is her third window in this series and she's really got it down to a science now.  If you blink you might miss the fact that she was working on one and just see the finished product!  She has another to do but for now she's going to take a bit of a break and work on something else. 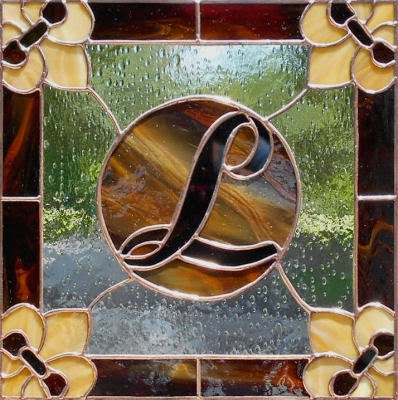 Terry's latest Fleur De Lis window is completed and ready to hang.  This is another window that Terry drew up completely on her own and I'd say she's got that whole perfect symmetry thing going on quite well for herself.  Even the grain of her glass matches perfectly when comparing the right and left sides of her FDL and that says a lot about her work. 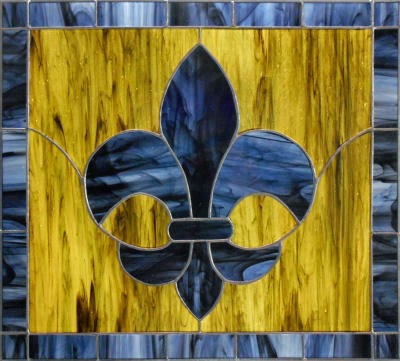 Here's a look at the 'round' window that Myrt has begun making.   She needed something with a cross in the center with rays radiating outward from the center and a dove in the upper left panel.  The problem was that there are wooden slats sectioning the window into 4 equal pieces.  Even though it's broken up I think the cross is plainly evident so it all works out in the end.  Sadly, Myrt had the dove all cut out but the pieces slid off her board and broke which means one thing:  RE-CUT!  I really think this is going to look great when it's completed. 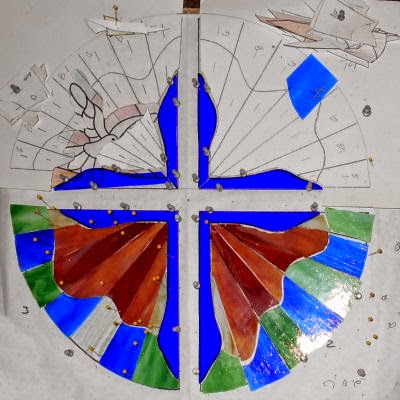 This is Terry's latest design which is a geometric convex design --judging by the curved corners.  She's working quickly on this and managed to get a lot cut out before she called it a night.  But that's just S.T.O.P. (Standard Terry Operating Procedure) 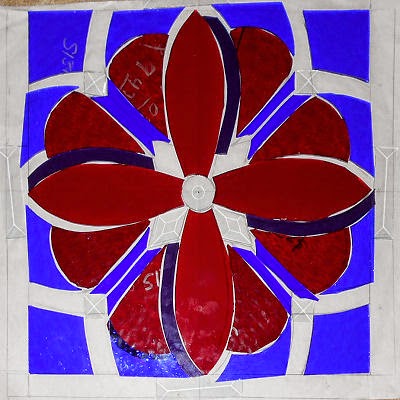 This is Mudkip and if you don't have access to video game playing children you might not recognize it as a Pokémon character.  Paula is making this bright suncatcher for her granddaughter and it's already looking like a winner!  I've discovered that determining it's gender isn't nearly as easy as you might think.  Go ahead and look it up for yourself (if you dare!) 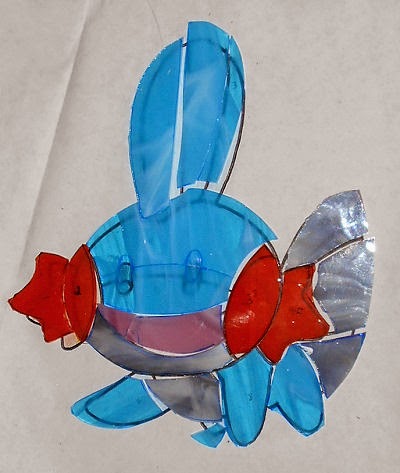 Becky B has begun grinding her Pony Window and she's doing a GREAT job! We've lost the pattern pieces for the hooves so we're just leaving them empty until everything is tacked together and then we'll just drop some glass behind the window and trace them out accordingly.  The same goes for the single piece of glass used in her sky.  With only a few pieces left to grind I think this will be tacked together before you know it! 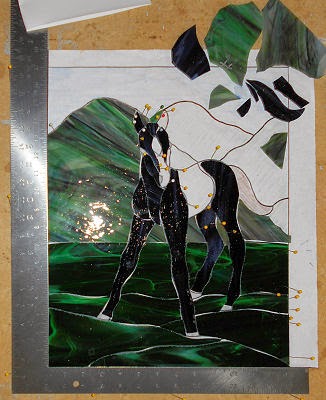 I'm loving this modern art Guitar that Janet is making.  With all the glass officially cut out she's going to be soldering this soon. Janet was concerned about what color to make her final border but we all agreed that going back to the background glass would be the best look.  We were going to be cutting it very close though because she didn't have much glass left over from the background and this glass is no longer being made, but as you can see, she did it!  And the second border just adds so much to this window. 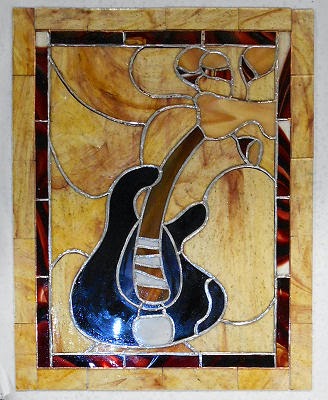 Carol's Wood Duck is ready for solder.  In fact, it's already got some solder on the front side already.  Carol took this home with her so she could work on it during the week so I think this will be a completed project when you next see it.  I almost hate saying it over and over again and again but just look at how wonderful this window looks with that thin inner border.  It really gives a window an extra hit of classiness. 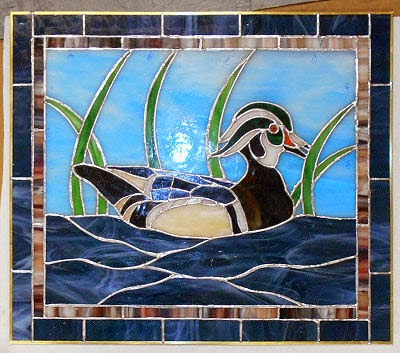 Becky S has just the background and the flourish pieces left to cut on her Monogrammed C window.  I love the  interweaving border that will become even more apparent when the lead lines are added.  Actually, the hard part of this window is now completed and I expect that Becky will be able to knock out the background glass rather easily.  What you can't see in this picture is the beautiful blue/green that her borders have been cut from.  That will change once this is lit up. 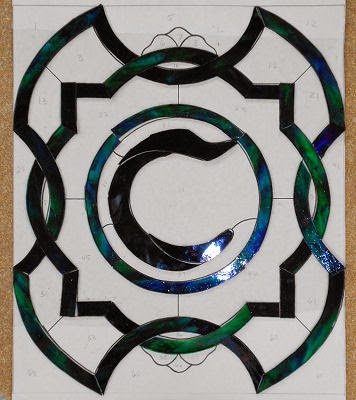 Rowena got far starting on her version of a Grape Window this week.  After tracing out her pattern on to poster board and then cutting it out she began cutting her leaves out of glass.  And she's got them all cut!  Next she'll be doing her branches and grinding everything to fit.

After completing her L Window, Ann started cutting out this Cross suncatcher that Becky and Janet have both made.  Ann is making hers out of Blue Iridescent Glass and she's reversed the blue on a number of pieces so there will be a mix of iridescence and regular blue on either side of the cross.  It's actually a very neat way to make a project that technically doesn't have a front or back to it. 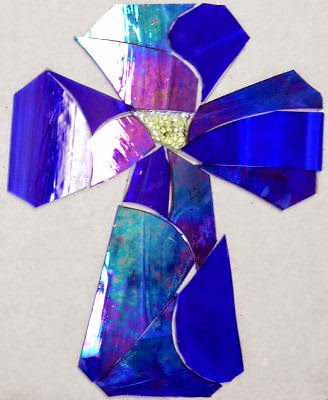 Martha's paint pen came in the day after she had her class with us so she didn't have it in time for class.  But rather than waste time she resumed grinding the Stylized Fleur De Lis Windows that she's had cut out for a while now.  Expect to see her Louisiana State Trooper Window completed when she comes back in because she'll have her letters baked onto the glass leaving the window ready for solder. 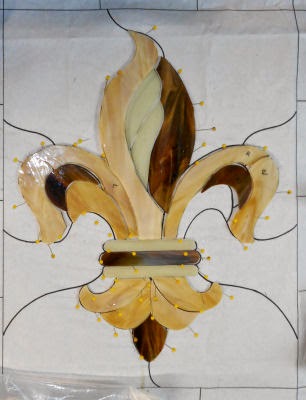 This is Jeannette's Grape Window and it's really coming along nicely.  With all of her leaves cut, ground, wrapped and tacked together Jeannette is going to start cutting and grinding her grapes one cluster at a time.  It's not going to be hard at all, just a little tedious when it comes to grinding and wrapping all of those little similar pieces.  Look for a cluster to be finished when you see this again in our next update.

Lynn is just one border away from having all of her Black Swan Ballerina Window all cut out.  Her final border will be the very light pink that she used in this ballerina's slippers.  The double border she's making will add so much to this design (not that it needs it!)  She's also incorporating a few bevels so look out! 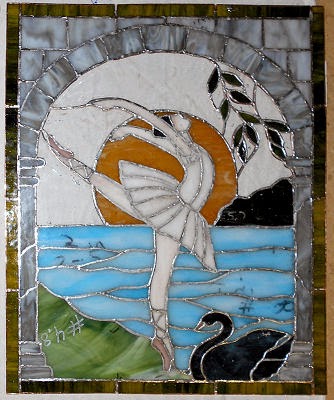 Cindy has begun cutting glass for a 11" Magnolia Lamp.  This is Cindy's first lamp but she is eager to make it and already has the pedal to the metal on this project.  With her flower petals all cut and ground I suspect that she'll be using the pistol grip cutter when she returns to cut out her background gridwork.

Jeanne liked this design that she saw on our website and decided to make a few changes to it, the biggest of which is to make it resemble a cross.  What you see below is the original design but just wait until you see how great it looks now that Jeanne has re-arranged it a bit.  There are still a few issues to work around but the centerpiece has been altered perfectly. 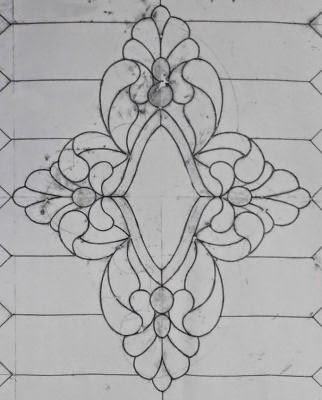 And, in the end, I'm going to show you this wonderful Iris Window that Mary Grace will begin cutting out next week.  We've made a few slight modifications to the pattern from the original design that I drew up over a year ago so that the leaves flow more naturally.   Expect to see Mary Grace cutting glass for this during her next class.

So that wraps things up this week.  Look for another update shortly along with some more tips to help make your stained glass look like it's been made by a professional.