May I See Your S?


This week we start off with another quick and simple, but very helpful, tip involving the boards that people use to pin their projects on.  Many people use ceiling tiles which work wonderfully for pinning projects down as you grind your pieces, but too many people use the wrong side of the board.  The white pin cushioned side should be face down so that the smooth even side is upward allowing your pins better purchase and less chance of shifting due to falling into one of the holes that fill the front side of the tile.  Trust me, it really makes a difference. 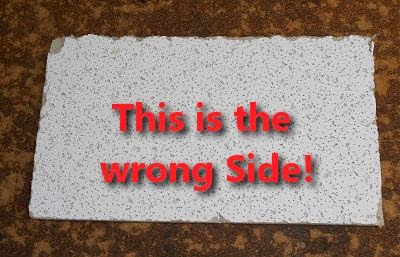 Okay, so Jane's latest birdhouse presented us with a few problems because I drew the pattern quickly during class and mixed up one measurement that affected the sides and the bottom, but Jane realized the problem and immediately made an adjustment which enabled her to get this together and completed during class.  It's a great design and Carol is going to begin one of her own as well. 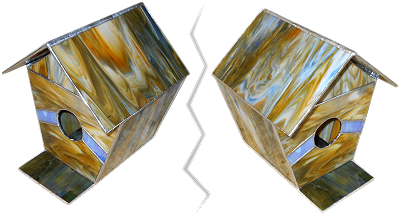 Martha's repair is now officially complete.  Normally I feel the pictures I take don't capture the textures of the glass but this picture shows the two different blues perfectly.  Martha did a great job of saving this window from being scrapped. 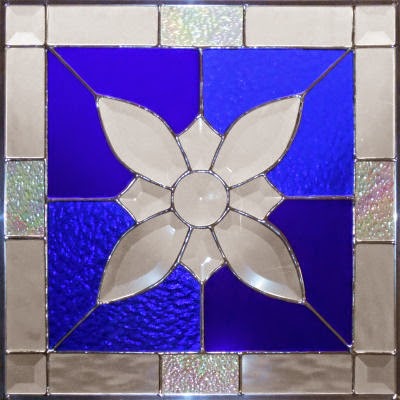 Terry's C/M Window is complete and ready to go to its owner.  The last minute addition of the diagonal bar looks like it was planned right from the start.  Terry let the letters themselves dictate the color of the background and the border.  With the letters being a blue/green mix, using each color separately was honestly the best best way to go. 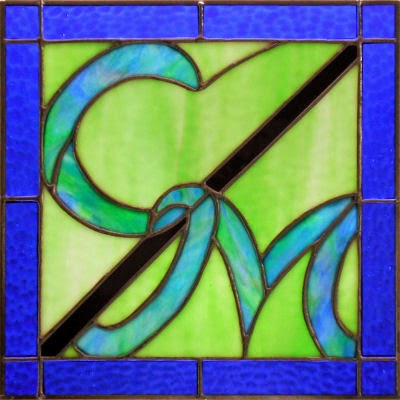 Who's in the pumpkin patch with Susan?  Just this Great Pumpkin repair which is complete AND a complete do-over unlike I had said in our last post.  It's never fun when a repair takes longer than you initially think it will but this one is now officially back in action and probably even looking better than it did the first time around. 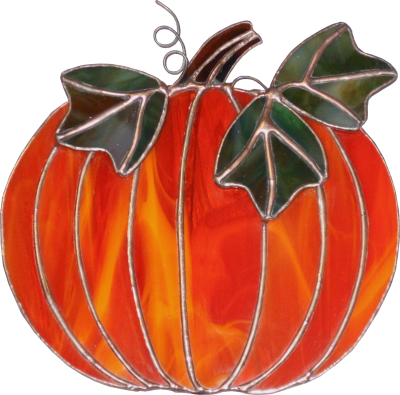 And this week we got to see all of the work that Paula acheived while she was at home.  She thinks it's been slow going but these thin curved trims are never easy.  In the past we've only dealt with two trims on this Fleur De Lis Pattern, but Paula is going the full 9 yards by making one white, one gold and then a final black trim.  Three borders means three times the fun!  At least her black glass came in so she can keep working without losing a beat. 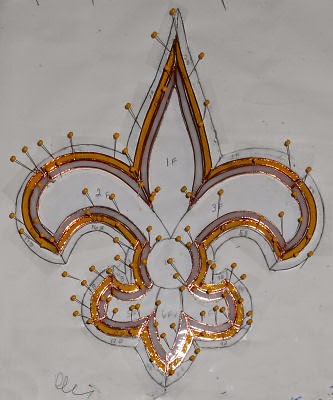 Terry had seen Bonnie's horse window and fell in love with it.  She's modified the pattern a bit to make it match the picture of the horse she's making this in tribute for and then she began cutting her glass.  Knowing Terry this one won't be long in the works. 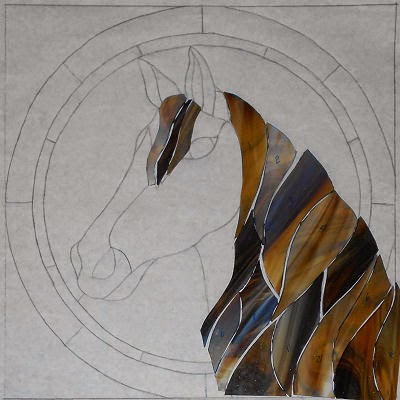 Rowena is going for broke with her latest window which is an LSU pattern complete with tiger eyes.  She'll be making this as two separate windows and then she'll just join them together as one when she adds her final border.  She's got all of the LSU section cut out already and has moved on to grinding it.  Before you know it she'll be working on her tiger eyes! 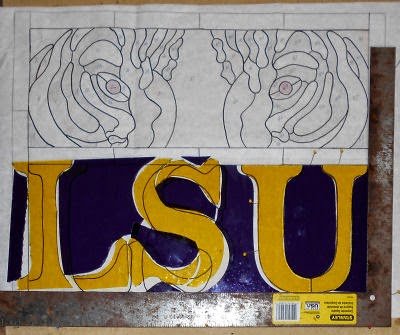 Linda L now has eight  hearts are ready to be wrapped and tacked together.  She spent her class grinding all of these pieces and has taken them home with her to wrap,  Next week she'll tack them together and then start cutting the mirrors for the centers of these Hearts.
. 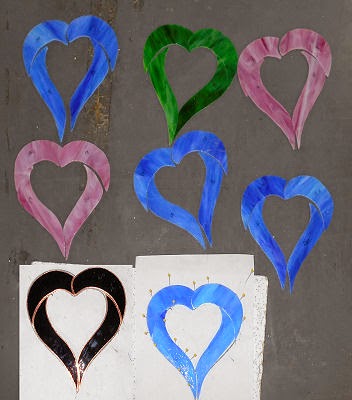 Shelly  came in and continued  wrapping her mermaids. The few pieces that she didn't get wrapped were taken home with her so she can (time permitting) come back in with everything wrapped and ready to be tacked.  Soldering is almost just a few fill in pieces and a border away now! 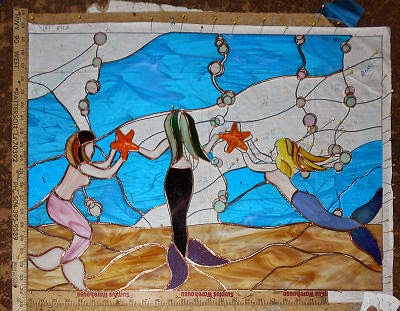 Ann's C,B, and W sections are complete along with the 12 small FDL's that will sit in the corners of each of these three initial windows.  Ann and I both agree that  Fleur De Lis' will be banned in the shop during 2015!  With just the backgrounds and simple border pieces left to go Ann will surely be finishing these 3 windows in the weeks to come.

Becky S made incredible progress on her curved Fleur De Lis window.  She's not only got it all cut out but she has it about a quarter of the way ground as well.  It's fitting together perfectly and that's no easy task because a lot of the curves in this design are so deep that they can't actually be cut.  Because of this, Becky is spending a  lot of time at the grinder getting those deep curves carved into each piece. 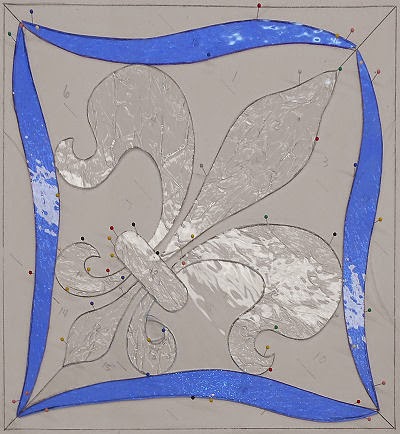 I've singled out two of the more difficult pieces that Becky has had to grind into shape below so you can appreciate all of the work she's putting into this window. Note how deeply the curves cut into each piece. 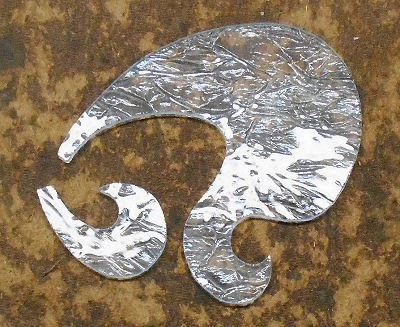 And Cindy 's lamp is just about complete.  There's  just a little assembly required and I have no doubt that will easily occur in her next class since her pieces are all cut and soldered.   Wait a minute, there are still the accent pieces to fill in but that won't take long at all.  I still say this will be completed for our next update.

Carol did some exceptional work while she was at home during the week and got all of the lion and it's trim cut and ground in her Detroit Lions Window.  After getting the lettering completed she began cutting out the background glass and will resume grinding those pieces while she's at home.  She's doing great work and is really flying through a difficult design.

Myrt has the first of her three transom panels not only cut and ground but almost completely wrapped as well.  She's decided to make the two smller windows first to help prepare her for the final larger window.  When she returns she'll solder this and then move along to the duplicate window of this pattern which will actually be installed upside down from this one to form book ends.. 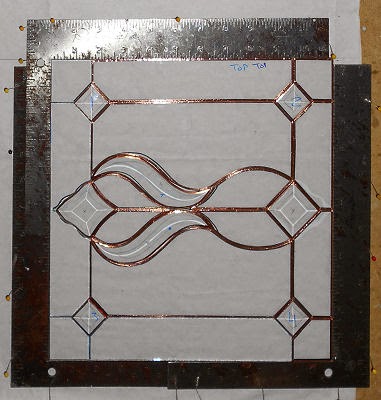 Janet  made some great progress on the transom window that she's working on that we call The Tree Of Life.  With all the soldering completed on the front side all she needs to do is solder the back and get some channel on the edges   Once that's through we'll call this window a completed project and I highly suspect that will happen when she returns.

Brenda 's  'B' window is finished save for the coloring of the lead.  She finished soldering it about five minutes before class ended and wants to color it black, but that takes well over a half hour to do so she's going to color this one at home.  Perhaps if we're lucky she'll be able to bring it back in so we can get a finished picture because I must say that she's done another stellar job here! 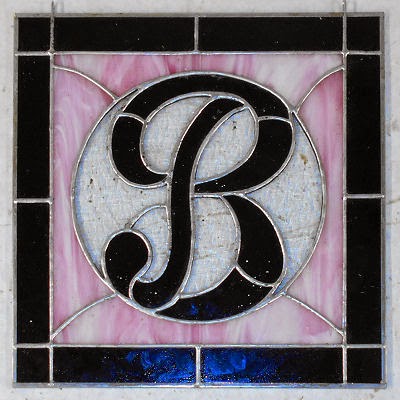 Jeanne's Stylized Cross Window is now ready for its last border.  With the center all tacked together and squared off with small triangles along the top and bottom, Jeanne decided to go with a double border to really give this design an antique feel.  The colors are striking, the workmanship is top notch and the finished product can't help but be spectacular.  I love the glass that she used for the thin inner border and can't wait to see the final border attached when she returns.

Jeannette's  shrimp boat window is all cut and ground save for the border.   She cut a piece of glass for her sky and then transferred the pattern onto that glass with a thin point marker.  Although you can't see it in the picture below the sky has been cut  into 26 individual pieces.  Since it's all been cut in place the flowing grain of the glass has been preserved which means that when its together (as it is in the picture) you can barely see the cuts at all.  However, once this is wrapped and tacked the illusion of the boat being in front of the sky will be perfect since the sky will flow unbroken behind the lines that form the ship's rigging.  And you'll see how that looks when it's tacked together next week. 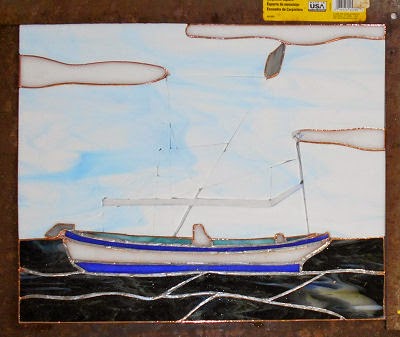 Mary Grace  is on a roll with her newest Bird of Paradise Window.  The colors are slightly different and I have no clue what she plans to do with her border but I have no doubt that this will look just as good as, if not even better, than her first Bird Of Paradise window.  Mary Grace is becoming a bit of a perfectionist striving for the perfect cut and the perfect grinding job.  And that always makes a quality window. 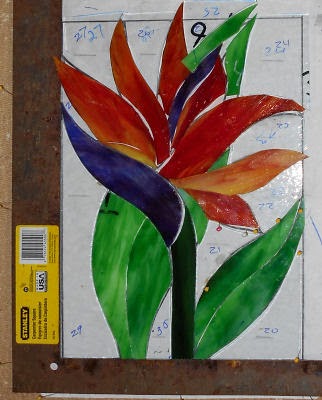 Martha  not only completed her blue window repair but also set upon redesigning an Octagon Iris Pattern.  Her redesign features Iris' that incorporate more yellow parts that I've just learned are called the 'beard' or 'signal' part of the flower.  I suspect that she'll be cutting glass when she returns next week. 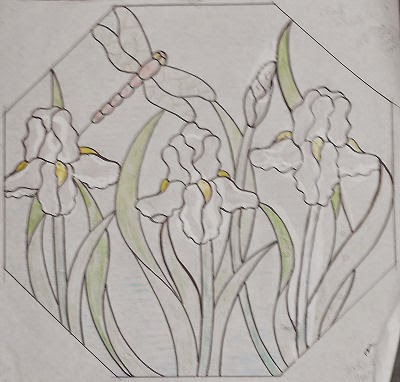 And that's it for this week.  Classes resume tomorrow night and I'm all ready!

Posted by Bayou Salé GlassWorks at 1:21 AM